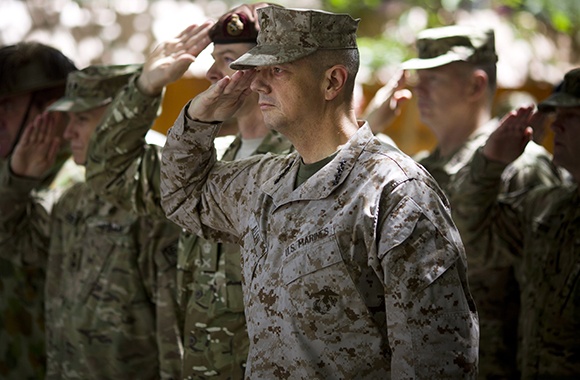 “Despite the politics around the more recent American wars, through this program we hope to signal to Brown’s existing veteran community and to incoming veterans that there is a support network here, as well as at other higher ed institutions."

Using the Humanities to Connect Soldiers and Civilians

Through its program “Dialogues on the Experience of War,” the National Endowment for the Humanities recently awarded a $100,000 grant to Brown University for a two-year project titled “Grand Sentiments in ‘Small’ Wars: Suffering and Fellow-Feeling across the Civil-Military Divide.”

The project aims to build community among veterans enrolling at Providence-area colleges while creating links both to the wider community of veterans and to civilians seeking a deeper understanding of the experience of war. It includes weeklong programs in August 2017 and 2018 for veterans who are enrolling at Brown and area colleges to equip them with the skills and knowledge they’ll need for the critical study of the humanities, and an extended series of book and film discussions led by veterans and humanities faculty, which will be open to the public.

The grant weaves together several longstanding interests of anthropologist and Watson Faculty Fellow Keith Brown, a co-director on the grant, including the ways in which reading fiction may create a pathway toward greater understanding across cultural differences.

“When you’re reading fiction you have the opportunity not to continuously refer back to ‘what really happened,’ as a brake to the imagination,” says Brown. “Instead you have an opportunity to expand the horizon, to think about what might have happened, to think more about universals than specifics.”

Years ago, Brown learned of the Marine Commandant’s Reading List—a list of books all U.S. Marines are required to read as part of their personal and professional development—and dreamed of a course where students and veterans might read and discuss the same books. This new program is intended, in part, to do just that. Participants in the two year program—civilians and veterans alike—will explore works from past conflicts “in a space that is [free of] some of the entrenched political positions that hinder open discussion of deeper principles,” says Brown.

The recent American conflicts have resulted in a proliferation of both novels and memoir—indeed, the Library of Congress lists 299 personal memoirs and 64 works of fiction for the Iraq War alone—and Brown sees value in reading both. But rather than illuminating the particular wars they evoke, he says, these works can provide key insights into this type of irregular conflict, which has occurred over centuries and across continents.

“There’s a lot of reflection these days on the parallels between the Trojan and Peloponnesian wars and contemporary U.S. wars,” says Brown, “but I felt there are stepping stones between those two periods that are, after all, 2000 years apart.”

Accordingly, the core reading list for “Grand Sentiments” includes books on the early 19th-century Peninsular War, the Anglo-Boer War of 1899-1902, and the Vietnam War. Students will read two books by former Marine Karl Marlantes: the nonfiction What It Is Like to Go to War and Mattherhorn: A Novel of the Vietnam War. Says Brown: “Reading those two books in parallel is interesting because you see the way Marlantes’s experience has informed his creative representation.”

Also on the list is C. S. Forester’s novel Rifleman Dodd: A Novel of the Peninsular Campaign. One of the striking things about this book written by a British novelist in the 1930s, says Brown, is that the reader is presented with the perspective of both the British rifleman stranded behind French lines, who cooperates with Spanish guerrillas he can barely understand, and the French unit trying to track him down. “It’s a deep reflection on the horror of war,” says Brown, “and the recognition that there are at least two sides to any conflict.”

Another goal of the project is to attract veterans, including those taking advantage of the Post-9/11 GI Bill, to College Hill. “Despite the politics around the more recent American wars,” says Brown, “through this program we hope to signal to Brown’s existing veteran community and to incoming veterans that there is a support network here, as well as at other higher ed institutions. With the increasing number of people harnessing the new GI bill, we want to help break down the perceived barriers to a first-rate education.”

The grant’s second co-director is Esther Whitfield, a professor of comparative literature and a visiting fellow at Brown’s Center for Public Humanities, which will also be involved. She is excited to be part of the project, she says, as it “draws on the reach and possibilities of literature and recognizes the ways in which scholars, students, and veterans can learn from each other.”

We are currently accepting applications for volunteers interested in serving as discussion leaders throughout the project. For more information, click here. The deadline for applications is Friday, May 5th at 12 noon.