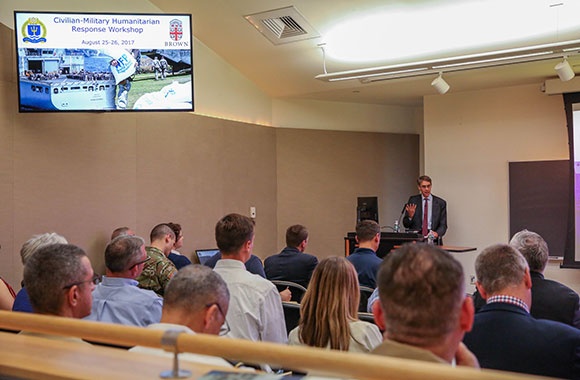 "The Geneva Convention… tried to create space where it was reasonably safe for non-combatants and humanitarian aid organizations to operate…. These fundamental norms are now under deliberate attack."

Renowned experts from around the globe convene at Watson; analyze and evaluate civilian-military responses to humanitarian disasters

We’re in a “very dangerous moment for the norms of international humanitarian law and the laws of war,” cautioned Human Rights Watch Executive Director Kenneth Roth ’77 in his keynote address to the Civilian-Military Humanitarian Response Workshop, held at the Watson Institute on Aug. 25-26.

The two-day event built on the inaugural October 2016 workshop, which the Naval War College sponsored in Newport. Acknowledging the increasing pressures on the international humanitarian system from the rising number of disasters, during which aid workers’ lives sometimes are endangered by military actors, Dr. Adam Levine, director of the Watson Institute’s Humanitarian Innovation Initiative (HI2), said that this workshop demonstrates the growing awareness among academics and practitioners research in these complex issues is vital to providing safe, effective crisis relief.

Participants were assigned to one of eight subject-specific working groups addressing such challenges as climate change, ethics and gender, international humanitarian law, increased urbanization, and pandemics. Co-convened by HI2 and the Naval War College’s Civilian-Military Humanitarian Response Program, the workshop has these key objectives:

“The Geneva Convention… tried to create space where it was reasonably safe for non-combatants and humanitarian aid organizations to operate…. These fundamental norms are now under deliberate attack,” said Roth, in the workshop’s keynote address. In deconstructing the situations in present-day Syria and Yemen, Roth reminded the 100 attendees, all of whom are engaged in humanitarian issues as practitioners, academics, or military officials, “The stakes are too high to allow these essential norms to be undermined for the political calculations of the moment.”

As President Bashar al-Assad’s government deliberately targets civilians and civil institutions in areas held by the armed opposition, and besieges hundreds of thousands of civilians, Syria is at the epicenter of this threat, said Roth, noting that Russia’s veto of United Nations Security Council action has enabled Assad to commit these war crimes with impunity. While a recent U.N. General Assembly vote empowered a French prosecutor to pursue Syrian war criminals, the next step is to create a tribunal for the prosecutions. Roth believes a General Assembly-mandated tribunal will be a critical tool.

By opposing international investigations, the United States and other Western powers are complicit in the abuse in Yemen, said Roth, who urged more focus on what’s causing massive fatalities: blockade-induced starvation and the destruction of medical and sanitation facilities. As a result, Yemen is now home to the world’s largest cholera epidemic, and 7 million people face famine.

As for the U.S. government’s own military operations, Roth is concerned that lessened oversight of the rules of engagement could lead to more civilian deaths in Syria, Iraq, and Afghanistan. While the rules of engagement haven’t changed, President Trump’s willingness to delegate to lower levels of the military hierarchy the ability to launch attacks—a departure from his predecessor’s more deliberative approach—deserves heightened scrutiny.

Roth fielded questions on such troublesome topics as refugee migration patterns, the role of the U.N. Security Council, and the International Criminal Court—the court of last resort to prosecute genocide, war crimes, and crimes against humanity—and whether government entities should engage with a non-state actor like ISIS.

“We’ve seen great examples of civilian-military collaboration—such as with the Ebola crisis in West Africa, where the U.S. Navy processed all the lab work for the Ebola Treatment Unit I managed for the aid organization International Medical Corps,” said Levine, also an associate professor of emergency medicine at Brown University’s Warren Alpert Medical School. “On the other hand, in Syria and Afghanistan, direct collaboration may not be appropriate, but there still needs to be co-existence to make sure humanitarian actors aren’t caught in the cross-fire.”

“In classic Brown and Watson fashion, the interdisciplinary workshop brought together military officials, humanitarian workers and academics to discuss the best way to deliver aid to people in need in times of crisis,” Roth said, after his keynote presentation. “The extraordinary talent and experience in the room, and the rich conversation, will be felt as humanitarian aid reaches people more quickly and effectively.”