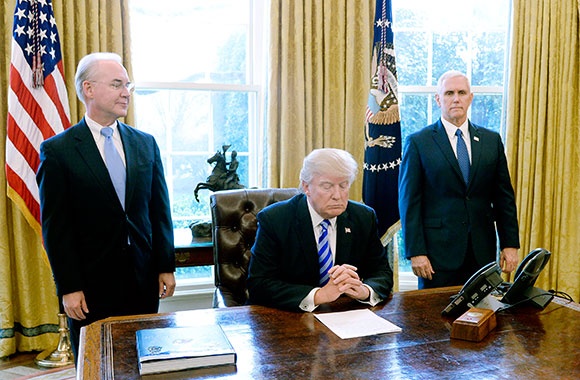 "...now that the Republicans hold both the White House and Congress, what is likely to happen? To address this question, I invited the nation’s leading scholars of health policy to attend a conference at Watson and share their perspectives and insights."

Eric Patashnik, Julis-Rabinowitz Professor of Public Policy, Professor of Political Science, Director of the Brown Public Policy Program, and Editor of the Journal of Health Politics, Policy and Law, spoke with us about a conference he hosted at the Watson Institute on May 19th, 2017. The event, “Health Policy after the 2016 Election,” brought together some of the country’s leading minds in health policy research to discuss the future of healthcare and the Affordable Care Act under a Republican-controlled government. Papers written for the conference will eventually be published in a special issue of the Journal.

Watson Institute: What spurred the idea for this conference?

Eric Patashnik: As editor of the Journal of Health Politics, Policy and Law (JHPPL), I have the opportunity to organize academic conferences on healthcare topics of current scholarly and policy interest. I am grateful to the Watson Institute for providing financial support for this event. With Donald Trump’s victory in the 2016 election, a question on many people’s minds is what does this mean for the future of healthcare and the Affordable Care Act? I’d written about the partisan and ideological battle over the ACA, but now that the Republicans hold both the White House and Congress, what is likely to happen? To address this question, I invited the nation’s leading scholars of health policy to attend a conference at Watson and share their perspectives and insights. Papers from the conference will appear in a special issue of JHPPL next year.

WI: What were your goals for the event?

EP: My main goal was to place the current fight over the ACA in a broader historical and institutional perspective. Scholars presented papers on a variety of topics, including the role of the ACA in reducing health disparities; conservative opposition to redistribution and expansions of the public sphere; the future of Medicare and Medicaid; and what the ACA repeal struggle says about the resilience of the American welfare state.

WI: Did conference participants reach any consensus on what we can expect to happen to health policy while Republicans are in control of Washington?

EP: Interestingly, there was no consensus among the participants on what will happen. Some scholars argued that the Republicans will not be stopped in their effort to remake the ACA. These scholars emphasized the strength of the organizational and ideological forces pushing the GOP to adopt conservative policy stands. Other participants said the Republicans’ ACA repeal drive is encountering resistance from powerful stakeholders including hospitals and governors, and that the effort may well fail in the Senate.  This lack of consensus about the fate of health reform underscores the contingency of politics, and that we are living in a period of unusual political uncertainty. Perhaps the most interesting aspect of the conference was that scholars debated not only the future of the ACA, but also whether the received wisdom about the status quo bias of American political institutions and the difficulty of dismantling major social programs still holds in an era of partisan polarization.  At a time when scholars are asking fresh questions about how American democracy works, the Watson Institute is at the center of the conversation.