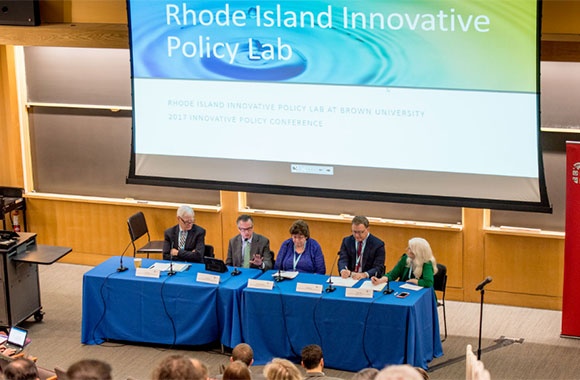 "By testing various approaches and conducting field projects we can measure causal impact and provide a blueprint for other states to adopt similar approaches.”

On June 15th, more than 250 federal and state policy leaders, academics and community organizers from across the country attended the first annual Innovative Policy conference. The conference was held by the Rhode Island Innovative Policy Lab (RIIPL), a unique partnership between Brown University and the Governor’s Office of Rhode Island. The lab combines data science and behavioral economics to unlock the power of data and science to improve policies, alleviate poverty, and increase economic opportunity. Dr. Justine Hastings, director of RIIPL and Professor of Economics and International Affairs at the Watson Institute at Brown University, organized the conference to bring together experts in public policy and push forward data-driven solutions to pressing challenges in the real world.

Over the past few years, fact-based policy has become the forefront of national policy. In 2015, the Obama administration unveiled an updated strategy for American Innovation, which stressed research and development to continue to push innovative policies. The Innovative Policy Conference sought to highlight this development over the course of four impactful sessions where policymakers shared how governments and researchers can work together to use fact-based evidence to improve lives.

Demetra Nightingale, Chief Evaluation Officer for the U.S. Department of Labor, explained how she institutionalized a culture of experimentation and evaluation. “Two words,” she said. “Relevance and rigor.” Nightingale went on to say that evaluations must be “relevant to program administrators and political leadership.”

Following up on relevance, Robert Doar, Morgridge Fellow in Poverty Studies at the American Enterprise Institute, remarked: “We need to connect our effort to [making] changes that lead to positive outcomes. After a while, people get tired of hearing about evaluations if they don’t lead to better outcomes. We need to lead with evidence-based changes.”

Ron Haskins, Senior Fellow and Cabot Family Chair in Economic Studies at the Brookings Institution, also noted that a focus on replicating government programs and measuring their impact is a crucial part of fact-based decisions. “We don’t replicate our programs enough… that’s what we need to do to move the needle on our social problems,” he commented during the panel.

The Power of State-Lab Partnerships

The second panel highlighted the many successful fact-based initiatives developed and proposed by the Rhode Island Innovative Policy Lab, echoing Nightingale’s point that “Rhode Island is [at] the top of doing innovative public policy.”

At the forefront of RIIPL’s analysis is a comprehensive and anonymized database known as the RI 360 database. According to Mark Howison, Director of Data Science, “Having access to this clean, anonymized, organized database is really a cornerstone of the research and policy work.”

The panel emphasized RIIPL’s approach to making effective policy. Amamah Sardar, RIIPL’s project manager for Departments of Corrections projects, spoke about RIIPL’s collaboration with the Department of Corrections to meet the Governor’s goal of reducing recidivism in Rhode Island. Using cutting-edge analysis and fieldwork, RIIPL identified two simple, innovative programs to reduce recidivism at little to no cost to the taxpayer. “By testing various approaches and conducting field projects,” Sardar said, “we can measure causal impact and provide a blueprint for other states to adopt similar approaches.”

State government officials noted how working with RIIPL allowed for faster analysis and inter-agency collaboration. “Having a partner in RIIPL who can [run analyses] very quickly [makes] a big difference,” Kimberly Paull, Director for Data and Analytics, RI EOHHS said. Benjamin Shaffer, Director of Performance Management for the State of Rhode Island, also noted that the government faces challenges in connecting departments to “work across agencies and… breed operational improvements.” RIIPL’s recidivism projects, he noted, allowed for the opportunity to solve problems with “cross-agency data.”

The panel ended with some advice from Dr. Hastings and RIIPL. This included having a high tolerance for failure, from which productive lessons can be learned; maintaining testing’s rigor and fidelity as the model is scaled up; and working collaboratively with government partners while being mindful of academic integrity.

The third panel brought together academics and directors of research labs to discuss academic-public research and the value of bringing an outside party in to help governments leverage data and optimize policy.

Jens Ludwig, director of the University of Chicago Crime Lab, argued for the power of “nudge interventions” like RIIPL’s which employ small, scalable changes. With costs close to zero and potentially huge benefits, these interventions have potentially enormous ramifications for the state, he explained, citing a nudge at Riker’s Island in New York City where making court summons forms more eye-catching decreased the amount of missed court dates from inmates.

Quentin Palfrey, the executive director of J-PAL North America, noted that partnerships between policy labs and state governments are so productive because “state… policy makers are in the position of innovating to deal with complex change and they act without the benefit of rigorous evidence… [while] the academic community is interested in identifying innovative interventions but don’t know what struggles and challenges people are trying to deal with in cities, counties, and states.”

Other panelists including Joshua Cowen, an Associate Professor at the College of Education at Michigan State University, also encouraged this model stating that “budget constraints, interagency legislative pressures, [and] strategic plans” that state governments face create a unique space for labs to add value by supplying the evidence and research design to help make good policy.

In the fourth panel, panelists from state governments across the country and the federal government discussed the ways in which data and research can be used to make policy more effective.

From Rhode Island, Macky McCleary, Director of the Department of Public Utilities Commission, and Eric Godwin, the Director of the Office of Regulatory Reform, spoke about how facts, data and research can shape sound policy decisions by both pointing you in the right direction, and steering you clear of pitfalls.

“Data can be turned into policy, but [we’re] really talking about information,” said McCleary. “Actionable information suggests a certain path.”

Godwin followed up on this by pointing out that data and research “allow you to identify bad ideas much more quickly… helping you find marginal benefits and compare across programs and evaluate in a transparent way which programs are doing well.”

Robert Sivinski echoed the need for data from his viewpoint as a senior statistician in the federal Office of Management and Budget. “Regulatory development that incorporates cost-benefit analysis,” he said. “It’s a guiding principle that can bring folks together and form consensus. Even in the absence of consensus, it can move negotiations into a more productive space.”

Overall, the conference afforded a unique chance for policymakers across the country to collaborate and begin a larger movement towards fact-based policy. As RIIPL expands to form regional collaborations in the future and foundations fund more lab-style funding models to support similar efforts, future conferences can showcase the fruits of state-lab partnerships across the country.