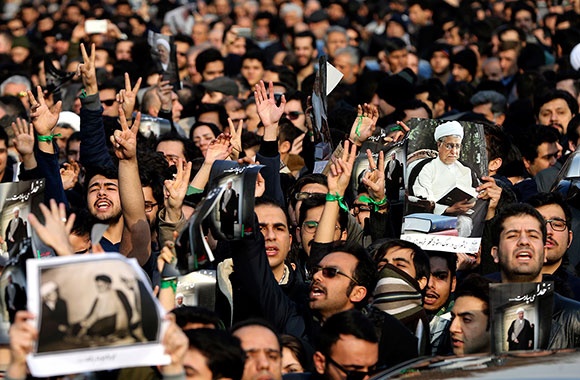 Are Iranian Protests a Sign of Reform to Come?

Tehran's streets filled once again with chants for reform and against dictatorship on January 10, 2017. Two and a half million people, by official estimates, joined the public procession for the funeral of Akbar Hashemi Rafsanjani, one of the founders of the Islamic Republic, and the former president of Iran (1989-1997). Large groups of mourners turned the procession into a reminder that the desires of the Green Movement, now eight-years old, and the movement for systemic reforms, nearly 20-years old, do not die because of authoritarian suppressions.

As one of the most politically astute, pragmatic, and controversial politicians in modern Iran, Rafsanjani was one of Ayatollah Khomeini’s right-hand men, helped picked Khomeini's successor, Ali Khamenei, and led Iran in it’s post-war years in the 1990s. Rafsanjani was privy to most key decisions during the first two decades of the regime, including: the decision to turn the war on Iraq from a defensive war into an offensive one, effectively prolonging it for another six years; the violent suppression of political dissidents not in line with the Islamic Republic during the 1980s; the killing of dissidents both inside and outside Iran while he was president in the 1990s; and, the institutionalization of neoliberal economic policies that included making him and his family one of the richest in Iran. He was so unpopular after his presidency that when he ran for a parliamentary seat in 2000, he failed to be elected as one of Tehran’s 30 representatives, and he lost in the 2005 presidential elections to populist Mahmoud Ahmadinejad.

Yet, after the election of Ahmadinejad, he began to transform himself and take the side of reformist. He became the head of the Assembly of Experts and the head of the Expediency Council. Increasingly at odds with the very Supreme Leader he helped pick, Rafsanjani and his family, including his politically popular daughter Faezeh Hashemi, ultimately supported the Green Movement candidate for the 2009 presidential elections, Mir Hossein Moosavi. Rafsanjani also threw his support behind the protestors who took to the streets during the contested outcome of that election. He became an important source of support for the reform movement, as one of the revolution’s elders. In a public sign that the relationship between Rafsanjani and Supreme Leader, Ali Khamenei, had taken a turn for the worst, Rafsanjani was disqualified in 2013 by the Guardian Council in his bid to run for president once again. A believer in repairing Iran’s ties with the west, Rafsanjani supported one of his protégés, Hasan Rouhani, in his successful 2013 bid for the presidency.

In post-2009 Iran, reformist-leaning Iranians viewed Rafsanjani as the one who could stand his ground against the Supreme Leader and help keep the road to moderation and reform open. When news circulated that former reformist president, Mohammad Khatami (1997-2005), was banned from attending Rafsanjani’s funeral, Khatami encouraged his followers to attend the public procession as a signal of support. As one woman boldly said in a cell phone video that circulated on social media: “I am not here because of the Supreme Leader. I don’t support him. I’m here because Khatami said we should show our support.” Faezeh Hashemi reportedly affirmed to the public that Khatami had been banned from attending, and she flashed the victory sign to groups who were chanting slogans from the Green Movement protests.

During the public procession, mourners chanted so loudly in support of Mir Hossein Mousavi and Mehdi Karroubi, both presidential contenders in 2009 who have been under house arrest since 2011, that state television broadcasters had to air parts of the processions without audio. Tellingly, cellphone footage showed people chanting louder when they spotted state television crews, as they said in unison: “we are the media of the people,” reminiscent of a chant in 2009 when state television refused to air footage from the protest.

The 2009 Green Movement protests, the biggest in Iran since the 1979 revolution, shook the political elite in the country to its core. With chants of “Down with the Dictator” echoing loudly on the streets of most major cities and towns across the country, the Supreme Leader ordered the paramilitary and riot forces to crack down with a vengeance. The arrests and suppression following the Green Movement protests were on a level unseen in Iran since the first decade of the revolution. Yet, the public procession for Rafsanjani’s funeral on January 10, 2017, showed that the desire for reform and for policies that move away from the Supreme Leader continue to live in the hearts of many Iranians. And most importantly, it showed that public displays of protest are still ready to erupt, despite years of sustained suppression.