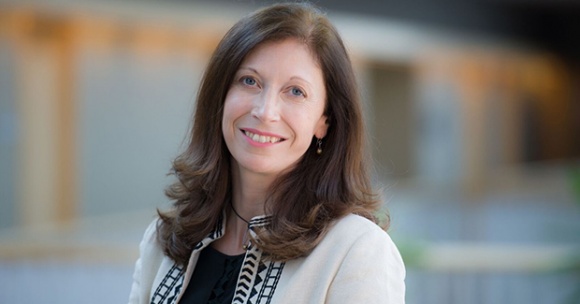 Susan Moffitt, director of the A. Alfred Taubman Center for American Politics and Policy

Watson and the Taubman Center: It's All International

Susan Moffitt, a political scientist who specializes in American political institutions and public policy, became director of the A. Alfred Taubman Center for American Politics and Policy on July 1, 2017. Here she shares thoughts on her research and teaching as well as her vision for the Taubman Center in the year to come.

How do you see the Taubman Center and the Watson Institute working together?

I hope to continue the process of integration. When I was on sabbatical at the Radcliffe Institute a few years ago, I came to appreciate how much more I could learn about my fields of inquiry—whether it’s regulatory politics or the American welfare state—when I look outside the U.S. borders. Now when I teach my course on education and inequality in American democracy, I look north to Canada and south to Mexico. Studying these other fragmented federalist systems and how they’re addressing issues like inequality and education has been deeply illuminating in my own teaching and research.

What programming have you planned for Taubman this year?

The year will be organized around three themes: the cost of living, the value of democracy, and the price of security.

Mark Blyth gets credit for helping me develop the first theme. We are thinking about the cost of living broadly to include frameworks for understanding issues such as environmental sustainability, health disparities, unemployment, among others.

One of the ways we’ll be exploring the value of democracy is through our annual Anton/Lippitt Conference on Urban Affairs, which will focus on “Citizenship in the City.” Scholars from across the United States have agreed to come to Brown in January to discuss issues including access to voting, schooling, policing, immigration, housing, and social service provision in American cities.

We’re also looking at several different aspects of the price of security.  For example, I would like for the Taubman Center to support the Dialogues on the Experiences of War effort that Taubman affiliate Esther Whitfield has helped to implement.

I’m also hoping to cultivate our partnership with the Naval War College to support its annual conference on Women, Peace, and Security. The conference has a global approach while connecting with core aspects of American politics and policy, including how the U.S. can learn from the gender dimensions of peace and security in other countries.

Will Taubman’s close partnership with Watson affect how you approach your own work?

It already does. As I study what’s going on in American politics and policy—the nuts and bolts of how federalist systems work and how ideas course through these spaces—the global approach helps me as a researcher.

For example, one of my new research projects is on the flow of ideas related to the Common Core education standards. Some non-profit organizations and organizations that represent state governments played key roles in launching Common Core standards. When we look at how those ideas get picked up in classrooms, we see that some of it is through law and some of it is through informal networks—teachers sharing ideas and resources on the internet, like Pinterest. They’re swapping lesson plans. The flow of ideas about rigorous teaching isn’t necessarily following conventional boundaries that we typically study in American politics and policy. I find myself looking to international relations, and its work on boundary spanning and on the flow of ideas, to inform my research.

Do you consider yourself an activist as well as a scholar?

One of the best ways I can be politically active is through high-quality research.

Here’s one example. The FDA releases information to communicate safe and effective drug use practices. Who has access to those messages? Who can make sense of those messages? Does that messaging exacerbate disparities? Are there ways to improve that messaging? How do we ensure that someone without a PhD can understand a warning the FDA sends out when they have concerns about a certain drug that you might be taking for diabetes? Research that answers these kinds of questions has the potential to inform policy, practice, and citizen decision making, and is a form of activism.

Recently, some colleagues and I were encouraged to get an article out the door soon after the 2016 election, even though it wasn’t quite ready. But, because we see our scientific rigor as fundamental, we decided to put on the brakes.  We’ll release it when it’s ready and meets appropriate standards of social science.

This rigor is more important than ever. Last spring as I was explaining to my class that we need more and better research, one of my students asked, “But don’t we live in a post-truth era?” I sat there stunned at the question. After I collected myself, I replied that now more than ever we have to do more rigorous science and make our scientific method transparent. This is not the first time that science has been under attack, but it is under attack in new ways and from new directions. It’s up to us to step up our scientific game and make our science accessible, even if the results of our research don’t align neatly with our broader political views.

How would you describe your leadership style?

My second book is on participation and agency-policy making. We reach better decisions when we have a common set of goals, and when people collectively approach those goals with different areas of expertise. Diversity of views will help us to reach better outcomes. One of the things that has delighted me as I put together this list of programs for the fall is that I am only moderating two of them; my colleagues are moderating the others. Participatory leadership means building a community of scholars and practitioners who want to work together, and using the center to support their research and teaching.  Another essential feature of inclusive leadership for me is investing in the training and mentoring of students at all levels and early career researchers. Building capacity is vital to the continuity of vibrant and innovative research, and so I intentionally seek to grow training opportunities into research projects.