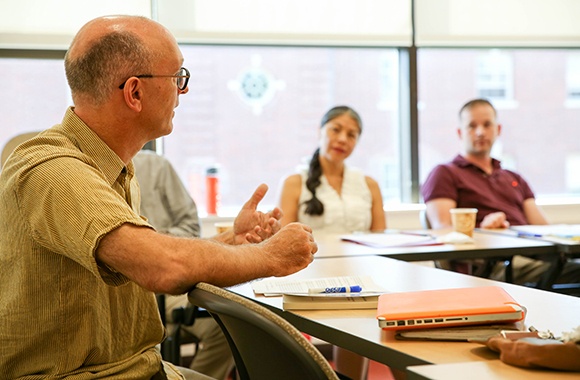 “I liked the cross-pollination of ideas and how people’s backgrounds, studies and focus adds to the conversation. They got as much out of it as we did; veterans love to talk about [the] military. It’s an experience that…molds you and your character and persona.”

National Endowment for the Humanities grant brings "Irregular Warfare: The Experiences across the Civil-Military Divide" to life

“Fiction puts you in the skin of others, even those very different from you. It helps you see what you all have in common, rather than what’s different,” advises Helen Benedict, a novelist, journalist and Columbia University professor of journalism. Fiction helps to create that essential bridge between civilians and military and promote compassion for them and for refugees, she says, so we can fight stereotypes and prejudice.

Benedict’s Oct. 26 presentation at Brown University was part of the Watson Institute’s program, “Irregular Warfare: Experiences across the Civil-Military Divide,” supported by a National Endowment for the Humanities grant. The program focuses on building dialogue and enhance understanding between the one percent of Americans whose families serve in the military and the remaining 99 percent. Benedict spoke about Wolf Season, which focuses on American veterans and Iraqi refugees affected by the Iraq invasion, and follows characters from her 2011 novel, Sand Queen.

Watson adjunct professor Keith Brown co-directs the program with Esther Whitfield, associate professor of comparative literature and Hispanic studies. We need to mutually recognize, that ideas deeply revered by military personnel – service, honor, loyalty, duty and sacrifice – are not confined to the military, says Brown, who is also director of The Melikian Center: Russian, Eurasian and East European Studies, and a professor at the School of Politics and Global Studies at Arizona State University. Capturing the essence of the civil-military divide, he asks: If the military are trained not to be empathetic with those who are different and to make the other “the enemy,” what do they do when they return to civilian environments?

Earlier this summer, 14 individuals with academic and/or military backgrounds gathered for a two-week “boot camp” to design and plan a program for student veterans, says Whitfield. “We read literary texts and supporting materials, designed discussion guides and took advantage of our own different backgrounds as well as visiting speakers’ expertise to learn about differences and similarities between military and academic culture.”

In August, Watson hosted student veterans from five local colleges or universities, who were matched with faculty and graduate students for in-depth readings and discussions. Denny Cosmo, a Bryant University student and U.S. Army staff sergeant who served two tours of duty in Iraq, enjoyed talking one-on-one with professors with diverse expertise during that three-day workshop. “I liked the cross-pollination of ideas and how people’s backgrounds, studies and focus adds to the conversation,” says Cosmo. “They got as much out of it as we did; veterans love to talk about [the] military. It’s an experience that … molds you and your character and persona.”

“I was impressed and excited by …the curiosity and careful reflection [that] student veterans brought to the August program,” says Whitfield. Discussion leaders had read Sand Queen and Wolf Season together, and program organizers invited Benedict to speak.

After reading from Wolf Season, Benedict answered questions from Maurice Decaul ’18 MFA, a former Marine and poet, essayist and playwright, and from audience members. Sand Queen and Wolf Season arose from years of research with these veterans and refugees. Some of her interviewees fell silent, unable to give voice to their extraordinarily painful memories, recalls Benedict. “In those silences, the truth of their experiences lay … what they couldn’t say was the territory of fiction.”

Benedict’s novels arise from her imagination, which she calls “the most important tool [for] a novelist,” and her research exploring the inner experiences of war. Calling “fiction [her] first love,” Benedict says she has never before written as a journalist and novelist about the same material.

Inspired by Pat Barker’s World War I trilogy, Regeneration, Benedict had been solidly in the 99 percent camp, possessing “typical liberal ideas. I thought [veterans] were all blindly patriotic, not very smart and too in love with violence,” she says, though witnessing many young, idealistic and caring veterans feeling crushed by their wartime experiences was eye-opening.

That American publishers and readers have so little interest in Iraqis’ perspective of the Iraqi invasion is shameful, says Benedict.  “I think we can understand each other if we work on our imagination and read fiction… [It] will help veterans feel less isolated and make us think more responsibly about war.”

To that end, the program intends to broaden the dialogue through collaborations with area high schools, book groups, libraries and veterans’ organizations. This academic year, students at Moses Brown School and The Wheeler School – and perhaps, other Providence schools, as well – will explore the experience of war with veterans or active duty personnel and humanities experts, grounding their discussions in a chosen humanities text – a novel, poem, film clip, etc. –  and in querying military representatives about their service, wartime and/or post-deployment experiences.  This summer, Watson will host another workshop for veterans returning to area colleges and universities. Benedict is working on her next novel, which will complete her Iraq War trilogy.