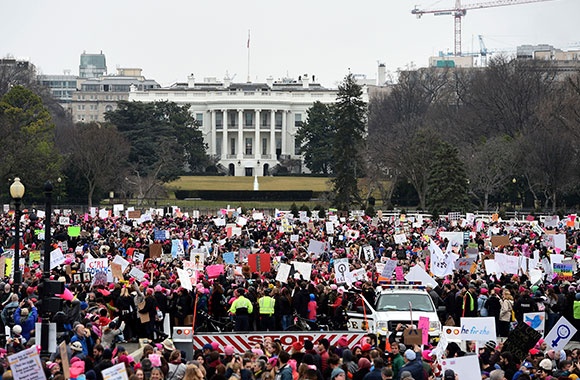 "Countries do better when women do better in those countries. That is borne out by a great deal of research. If countries have women participating in politics and in the economy, the country will be stronger, wealthier, and safer."

Investing in Women for Peace, Security, and Stability

The theme of this year’s International Women’s Day, on March 8, is #BeBoldforChange. But “boldness” and “change” could also describe a semester’s worth of events at the Watson Institute. This spring, Senior Fellow Pamela Reeves ’87 will convene men and women who advocate for gender parity in concrete and creative ways around the world for a series of talks that aim to illuminate women’s role in global security and prosperity.

The series, titled Policy & Progress: Investing in Women for Peace, Security, and Stability, is co-sponsored by the faculty-student collaborative Women Empowered. “I am unabashedly ambitious for the progress of women and girls in the world. There’s no question in my mind that by adding women we will improve our outputs in every sector,” says Reeves, an adviser to the Office of Melinda Gates on global women’s issues and former director of Secretary Hillary Clinton’s International Fund for Women and Girls.

The first event, a panel on women in the workforce and politics, will feature three experts on global gender equality, international development, and education. Cathy Russell, U.S. Ambassador-at-Large for Global Women’s Issues under President Obama, is the featured host of the panel and will moderate the discussion.

Reeves will lead the discussion for the following two talks, which will feature Kakenya Ntaiya, founder of the Kakenya Center for Excellence, an educational program for girls in rural Kenya, and Michele Sullivan, president of the Caterpillar Foundation and a recent U.S. delegate to the United Nations Commission on the Status of Women.

Issues about women are not just women’s issues, says Russell. “Countries do better when women do better in those countries. That is borne out by a great deal of research. If countries have women participating in politics and in the economy, the country will be stronger, wealthier, and safer. These are national issues that leaders need to pay attention to.”

Reeves agrees. “You can’t have a completely healthy and prosperous nation if half the population is shunted to the side. We see success when we see full participation by men and women alike.”

Reeves also brings her experience to bear in her spring semester course, Global Women’s Issues: Investing in Women as a Strategy for Sustainable Growth and Global Development. “We look at issues that disproportionately affect women and girls around the world and how approaches to their remedy lie not just in the nongovernmental world or in philanthropy, but also in the private sector and in government.” Each has a special role, she says, but none has all the competencies required to move an issue forward. “The government has a responsibility in terms of regulation, and in negotiating certain framework relationships with other countries. The private sector creates jobs, builds infrastructure, spurs growth. Civil society is people on the ground … the ones who know what the needs are in a community, what can work and what can’t. And philanthropy is a fourth pillar, that, among other things, can play a unique role in seeding risk.”

Both women believe it’s no accident that the course and the series are taking place at Brown. Says Reeves: “When I listen to my students talk to each other, it’s remarkable. They say things that are right, even if the world’s not ready to hear it yet. They’re the ones who are going to make it happen. They’re the ones who are thinking up what we haven’t yet imagined.”

Indeed, Brown is where Reeves, as a student, first started to think about these issues. Several professors inspired her. “They said, in so many words, You matter and your mind matters and your ideas matter, so say them out loud.”

For complete information about the series, visit our website.