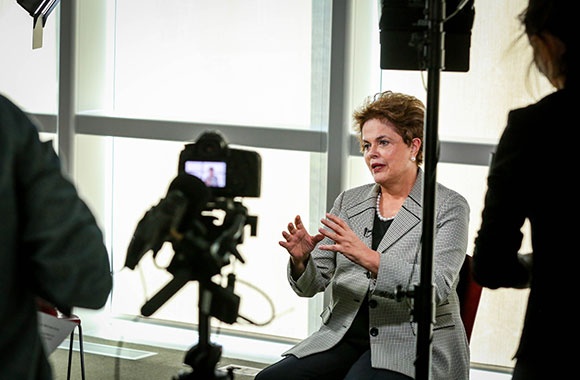 Brown Journal of World Affairs: What are your memories of April 1964 when the military came to power in Brazil?

Dilma Rousseff: The coup of 1964 was a time when Brazil as a whole was persecuted. I remember people fleeing arrest, going into exile; I recall reports of torture. My deepest feeling at the time was tremendous dismay at how democracy, which enabled the election of a popular president who had a platform based on the Basic Reforms plan [Reformas de Base], had been discarded. That dismay was enormous. We had voted for a leadership that wanted to transform Brazil and implement popular reforms and development projects. Instead, we got an unknown and unwanted military junta.

Journal: Were there any particular factors that sparked your decision to participate in the resistance? What values ​​and beliefs motivated your involvement?

Rousseff: I arrived in the world of politics at this point—the moment of the military coup, when students (I was a student) mobilized. Students wanted more participation in politics. Our initial reaction was to oppose the coup, to demand democratic freedoms like the right of assembly, right of expression, right of organization. We even started producing a series of small newspapers. I joined the resistance during this process. Joining the resistance is not something that has a precise moment—you do not know the day, the hour, the minute. There is a process in which your awareness grows, and you realize that your country runs serious risks of backsliding. There are a number of threats hanging over the people. In the case of the students, Decree Law 477 prevented them from protesting. It was said that students should study, businessmen should grow their companies, workers should work, and intellectuals should write their books in silence. The ones behind politics were the military. Resistance begins in society when young people connect with a movement. In Brazil in 1964, that moment was the resurgence of political consciousness (for us, who were young). This was a very rich moment in Brazil involving protests aimed at the military coup.