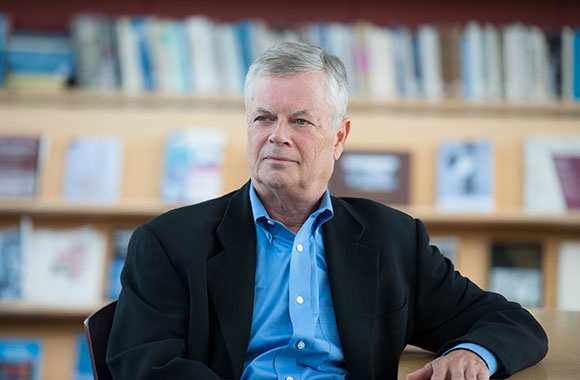 Watson Institute Senior Fellow Stephen Kinzer, author of nine books and co-author of another, talked with the Watson Institute about his newest book, The True Flag: Theodore Roosevelt, Mark Twain, and the Birth of American Empire, published by Henry Holt and Company. The True Flag highlights the “behind-the-scenes” personalities and politics related to our nation’s interventions in world affairs late in the 1890s and clarifies how they impact current foreign policy dilemmas. Excerpts of his interview are below.

Q: What motivated you to write about this period?

I am always looking for untold stories, episodes from history that were hugely important but that for one reason or another have been forgotten.  There are many books about the history of the Spanish American War and the burst of expansion around 1898, but I had never realized that the entire nation was riveted and caught up in a huge debate over whether expansion was a good idea. Every political and intellectual figure in the United States took sides, and the outcomes in the Supreme Court and Congress were very narrow.  In the history of American foreign policy, this was truly the “mother” of all debates.  Every time we debate the question of intervention, whether it’s Vietnam, Central America or Iraq, we go back to the themes that first erupted during that time.

All of my books are essentially self-designed graduate research courses into whatever subject I’m interested in…I felt like I was the first person in generations to be reading the transcripts of the 32-day Senate debate over expansion in 1899.  That was a wonderful feeling.

Q: Tell us about the book’s title? Why did these words by Carl Schurz, an avowed anti-expansionist, resonate so strongly with you?

Schurz gave a speech in Chicago, where he urged the country to raise the … “old, the true flag… the flag of human rights and of good example to all nations.” I love that quote because it asserts that our flag is not the flag of conquest. That encapsulates the message of the book.

I had never heard of Schurz before I did the research for this book.  Now I’m a huge admirer.  I’m happy to bring him back to life and introduce him to my readers.

Q: You wrote, “Americans often see only good and evil. We rush to take the side of good. This usually brings trouble.” Can you elaborate?

We have a divided soul. We feel called to make the world a better place and, despite all the evidence that many of our interventions make the world a worse place, we still think we can get it right. Our “can-do” mentality is a very positive thing, but it has a dark side. It would require a great psychological adjustment for Americans to calm their misplaced missionary impulse.

Sometimes Americans are very excited about the idea of intervening in foreign countries.  We become outraged at perceived abuses or threats to our security and we crash into other countries.  Then, as the blowback becomes clear and we realize those interventions don’t work, we calm down—until the cycle begins again.

It’s too early to know what his foreign policy will be, but President Donald Trump is the perfect embodiment of this conflict – he doesn’t want to fight foolish regime change wars yet he’s going to threaten or bomb countries that stand in our way. He proposes two opposite policies and wants them both.  That is who we, as a nation, are.

Q: You ask if America can become a learning nation, rather than a teaching nation. Tell us more?

History suggests that countries that survive over long periods of time – like China and Iran – have learned to ride the currents of history, where no single power is on top forever. We have no experience with those tides.  We’ve been taught that our power would always expand and we would always be richer than we used to be.  That has never been the case in any country or empire.

China is a rising power with a larger population than ours, a long tradition of political and cultural dominance, and soon, more wealth than the United States, This presents us with our most complex foreign policy chalenge. It’s a completely new experience for us.  We’re not geopolitically or psychologically prepared for it, and that’s worrisome.

Q: Did you have any favorites among The True Flag’s colorful characters?

I enjoyed discovering the relationship between Theodore Roosevelt and the “real” Mark Twain – vituperative and wicked in his denunciation of imperialism, with a “poisoned pen.” Schurz, as I noted earlier, gave me the book’s title, and I also came to admire former Senator George Frisbie Hoar, who exemplified the intellect and learning reflected in many senators’ speeches of that time. I’ve always been interested in Grover Cleveland, the president who refused to take Hawaii, and John Hay, a Brown University graduate, who was private secretary to President Abraham Lincoln and secretary of state to two other presidents. As a poet, great writer, philosopher, diplomat, and statesman, Hay must have been a fascinating figure.

Jane Addams and Booker T. Washington, among the leaders of the anti-imperialist movement in their day, would be disappointed by today’s political situation, I believe.

Both sides would have been shocked that a person of Trump’s background would have reached the presidency. The eruption of outrage in D.C. today over Trump’s Russia policies is delightful to see--he’s at least challenging one of the pillars of American foreign policy.  But he’s doing it in such a scatterbrained way that he gives unorthodoxy a bad name.

Q: Who do you hope will read The True Flag?

Kinzer will speak at 12 p.m. in the Joukowsky Forum on Wednesday, February 15th. Copies of his book will be available for purchase outside of the forum and at the Brown Bookstore.