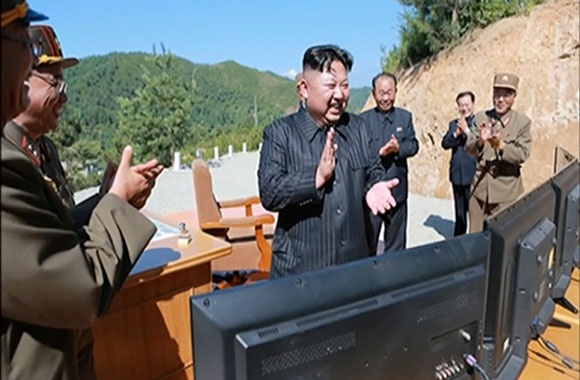 Will rising tensions between the United States and North Korea lead to nuclear war?

Nina Tannenwald, a faculty fellow and director of the International Relations Program at the Watson Institute, offered her insights on the rising tensions between U.S. President Donald Trump and North Korea’s Supreme Leader Kim Jong-un.

The lesson North Korea learned after watching the U.S. invasions of Iraq and Libya was that you had better have nuclear weapons if you don’t want the U.S. to invade and engage in regime change. North Korea has pursued nuclear weapons, in contravention of the Treaty on the Non-Proliferation of Nuclear Weapons (NPT), to which it belonged before withdrawing in 2003. The NPT obligates its signatories to pursue nuclear disarmament in good faith, yet many nations perceive the declared nuclear powers – the United States, China, Great Britain, France, and Russia – as failing to do so. By preserving nuclear weapons only for the declared powers, the NPT loses legitimacy and other nations, including North Korea, grow frustrated.

Q: Your 2007 book, The Nuclear Taboo: The United States and the Nonuse of Nuclear Weapons, Since 1945, explains the post-World War II nuclear taboo. Is it still intact today?

A: The nuclear taboo hasn’t disappeared, but it’s weakening under pressure. The taboo is one of a set of four norms of nuclear restraint: non-use (the taboo), nonproliferation, disarmament and deterrence. Several different pressures – increased geopolitical conflicts; new, high-tech, conventional weapons that could be mistaken for nuclear weapons; lowered thresholds for nuclear use; and inflammatory rhetoric from Russian President Vladimir Putin, who threatens Europe with nuclear attacks, and President Donald Trump, who disparages the NPT, suggests Japan and South Korea acquire nuclear weapons and threatens North Korea’s Supreme Leader Kim Jong-un with total destruction – have further frayed these weakening norms.

Q: How dangerous is Trump’s bombastic messaging to Kim?

A: Really dangerous. Kim will not start a war out of the blue, but he could miscalculate, as Trump’s statements heighten the risk of miscalculation. He could misinterpret our training runs as an attack, given Trump’s regime-change rhetoric. If he felt under attack, Kim could attack Seoul, South Korea with conventional weapons, which could kill 20,000 to 200,000 citizens. He could also send missiles to Japan or Guam.

We are very close to getting into a war through misunderstanding, which some analysts compare to the Cuban Missile Crisis. Then, President John F. Kennedy carefully articulated a clearly defined, broadly supported message and allowed Soviet Leader Nikita Khrushchev a face-saving exit strategy. In contrast, the Trump administration’s different messaging creates uncertainty. Do they actually want to engage in regime change? Do they want to bring Kim to the negotiating table? Do they seek some type of containment relationship? Do they really expect North Korea to give up nuclear weapons? That last expectation is wholly unrealistic; North Korea is never going to give up its nuclear weapons and we must live with that painful reality.

Q: What is Kim’s strategy?

A: First, the deterrent threat of nuclear weapons prevents invasion and regime change efforts. North Korea’s nuclear weapons, a last resort, help to equalize the playing field. Second, he intends to drive a wedge into the United States, Japan, and South Korea alliance; South Korean and Japanese conservatives could come to believe their nations need nuclear weapons, as they can’t rely on U.S. protection.

He’s getting precisely what he wants; Trump provides all the evidence he needs to support his argument to North Koreans: We need these weapons because the U.S. is going to attack us.

Q: What impact do the State Department’s widespread vacancies have on this situation?

A: It’s troublesome that no assistant secretary for East Asia is in place. I don’t know how much of the quiet, secret, back-door diplomacy, which is critically important, is actually happening now. Secretary of State Rex Tillerson is in over his head; U.N. Ambassador Nikki Haley, who often articulates a foreign policy position different from White House positions, and Secretary of Defense James Mattis fill the Secretary of State’s role.

A: Why not ignore Kim? We should publicly ignore him, but engage in containment discussions and back-channel diplomacy; in exchange, North Korea would expect some non-aggression agreement from the United States. U.N. Secretary-General [António Guterres] should convene the U.S., China, the Koreas, Japan, and Russia for discussions designed to dial back the confrontation.

If we tear up the Iran nuclear agreement, we’d have a second North Korea in Iran, and we’d lose all credibility with North Korea. If we demonstrate our unreliability with Iran, why would North Korea agree to anything with us? I have never really been worried that we might end up in a nuclear war, but I am now.