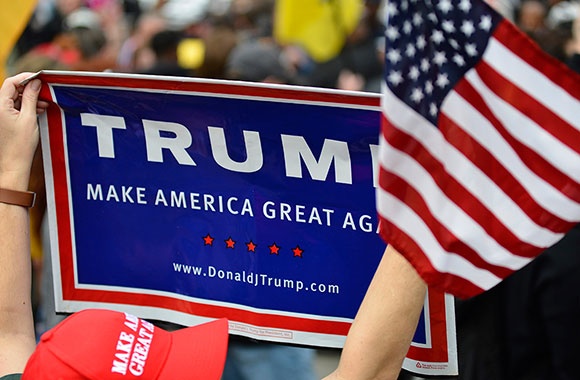 Trump Coalition Looks Past Controversies, while Opposition is Intense

PROVIDENCE, RI [Brown University] — The first in a series of polls conducted by the Taubman Center for American Politics and Policy at Brown University’s Watson Institute underscores the partisanship that marks American politics, the solidity of President Donald Trump’s base, and a broad backlash against Congressional Republicans. The poll, conducted April 5-10, was fielded by RABA Research, a bi-partisan polling firm, in collaboration with Brown University.

The poll did a deep dive into five different kinds of geographies with different recent voting patterns – including two areas that voted for both Obama and Trump. In three of the five areas, Trump’s current approval ratings suggest that many voters who supported him in the election do not approve of his job performance. For example, Trump won the four counties Taubman polled in Iowa with a range of 62.1 and 70% of the vote. Today, however, only 47% of voters in those counties rate his job performance “good” or “excellent.” However, in all four of those Iowa counties, Trump ran ahead of generic Congressional Republicans matched against generic Democrats.

“Republican candidates do not seem to be able to run away from the Trump agenda,” said Jim Morone, director for Brown’s Taubman Center. In 2016, most GOP candidates ran ahead of Trump’s performance in the general election. “Now, with Trump as president, Congressional Republicans face considerable headwinds in very different kinds of political settings.”

The poll also shows some voters souring on GOP plans to get rid of Obamacare. In the working class suburb of Kent County, RI, 49% of voters oppose repealing the Affordable Care Act, while only 36% support it. The upper middle class voters in Arapahoe County, CO (who voted for both Obama and Clinton) also oppose scrapping the ACA, while rural voters in the Midwest and the south continue to voice support for Republicans looking to repeal the ACA. In general, however, support for Trump outruns support for his policies in most policy areas. While Clinton’s America opposes efforts to defund Planned Parenthood, so does much of Trump’s — outside the South.

Support for other Trump priorities — including the building of a border wall with Mexico and a temporary travel ban placed on visitors from certain majority-Muslim countries — remains strong across four of the five areas surveyed.

“Our deep drill down into different American settings shows a fiercely divided nation,” said Morone. Strong partisan differences appear both between districts and within them. For example, in the upper middle class exurb of Chester County, PA, which voted for Romney in 2012 and Clinton in 2016, Donald Trump’s approval rating exceeds his vote count. At the same time, an extraordinary 44% of voters in that county say they have personally backed the opposition to President Trump — by writing letters, going to meetings or contributing money. “So here’s a county,” concludes Morone, “where 49% of the population says Trump is doing an excellent or good job while 44% claim to be organizing against him!”

At the same time, the poll shows no systematic evidence of collapsing support for Donald Trump despite the many controversies that have surrounded his administration. Across the very different political settings, his approval rating very roughly reflects his November vote totals.

NOTE: The poll tested voters on trade and China, funding for Planned Parenthood, opioid abuse, and attitudes both about alleged Trump ties to Russia and allegations that President Obama wiretapped Trump Tower during the campaign.

The counties studied in the Taubman Poll are generally representative of certain types of counties—meaning that they have demographic and ideological similarities to other counties around the country. Learn more about the types of counties chosen in the Background Document below:

Poll shows support for Trump, but not his policies or Congressional Republicans – News from Brown