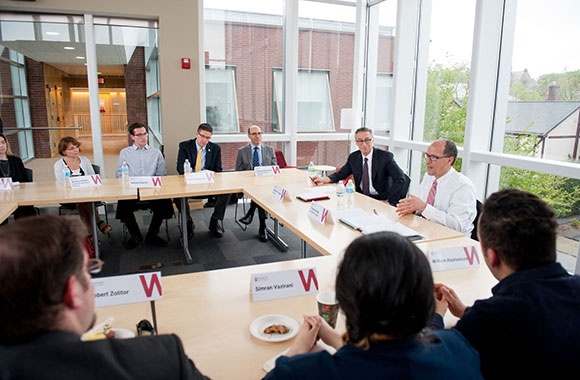 "It's a great honor to welcome Brown graduate Tom Perez to Watson this Fall. He brings vast experience in local and national politics, and will undoubtedly help all of us, students and faculty alike, apply theory and research to real world challenges."

Tom Perez '83, labor secretary under President Obama and current chair of the Democratic National Committee, has been named a senior fellow at the Watson Institute for International and Public Affairs. Throughout the year, Perez will engage with students, faculty, and visitors, sharing insight and knowledge gained from the years he served as a member of President Obama's administration, as a local organizer, and as a first-generation college student at Brown University.

Announcing Perez's appointment, Watson Institute Director Edward Steinfeld said, "It's a great honor to welcome Brown graduate Tom Perez to Watson this Fall. He brings vast experience in local and national politics, and will undoubtedly help all of us, students and faculty alike, apply theory and research to real world challenges. What an extraordinary opportunity for all of us to learn from Tom and the numerous guests he'll bring to campus from across the political spectrum."

Referring to his time as an undergraduate, Perez said, "At Brown, I appreciated the opportunity to learn from so many talented and committed professors. At the same time, I always wanted to hear the perspectives of people who were on the front lines day to day tackling critical challenges."

Perez, who knows a bit about the challenges of governing in hyper-partisan times, will lead a study group in which students will engage in open-ended discussions and free-flow give and take with leading figures in American politics. The focus will be on effective problem solving for anybody - whether liberal or conservative, Democrat or Republican -- seeking to improve the common good through better public policy outcomes.

Titled "Governance and Leadership in Challenging Times," the group will meet for an hour and a half seven times this semester. During those sessions, Perez will help students see how theory informs practice as they explore compromise, ethical issues, and conflict resolution with guest speakers "from the trenches." Speakers will include Denis McDonough, former Chief of Staff to President Obama; Gina Raimondo, Governor of Rhode Island; Michael Steele, former Chair of the Republican National Committee; Sharon Block, former member of the National Labor Relations Board; and Chris Lu, former senior aide to Senator and President Obama. Though participants will not receive course credit, there will be suggested readings, and Perez will hold informal lunches and office hours. Several public events will also take place.

Perez wants to inspire students to consider a career in public service. The son of immigrants from the Dominican Republic, Perez became a civil rights attorney, advocating for a range of progressive causes, including fair housing laws, protection from hate crimes, and access to employment. As the 26th U.S. Secretary of Labor, he fought for minimum wage and sick leave, among other workers' rights.

"Today's students at Brown will be tomorrow's leaders," Perez said. "Our goal in this study group is to expose students to leaders who have been wrestling with some of the most difficult issues confronting our nation, share lessons of success and failure, and discuss tools for future progress, as well as to think critically about contributing to the timeless journey of forming a more perfect union.

Students interested in the study group can learn more here.