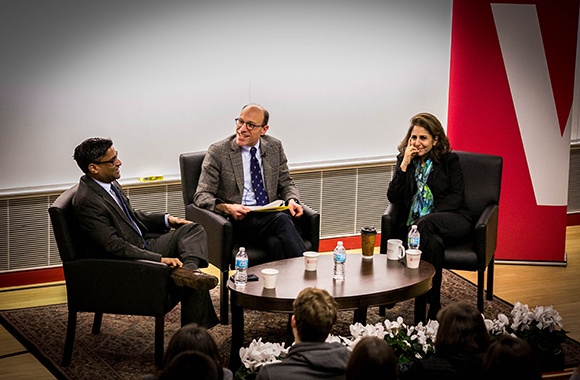 The Watson Institute hosted more than 300 events during the 2016-2017 academic year, ranging from topical policy-relevant lectures and events to scholarly conferences. Below are some of our most notable lectures, many concerning the global trends of rising illiberalism and nationalism.

Politics and Policy in the Era of Trump: A Conversation on Healthcare, Economy, National Security, and more
A conversation across party lines with Neera Tanden, president of the Center for American Progress, and Ramesh Ponnuru, senior editor for National Review magazine, as they take a closer look at the Obama legacy, the 2016 presidential election and Trump's first 100 days in office. This event culminated the #WatsonElection series.

The Future of the Republican Party and The Future of the Democratic Party
David Corn '81, political journalist, author, and the Washington bureau chief for Mother Jones, hosted panels this semester on the future of America’s two largest political parties. The panels featured a variety of political views, including those of Maria Teresa Kumar, CEO of Voto Latino, Stephanie Schriock, president of EMILY's List, and political consultant John Weaver. These events were part of a larger series providing post-election analysis and a comparative look at global political trends.

Humanitarianism and Art: The Use of Comics and Animation in Human Rights Advocacy
Since 2012, Dr. Benjamin Dix, founder of the award-winning nonprofit PositiveNegatives and Senior Fellow at SOAS, University of London, has been producing comics and animation to shed light on humanitarian issues such as political conflict, forced migration and refugee asylum. In this talk, he discussed how he combines his ethnographic research as an anthropologist and photographer, in collaboration with artists, to adapt personal testimonies into art, advocacy and educational materials.

Resurgent Russia in the Time of Trump
National Public Radio correspondent Corey Flintoff spent four years as NPR's bureau chief in Moscow. He was joined on stage by Brown faculty—Jonathan Readey of the English Department, Linda Cook of Political Science/Slavic Studies, and James Morone of the Taubman Center for American Politics and Policy—for a conversation about reporting on Putin's Russia and the evolving relationship between Russia and the U.S.

The Challenges for Democracy in Brazil
Dilma Rousseff is an economist and politician who was the 36th President of Brazil from 2011 until 2016. She is the first woman to have held the Brazilian presidency. Previously she served as the Minister of Energy and then as Chief of Staff to President Luiz Inácio Lula da Silva, who held office from 2003-2010.

The Creation of the Palestinian Refugee Problem, 1947-1949
Benny Morris spoke about the preconditions for the creation of the Palestinian refugee crisis; its causes; Zionist and Arab policies relating to the issue; the stages in the emergence of the problem; and its short- and long-term consequences. Morris, a former journalist at The Jerusalem Post and a professor of history at Ben-Gurion University, has been a visiting professor of Middle East history at Georgetown University since 2015.

India ─ Pakistan: Can they come back from the brink?
More than any other Indian journalist, Barkha Dutt has reported on tensions between India and Pakistan from the ground—from the Kashmir valley and the international border—and demonstrated the kind of knowledge rarely seen in the coverage of Kashmir and the Indo-Pak border. She presented her perspective on the conflict earlier this year.

After Fidel: A Conversation About What is Next for Cuba and the Region
A panel discussion on Cuba’s future, held 10 days after Fidel Castro’s death. CLACS Director Jessaca Leinaweaver moderated a panel of Brown faculty composed of Anthony Bogues, Patsy Lewis, Brian Meeks, and Daniel Rodriguez.