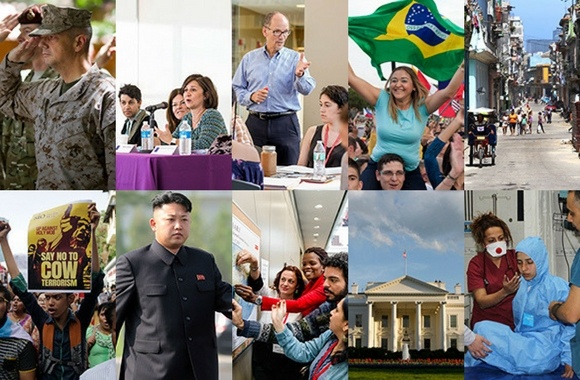 Whether you missed them the first time or want to revisit them now, we countdown our most read stories this year.

10. Violence in India, Modi's Illiberalism, and Donald Trump: Ashutosh Varshney, director of the Center for Contemporary South Asia, weighed in on lynchings in India and the populist philosophies of Prime Minister Narendra Modi and President Donald Trump.

7. Warrior Knowledge: The project "Grand Sentiments in 'Small' Wars: Suffering and Fellow-Feeling across the Civil-Military Divide" was awarded a National Endowment for the Humanities grant, allowing community-area veterans and civilians to collaborate in an effort to seek deeper understanding of the experience of war.

4.  Former U.S. Secretary of Labor to Join Brown's Policy and International Affairs Institute: Former U.S. Secretary of Labor and current chair of the Democratic National Committee, Tom Perez '83, joined the Watson Institute as a senior fellow. Throughout the year, he met with students, faculty, and visitors to share insight and advice from his time in politics and at Brown University.

3. Three Points to Remember in Response to Chemical Attacks in Syria: Postdoctoral Fellow Narges Bajoghli shares her thoughts on the chemical attacks that occurred in Idlib Province, Syria in April 2017.

2. Big Deal: Brown is Top-Ranked for Brazilian Studies: Professor James N. Green and the Brazil Initiative are ranked among the top five best programs and leading academics in the field of Brazilian Studies in North America, according to a survey across the United States and Canada.

1. Will Rising Tensions Between the United States and North Korea Lead to Nuclear War?: Faculty Fellow and Director of the International Relations Program, Nina Tannenwald, offered her insights on the rising tensions between President Donald Trump and North Korea's Supreme Leader Kim Jong-un.