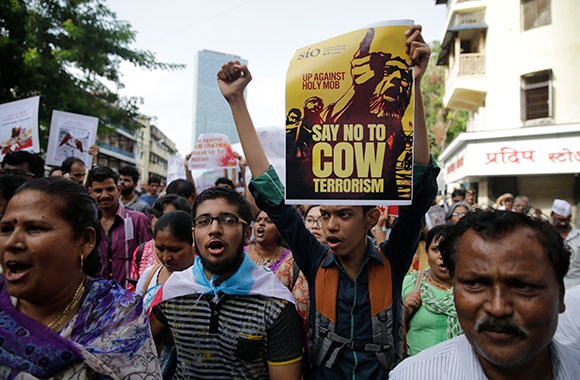 Ashutosh Varshney, a political science professor and director of the Center for Contemporary South Asia at the Watson Institute, offered his insights on lynchings in India and the populist philosophies of Prime Minister Narendra Modi and President Donald Trump.

Q: What’s the rationale behind the Muslim lynchings in India, and when did they begin?

A: Before Prime Minister Narendra Modi was elected in May 2014, riots and pogroms marked India’s terrible history of Hindu-Muslim violence.  Lynchings that occurred were occasional, and were triggered by anger related to hit-and-run traffic accidents or romances between lower-caste men and upper-caste women.

The current lynchings, which promote cow protection and oppose beef consumption, including shutting down slaughterhouses, primarily target Muslims and, to a lesser degree, Dalits (India’s lowest caste).  A clear, if implicit, connection is emerging between such acts of violence – mostly in the north and west of India – and state support.

Modi has condemned such lynchings, though not vehemently. More worrisome, however, is that Modi appointed politicians, who promote cow protection, or are known for anti-Muslim fervor, to some of the most important government positions. One of these, Yogi Adityanath, is chief minister of Uttar Pradesh, India’s most populous state.  Few politicians illegally espousing cow protection practices, or inciting violence, have been condemned by Modi.

I’ve written extensively against Modi’s choice of Adityanath, known for opposing beef consumption and Hindu-Muslim romances, particularly involving Muslim men and Hindu women. Before being elected, Adityanath had also established a vigilante force – a private army – to police these actions.  That army has not been disbanded since his rise to the highest office of India’s biggest state.  Indeed, it is gaining greater strength.

A: In its documents, the RSS, the fountainhead of Modi’s Bharatiya Janata Party (the BJP), clearly delineates its Hindu nationalist argument: namely, Hindus are owners of the Indian nation and Muslims are disloyal to India.  This is in direct violation of India’s constitution, which holds that all languages, all castes, all religions, all tribal communities jointly own the nation.

Although a recent Supreme Court ruling upholds a diverse array of privacy rights for Indian citizens, Modi has fostered an illiberal environment.  Attacks on free speech are rampant, and minorities, government critics and ideological adversaries are at risk.  Vigilantes have even killed some writers.

Q: What similarities and differences do you see between U.S. President Donald Trump and Modi?

A: They are populists who represent majoritarian viewpoints and who seek a majoritarian identity for their respective nations. After Charlottesville, Virginia, Trump can’t hide his white nationalist conception of America.  And Modi envisions a Hindu nationalist India.

Both have targeted “adversaries” – for Trump, it’s the Hispanic and African American communities; for Modi, it’s the Muslim community.  Both are against press freedom. However, the Indian Supreme Court and U.S. federal courts have thus far exerted considerable independence from Modi and Trump, respectively.

In contrast to the United States, the press in India is becoming increasingly pro-Modi and Indian intelligence offices have in any case been government’s handmaiden. Although the India’s central bank, called the Reserve Bank of India, is expected to maintain considerable independence from the elected government, it did virtually nothing in response to Modi’s demonetization initiative that, overnight, withdrew 86 percent of the nation’s currency. Such an attack on monetary policy is nearly inconceivable in the United States today.

Rebellions brought both men to power: Trump toppled the GOP establishment during the primaries and Modi knocked down the BJP establishment as well as the Nehru- Gandhi dynasty.  That an outsider of very modest background – like Modi – became prime minister is, at one level, a celebration of Indian democracy, but his populist beliefs at the same time reject democratic constitutional principles.  For him, democracy seems to be equal to populism.

Q: Which leader – Modi or Trump – do you find more alarming?

A: At this point, Modi. India’s oversight institutions, such as the press, the courts and federal intelligence agencies, are not as strong as those in the United States. In India, intelligence agencies are under complete government control. I think the institutional health of American democracy is stronger; I can’t be so confident about India’s institutional health, perhaps because India has only 70 years of independence. One feels more confident that Trump might not politically survive. But Modi, most probably, will win the 2019 election; he is the most popular politician in India.

Whether the lynchings cease will depend entirely on the strength of criticism against them, both internationally and from opposition groups, civil society, and intellectuals within India.

Ashutosh Varshney is the Sol Goldman Professor of International Studies and the Social Sciences and director of the Center for Contemporary South Asia at Brown University’s Watson Institute. Varshney is author of several books on India, including Battles Half Won: India’s improbable Democracy.  His guest columns have appeared in the Financial Times, and he is a contributing editor for the Indian Express.  He served on United Nations Secretary General Kofi Annan’s Task Force on Millennium Development Goals and as an adviser to the World Bank and the United Nations Development Program.