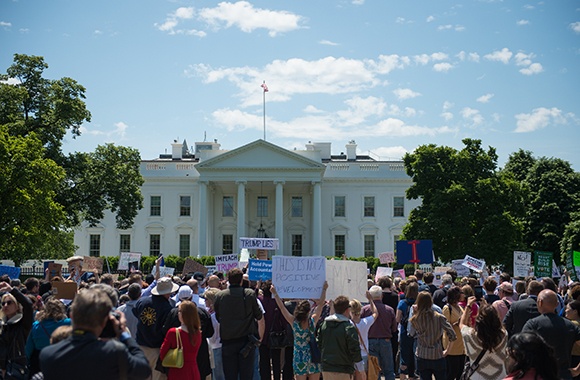 "Without the global perspective, people might view their nation’s issues as unique...but economies, ideas, and political movements are global."

Understanding the rise of nationalism in hot spots around the world

We must compare illiberalism across countries, systems, and times, says Watson Institute Director Edward Steinfeld. “I once [assumed] that the post-World War II status of the countries of North America and the European Union were and will forever be liberal democracies, [but] that’s not the politics we’re in now.”

Comparing rapid urbanization in contemporary China, India, and the United States, for example, is an outgrowth of Watson’s regionally structured institutes; comparative analyses, says Steinfeld, create new ways of framing the world. So does Watson’s work on demographic changes that, coupled with revolutionary technological changes, create masses of disaffected peoples.

Without the global perspective, people might view their nation’s issues as unique, says Green, but economies, ideas, and political movements are global.

Green agrees. Students’ learning here complements their courses. “Given the diversity of scholars [at Watson] … students can acquire a comprehensive understanding of the world that is essential for anyone living in a country that has such a global reach."

“Given the diversity of scholars [at Watson] … students can acquire a comprehensive understanding of the world that is essential for anyone living in a country that has such a global reach."

That many populist candidates from the United States, France, and India, for example, don’t seem to represent a traditional perspective suggests regime change, Steinfeld says. “There are positive aspirational possibilities in some [non-liberal governments], but others are all about humiliation, anger, and retribution. Those are usually associated with xenophobia … we see aspects of that in the United States and Europe.”

Norm Eisen (in an interview conducted late last month) characterizes the United States’ current national populism as an ideology of hate. Divisive rhetoric against migrants and Muslims is morally offensive, he says, and harms our nation’s low-wage migrant workers, universities, research initiatives, and efforts to gain international support against ISIS.

Nevertheless, Eisen is cautiously optimistic that “checks and balances are working. That’s the genius of our Founding Fathers,” and heartened by energetic pushback – through litigation, judicial decisions, and protests – against several Trump proposals.

Eisen would counsel our concerned allies, “Be patient … It’s not that easy to undo all of the might and moral majesty of the United States ….”

Watson’s commitment to world-class research and teaching requires free, open, and reasoned debate about problems that we all want to solve, says Steinfeld. “We …  can have different perspectives and learn in the process.”