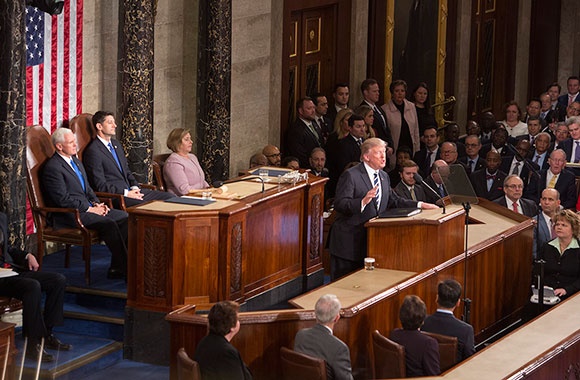 "The trick of nationalism is to distract us from divisions of power and privilege and to declare that we all bleed red. That may be true, but it’s not at all clear that we all define truth (and liberty and justice, the centerpiece of Trump’s nation) in the same way. In that, nationalism is not at all so simple."

On issues of drugs and border security, the president's comments revealed that he has yet to recover from a severe case of historical amnesia and an allergic reaction to empirical evidence.

He asserted that we've left our borders "wide open, for anyone to cross--and for drugs to pour in at a now unprecedented rate." Not only is the U.S.-Mexico border not "wide open," it is now one of the most heavily policed borders in the world: the size of the Border Patrol doubled in the ’90s and doubled again in the first decade of this century. And there is no evidence that illicit drug imports have reached "unprecedented levels;" to make such a false assertion conveniently glosses over the fact that the single most important cause of the nation's current drug epidemic is abuse of prescription opioids, with many users turning to heroin only after first becoming hooked on painkillers. Meanwhile, Mexican marijuana exporters have faced growing competition from domestic growers who have made the U.S. one of the largest pot producers in the world.

The president again promised to soon "begin construction of a great wall along our southern border," and that "it will be a very effective weapon against drugs and crime." Perhaps the president is simply unaware that drugs such as cocaine and heroin mostly cross the southern border through official ports of entry--bypassing the substantial border barriers that already exist or any new ones constructed. There has also been a proliferation of clandestine tunnels along the border, and these can be expected to flourish in response to any sort of wall building project. This would certainly seem to be a good time to invest in excavation and tunnel-digging equipment in Mexico, not to mention ladders. At least the president did not repeat his absurd claim that Mexico will somehow pay for his expensive wall, though he could of course try to keep the price tag down by hiring migrant workers to build it.

Where were Iran and Russia?

The most remarkable foreign policy aspect of President Trump’s speech was what he left unsaid. His only promises were two that he has repeatedly made: to build a “beautiful” wall along the US-Mexico border, and to press NATO allies to pay more for European security—adding oddly that this is already happening, and “the money is pouring in.” Then, as required by protocol, he saluted the “unbreakable” American tie to Israel, called ISIS a “vile enemy,” and vowed to seek higher defense spending. Beyond that, he did nothing to resolve the great foreign policy questions that swirl around his administration.

What about Iran? Aside from a brief mention of sanctions, Trump made no new threats against the Islamic Republic. He did not threaten to withdraw from the nuclear accord that was his predecessor’s greatest foreign policy achievement. There was much applause to be had by delivering an anti-Iran tirade, but it never came. On the contrary, Trump lamented what he said were $6 trillion the US has spent on Middle East wars. If we could expect consistency from him, this might be a sign that he is not going to plunge into the confrontation with Iran for which some in Washington are salivating.

Most interesting, though perhaps not surprising, was that Trump never pronounced the word “Russia.” He chose not to face the furor that has erupted over his desire to improve relations with Russia, and his administration’s murky relationship with Russian leaders. Speeches like these are often full of demagoguery, and Trump offered plenty of it. Yet he resisted the warmongering that plays so well in Congress. That offers a glimmer of hope that Trump might have meant what he said when he insisted, “We want harmony and stability, not war and conflict.”

Michael Kennedy
Professor of Sociology and International and Public Affairs

Nationalism has many bad connotations, but at its root it is commonplace. Its ideology is simple: every nation deserves its own state, which in turn, enables that nation to fulfill its destiny while building on its history. And so President Trump expressed American nationalism by celebrating greatness, pride, and optimism as the key ingredients of the enduring American spirit which, in turn, enables the USA to lead the world.

Every nation may be special but the structure into which every nation pours its soul is relatively consistent. Those structures are, however, also always contradictory. The articulation of any nation has clear alternatives built within it whose mobilizations can ensure legitimacy or move its crisis. Both were present in Trump’s speech.

When mobilizing nationalism, nearly every nation recognizes soldiers whose ultimate sacrifices seal the sanctity of the national bond. But moving a nation into unjust wars, or into bungled missions, can delegitimate a nation’s leadership. Ryan Owens’ martyrdom deserves mourning, but for just that reason, his father’s challenge to Trump is all the more powerful.

Nationalism needs enemies to flourish, but how one names them is itself a choice. Bad Dudes might be good, for nobody I know belongs to that religion. However, Trump also has embraced a position controversial among those with expertise and experience in international affairs: to name the enemy “Radical Islamic Terrorism”. For the same reasons many Christians resent association with White Supremacists who terrorize communities of color, substantial parts of the Muslim world, and our own Muslim citizens and residents and their allies, find the problem to be in terror, not religion. But if you believe that the world approaches a clash between Christianity and Islam, the name is perfect. It mobilizes religious division magnificently.

Where President Trump departs most from previous administrations is in his economic nationalism. It’s not too different from how I grew up in Bethlehem, Pennsylvania, actually. Once the home of now-bankrupt Bethlehem Steel, no one working in the industry, whatever his class, could drive a foreign car. “Buy American” defined livelihoods. Economic nationalism is not intrinsically wrong, but it’s a lot more complex to manage than even health care reform. And can be divisive.

While we all might benefit from rebuilding America’s crumbling infrastructure, other projects are not publicly virtuous: the President’s promise to require American-made steel in building the pipelines that Native Americans, environmental activists, and others hoped they had defeated moves conflict among Americans. That conflict may serve Trump’s nationalism, however.

Beneath every nationalism, then, is a choice about which nation is being celebrated. The trick of nationalism is to distract us from divisions of power and privilege and to declare that we all bleed red. That may be true, but it’s not at all clear that we all define truth (and liberty and justice, the centerpiece of Trump’s nation) in the same way. In that, nationalism is not at all so simple.