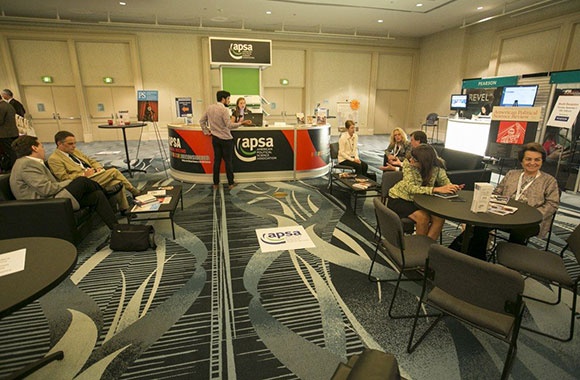 Little wonder, then, that 19 professors and 6 graduate students from Brown University’s political science department, including Provost Rick Locke and a number of faculty jointly appointed with the Watson Institute, will participate as panel discussants or paper presenters at the conference, which annually draws some 5,000 to 7,500 individuals, primarily political science professors.

“Faculty members selected to be panel discussants or presenters at APSA and other similar conferences,” says Political Science Department Chair and Watson Faculty Fellow Wendy Schiller, “are regarded as productive scholars.” Political Science now has 31 faculty members, many of whom have vibrant research agendas, says Schiller.

Chairing APSA’s Legislative Studies section, Schiller is a discussant on two panels: Examining Models of Representation in the U.S. Congress and Gender, Electoral Structure and Decision-Making. She and Kaitlin Sidorsky, who earned her Ph.D. from Brown and is now an assistant professor, politics, at Coastal Carolina University in Myrtle Beach, South Carolina, will present their paper analyzing markedly different state domestic violence laws as part of the Gender Inequality and Public Policy panel. “It’s not the world’s cheeriest subject. Women are rendered unequal to one another in terms of their human safety simply because we have states with jurisdiction over so much of our lives,” Schiller explains. “This is true across the board – true of education, tax policy, divorce, child custody, and so on.”

Patashnik, Yale University’s Alan S. Gerber, and Conor M. Dowling, of the University of Mississippi, will receive APSA’s Don K. Price book award for the best book on science, technology, and politics for Unhealthy Politics: The Battle over Evidence-Based Medicine, published in 2017 by Princeton University Press. “We really rolled up our sleeves to understand how the U.S. health care system works and why so many common treatments are not grounded in sound science,” says Patashnik.

The outgoing chair of APSA’s Public Policy section, Patashnik and co-author Jonathan Oberlander, of the University of North Carolina at Chapel Hill, will present their paper analyzing conservative reactions to the Affordable Care Act as part of the Health Reform in the Trump Era: Exploring the ACA’s Near Death Experience panel. This paper and others by leading health policy researchers were presented at a recent conference at Watson, “Health Policy after the 2016 Election,” and published by Duke University Press in August 2018 in a special issue of Journal of Health Politics, Policy and Law. Patashnik edits the journal.

Watson faculty member and political scientist Peter Andreas, a discussant on Organized Crime, Governance, and Violence, points out that Angelica Duran-Martinez, who earned her Ph.D. from Brown and is now an assistant professor of political science at the University of Massachusetts, organized the panel. Interest in Latin American organized crime, governance, and violence is now growing, says Andreas, who will also present his paper during the Historical Perspectives on War and Peace panel. The paper is adapted from his current book project under contract with Oxford University Press, Killer High: A History of War in Six Drugs, which traces the relationship between various drugs and armed conflicts across time and place, from long ago to the present, Andreas says. “It brings a historical perspective into a contemporary debate that tends to bracket history and gloss over it.”

Rose McDermott will present her paper, which she co-authored with her long-time collaborator, Peter Hatemi, of Penn State University, and Charles Crabtree, a graduate student at the University of Michigan, at the panel, A Comparative Perspective on Methods and Ethics in Conflict Studies. The paper, which is under review for a special issue of Comparative Political Studies, examines different methodological and ethical concerns about field experimentations, says McDermott.

McDermott, a political scientist and member of the Watson faculty, has spent 15 years studying sex differences in aggression, including as a principal investigator for the WomanStats Project (www.womanstats.org), the world’s most comprehensive database of facts related to women and children. “I have been working on gender issues my whole career,” says McDermott, who will participate in a roundtable titled Enough! Ending Sexual Harassment in Political Science, organized in response to the #MeToo movement.

While McDermott doesn’t know how the panel discussion will evolve, she expressed hope that people will talk about the policies they want to see implemented. “I do think it’s important to open up the conversations. There have been enough of these cases of sexual harassment, including some reported in The Chronicle of Higher Education, that policies should begin to change. I hope the conversation will move forward on the panel.”