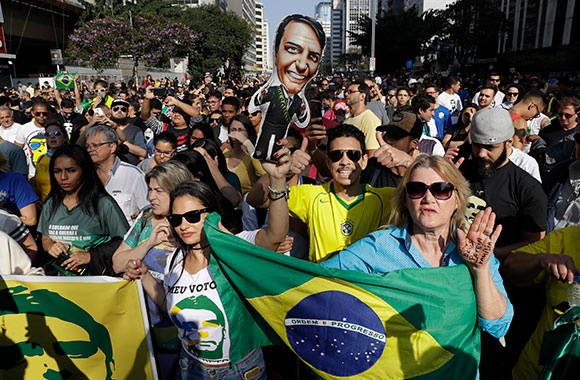 Brazil Elections: Who's in Play and What’s at Stake

This October, Brazilians will head to the polls to elect a new president. With the economy in a recession and many elected officials charged with corruption, the country is increasingly divided by a left-right split. Historian and Brazil expert James N. Green gives us the lay of the land as the first round, scheduled for October 7, approaches.

WI: Who are the principle candidates for president in this election?

JG: Historically there have been three blocks of voters and political parties: the left, the center, and the right. What's new is that on the hard right, a person named Jair Bolsonaro, a former captain in the Brazilian army, has emerged as a serious candidate representing the Social Liberal Party. Currently polls say he has about 28 percent of vote intentions. That's partially because the candidate of the Workers’ Party, Fernando Haddad, was only officially announced recently, after former President Luiz Inácio Lula da Silva, in jail facing corruption charges, withdrew from the race. The other main candidate on the left is Ciro Gomes, the Democratic Labor Party candidate, a former governor of the northeastern state of Ceará and Minister of National Integration under Lula. Over the next two weeks, people will see which of the two will become the front leading candidate on the left.

WI: How do you explain the rise in Bolsonaro’s popularity?

JG: Well, it jumped after he was stabbed on September 7 in what may have been an assassination attempt. But even before that, he was popular among some people as the law-and-order candidate. He defends Brazil’s military dictatorship [1964-1985] and has said that if he were to come to power, they'd have to kill about 30,000 people the military didn't already kill, including former President Fernando Cardozo. He is relying on the anxiety of the middle classes about public security. Drug trafficking has created significant amounts of urban violence. This is exacerbated by the economic crisis and high unemployment. He also represents the international backlash against the changes of the ’60s and ’70s – women's rights, LGBT rights, the shifts in the status of African Brazilians through the implementation of affirmative action programs.

WI: Is a comparison to Trump too easy?

JG: In a lot of ways they are very similar. They both represent the worldwide reactionary phase of law-and-order, relying on people's fears about change to build a base of support. I think a better comparison for Bolsonaro is with Marine Le Pen. Like in France in 2017, a standard core of Brazil’s population is consolidating around a right-wing ideology which is linked to the religious Right. The question might be whether Boslonaro can get to the second round of elections [on October 28], but cannot get beyond that because it provokes a united front among other parties and voters against his policies.

WI: So it’s possible that anxieties about crime and violence and perhaps racist and homophobic views could lead people to vote for Bolsonaro, who has said he’s for military rule?

JG: There is some nostalgia for that time, for this notion that things were clean, there was order, the economy was going well, there was no corruption… It’s inaccurate but that's the perception.

WI: What about the recession?

JG: You can make the argument that the recession started under Dilma and therefore she's responsible. However, the people who voted for her impeachment, arguing she caused the recession, haven't fixed it in the last two years. This is why the left has the possibility of coming back to power. That said, if the left does come back to power, whether it's Fernando Haddad or Ciro Gomes, those political parties cannot form on their own a majority in the Congress. There's no way they can build a majority so they're going have to build a coalition. This means that whichever government comes to power, it will be facing the ongoing economic crisis and political instability, with the military in the wings.

WI: What outcome do you think other Latin American countries hope for?

JG: Right now there is an alarming shift to the right in Latin America, as in rest of the world. I think the conservative governments of Latin America look to Bolsonaro as a kind of next of kin. But I think if the left wins, it could represent the beginning of a new pink tide. The crisis we're facing in this country is happening all over the world, and it's happening in Brazil. Countries are polarized, people are very angry, and the question is whether there'll be a wave that will bring the left back to power or not.