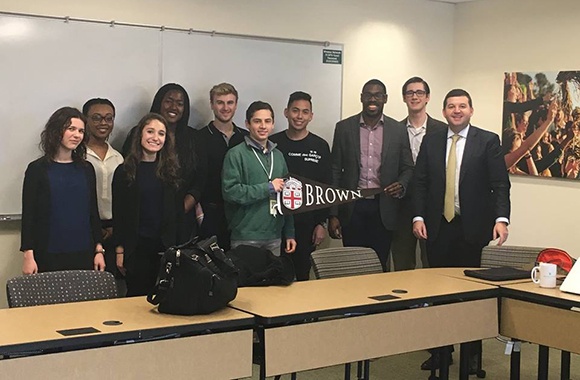 The Swearer Center at Brown University in collaboration with the Watson Institute for International and Public Affairs is pleased to announce the newest cohort of the Brown in Washington fellowship program participants. The selection of these students from a variety of backgrounds and majors, contribute to the missions of both the Swearer Center and the Watson Institute, while providing practical experience in the public policy sphere.

The program offers students a semester in Washington, D.C., interning with top public and nonprofit sector agencies, such as The Brookings Institution, Democratic National Committee (DNC), Executive Office of the Mayor, and the Office of Senator Elizabeth Warren. Complimentary coursework with Brown University faculty provide students with the course credits to stay on track. Meetings with distinguished scholars, alumni, and practitioners along with visits to government agencies and organizations, including the US Department of State, the UN Foundation, and the National Museum of African American History and Culture, are also a part of their experience in D.C.

The Swearer Center is currently accepting applications for the Fall 2018 semester! For more information about the program and to apply, visit swearer.brown.edu/biw. The application deadline is March 22.

Yannick Alphonso-Gibbs is a senior concentrating in Public Policy. Born and raised in the Bay Area of California, he is passionate about voting rights, ensuring that every American can fully participate in the political process. This past summer he worked in Massachusetts, a state that just recently granted residents the option to vote early, on this very issue. Throughout this experience, he researched and reported the results of the Early Voting program, and he learned a great deal about the Massachusetts legislature which inspired his interest in state and local government. With a passion for technology and entrepreneurship, he is excited to apply his skills to the work he does in Washington, DC. Yannick is interning at the Executive Office of the Mayor: My Brother’s Keeper Initiative.

Gregory Davis is a junior concentrating in Materials Engineering. In addition to engineering, he is interested in international law, entrepreneurship and computer science. Gregory is passionate about finding ways for business, science and public policy to work together to solve both local and global problems. Driven by the principles of liberty, justice and opportunity, he seeks to address climate change, human rights, and economic inequality. He grew up in Southern California and is a former member of the Human Rights Watch-Student Task Force, which works to educate and energize activism in high schoolers for human rights issues. Gregory enjoys learning more about science, history and contemporary issues through literature and journalism in mediums ranging from biographies to podcasts. Gregory is an intern at the Executive Office of the Mayor: My Brother’s Keeper Initiative.

Jordanna Dulaney is a sophomore concentrating in Public Policy. Previously, she interned at the US Embassy in Moscow and the US Embassy in Kyiv with a focus on the conflict in eastern Ukraine and evaluated Russian foreign policy planning. She’s also worked as a healthcare policy researcher for a gubernatorial candidate in her home state of Minnesota. At Brown, Jordanna is an associate editor with the Brown Journal of World Affairs, as well as a member of the East Asian Studies Department Undergraduate Group. She is interested in how historical narratives influence current policies both domestically and abroad. Jordanna is interning at The Brookings Institute - Center of the United States and Europe.

Michael Fuller is a junior concentrating in Public Policy, with a focus on American welfare policy. Originally from Colorado, he has worked in employment law as a fellow for the 2016 Clinton campaign, and has conducted research on legislative coalitions in the Rhode Island State House. At Brown, he is a campus leader for the Petey Greene Program which brings student tutors and meaningful education to prison classrooms across the East Coast. Michael is passionate about creating a more democratic nation through re-enfranchisement, unionization, and campaign finance reform. A member of the Democratic Socialists of America, he is excited and honored to continue advocating for the humanity and rights of incarcerated persons during his semester in Washington, D.C. Michael is interning at the Justice Policy Institute.

Christian Rome Lansang, a junior concentrating in Science & Society with a focus on normative and quantitative decision-making, is interested in the intersections of law, technology, and race. He hopes to attend law school, and critically examine and reform race-related disparities that exist in the context of race and class in the status quo. Currently, he works with Professor Jeffrey Poland researching ethical issues related to the rise of Big Data such as rights to privacy, informed consent, and racism embedded in faulty algorithmic assumptions. Looking forward to furthering this research as well as investigating the rising world of cryptocurrencies, Christian is an intern at the Center for Technology Innovation at the Brookings Institution.

Catherine Nacier, a student in the Program in Liberal Media Education (PLME), is a junior concentrating in Anthropology and interested in increasing diversity in high powered fields and reforming marijuana policies. This past summer, she was a Client Relations intern for GEX Management where she helped small businesses and non-profits, particularly those run by owners from underrepresented backgrounds, grow their organizations. At Brown, Catherine is part of the New Scientist Collective where she mentors underclassmen of color pursuing STEM careers. A member of the Student Marijuana Alliance for Research and Transparency (SMART), she intends to become a physician and apply her knowledge about the benefits of marijuana to the medical field. Catherine will be interning at NORML.

Phesheya Nxumalo is a junior concentrating in International Relations with a regional focus in the Middle East. Her interests lie in issues relating to social justice, human and women’s rights, and political and foreign affairs. Over the summer, Phesheya interned at the Rhode Island Coalition Against Domestic Violence, where she researched victim advocate privilege in surrounding New England states and Rhode Island. A volunteer at local women’s shelters and a Women’s Peer Counselor, she’s active in student organizations on campus like the African Students Association, Black Student Union, and is a tutor for the Brown Refugee Youth Tutoring Enrichment Program (BRYTE). As a Canadian citizen, Phesheya is excited to be exploring the field of foreign and defense policy at her internship at the Embassy of Canada to the United States.

Timothy Peltier is a junior concentrating in Political Science with policy interests that include education and labor. He is a research assistant at the Taubman Center for American Politics and Policy, working on a study of the Common Core Curriculum. Previously, Tim interned on Capitol Hill with Congressman Jim McGovern of Massachusetts. He is a member of the Brown Democrats, a media associate with Brown Political Review, and has volunteered on campaigns, including Brown Students for Hillary and Aaron Regunberg for Lieutenant Governor of Rhode Island. During his semester in DC, Tim hopes to learn more about student loan relief and financial support and protections for working and middle-class families. He is interning at the Office of Senator Elizabeth Warren.

Joelle Sherman is a junior concentrating in political science with a focus on American politics. She is interested in political processes and public policy as opportunities for community empowerment.She is particularly passionate about advancing voting rights and equitable representation in government. Joelle has worked to recruit, train, and elect Democratic women as a fundraising and development intern at Emerge Massachusetts. She worked on Hillary Clinton’s 2016 presidential campaign as an organizing fellow, finance intern, and co-president of Brown Students for Hillary. At Brown, Joelle serves on the Title IX committee, is a member of the Brown Political Review media team, and volunteers in Providence high schools with the Sexual Health Advocacy Through Peer Education (SHAPE) program. Joelle is in intern at the Democratic National Committee.