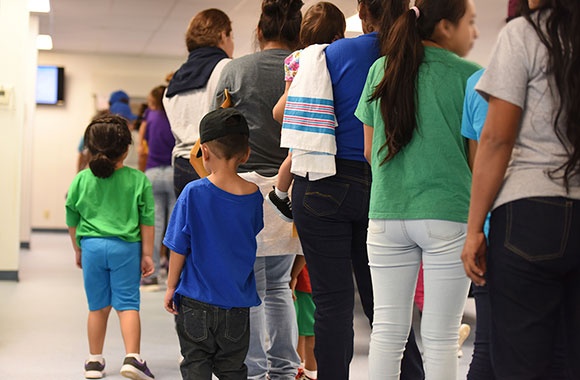 “Every time you came out of an interview room, there were still 50 or 60 women waiting. There was this sense that you have to just keep moving because it's a 12-hour day, but it's still not going to be enough.”

Interested in learning more about this topic? Friday 1/25 at 12PM, join Watson for "Working with Asylum Seekers in Dilley, Texas."

Sarah Osten ’00 graduated with a degree in Latin American and Caribbean Studies long before Kate Goldman began working for Brown’s center of the same name. But this year, their paths intersected – not on campus, but in Dilley, Texas. Both had signed up to volunteer as Spanish-language interpreters assisting lawyers who are helping immigrants—most of whom are fleeing extreme violence in their home countries and seeking asylum in the United States—held at the South Texas Family Residential Center there.

The Dilley Pro Bono Project (DPBP) is run by the Immigration Justice Campaign, a nationwide initiative that aims to ensure due process for detained immigrants by providing free legal counsel. Whether they’re lawyers or interpreters, volunteers sign up for week-long stints and receive extensive preparation before meeting with detainees, including online videos, conference calls, and a four-hour training session the first night of arrival.

“The first workshop that Spanish speakers do is about the welcome. We start by saying, ‘Welcome to the United States.’ A lot of them told us that's the first time anyone had said that to them, even though they'd been in the United States for a few weeks. The other thing that we say right off the bat is that we don't work for the government and that the information that they share with us is confidential. I think that made them feel a lot more comfortable talking with us,” Goldman says.

Because most of the women in the center have endured many forms of violence, including domestic abuse and rape, one of the training videos deals with secondary trauma, which results from exposure to others’ traumatic experiences. Osten, an assistant professor of history at the University of Vermont, says the training was helpful, but it did not prepare her emotionally.

“I am a historian of modern Latin America and have read extensively about Central America and the historical roots of the ongoing violence there. I also teach about Central America, and drug trafficking, and gangs. I thought I understood it all pretty well,” she says. “But what I learned almost immediately from the women in detention was that I had absolutely no idea how bad the situation really is for everyday people in places like El Salvador, Honduras and Guatemala. ... Many were single mothers trying to make enough money to support themselves and their kids, and gangs demanded regular payments, indefinitely, of money they didn’t have, and threatened to kill them and/or their children if they didn’t pay it.”

“I wasn't prepared for the little kids. These are moms with babies in their arms. I'm a mom, so that was really hard,” Goldman says, adding that she found the numbers of people daunting as well. “Every time you came out of an interview room, there were still 50 or 60 women waiting. There was this sense that you have to just keep moving because it's a 12-hour day, but it's still not going to be enough.”

Most of the volunteers’ work entailed preparing detainees for their Credible and Reasonable Fear Interview, during which an asylum officer determines whether they have real reason to fear persecution or torture if returned to their home country. “So many people had experienced horrific things that were perfectly good reasons to flee, but not all were legally relevant as parts of an asylum claim,” Osten says. “Part of our work was explaining the law and the asylum process to our clients.

“There is a huge difference in outcomes between people who've had preparation and people who haven't,” Goldman says, because it’s about more than declaring your life is in danger, it’s about anticipating the questions, such as, ‘If you’re in danger in your hometown, why can't you go to a different part of Honduras?’ “If you've never really thought about that, you might not be able to respond to that question,” she says. “If we give people even a few hours to anticipate it, it helps out.”

Although family separation has officially ended, there is no shortage of drama in the administration’s handling of immigration, whether it’s President Trump’s description of a caravan of migrants from Central America as a mix of criminals and “unknown Middle Easterners,” or his attempt to create an asylum ban, or his recent approval of border patrol agents’ use of tear gas on migrants, including children, at a closed border crossing near San Diego.

Jessaca Leinaweaver, an anthropologist and director of the Center for Latin American and Caribbean Studies at the Watson Institute, notes that “using family separation as a tool to demoralize and humiliate” people is nothing new, citing the removal of Native American children from their homes in the 19th and 20th centuries. The children were sent to government boarding schools to become “civilized.” What is new is what she calls the “spectacular” nature of these moments – “they’re dramatic, like a performance, so that people are seeing it.”

She worries about the repercussions of practices like family separation, which, she notes, breaches the UN Convention on the Right of the Child. “What are we producing if we create a generation of kids who are needlessly taken away from their parents? … We have all kinds of studies from developmental psychology and comparative human development and anthropology and social work about the importance of a parent. To separate them intentionally, you're potentially setting us up for a cycle, a vicious cycle.”

The concentration in Latin American and Caribbean Studies, or LACA, has long had a service-learning requirement, which last year was enhanced through CLACS’s incorporation into the Engaged Scholars Program offered by the Swearer Center. Concentrators are asked to apply scholarly knowledge to social challenges through internships, volunteer service, or work. Leinaweaver added that Osten and Goldman’s work is a powerful example of how socially and politically engaged members of the Brown community can make important contributions through their work beyond Brown’s borders.