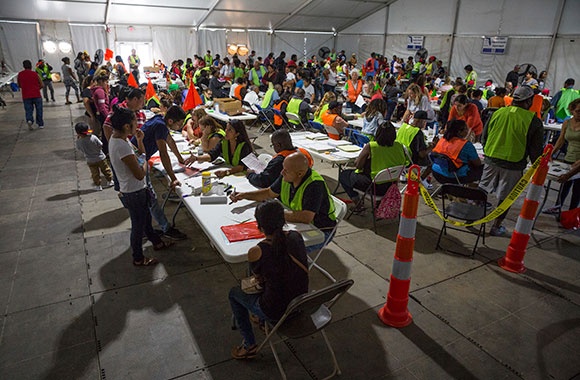 "These networks will be great incubators for new research projects and new research ideas. People may be able to feed [their data] into the database even if their projects are completely separate from the grant."

Civil-Military Humanitarian Response: How to Work Better Together

A two-year, $175,000 grant from the Carnegie Corporation of New York will support a collaborative research project between Brown University and the Naval War College. The project aims to establish an evidence base for civilian-military coordination in humanitarian response and create information-sharing networks among humanitarian responders, the military, and academics. The overarching objective is to provide the United Nations Office for the Coordination of Humanitarian Affairs (OCHA) the data it needs to develop improved guidelines for making civil-military coordination during disaster response as effective and efficient as it can be.

Optimizing this response is paramount. Over the past decade and a half, humanitarian spending increased from $2 billion to $28 billion, and, given the combination of climate change and conflicts around the world, the need for humanitarian response is only likely to increase. Yet as Adam Levine, director of the Humanitarian Innovation Initiative (HI2) at Brown’s Watson Institute for International and Public Affairs, points out, “There has not yet been a systematic effort to collect data or build an evidence base around civil-military coordination in humanitarian response. We’re basically at the same point where medicine was in the United States in the 1950s. We have a few good studies to show that a few things work. Most everything else is basically anecdote.”

HI2 is partnering with the Naval War College’s Humanitarian Response Program (HRP) to move from expert opinion to evidence in determining how best to work, Levine says, “in settings where systems are completely broken down.”

When disaster strikes—whether it’s an earthquake or a civil war, a massive flood or an Ebola outbreak—many actors rush in to help, including UN agencies, NGOs, international militaries, and, increasingly, local governments. And while in a dire emergency it might seem that more is better, not knowing the strengths, capabilities, and intentions of each can have hugely negative effects, from duplicated efforts to accidental bombings.

“Because of their logistical capabilities and privileged access, militaries often play central roles in the initial response to humanitarian crises, requiring humanitarian groups to partner with them,” says Kenneth Roth ’77, executive director of Human Rights Watch, and keynote speaker at the most recent HI2-HRP humanitarian response workshop.

Levine agrees. “[Militaries] can set up a biosafety level 4 laboratory to test samples in the middle of rural Liberia during an outbreak of Ebola. That's something that most NGOs don't have the capability to do,” he says.

The best relief efforts are complementary and coordinated—for example, calling in an aircraft carrier to desalinate a million liters of sea water that an NGO can then distribute to villages, or, as Levine did in Libya, running a field hospital while working with NATO and local militias to ensure they didn’t bomb it. In Liberia, during the Ebola outbreak, Levine coordinated with the U.S. Navy on laboratory tests while running an Ebola Treatment Unit for the humanitarian organization International Medical Corps. “We started sending them our lab samples to test and send back to us,” he says. “Before, it took five days for us to get the results. With the Navy, it took five hours.”

The UN especially is keen to know more about how military and civilian actors should work together so they can develop doctrine rooted in evidence. Levine points out that in many countries, the military is the first responder, so it behooves outside aid organizations to know how to work with them.

The grant will enable researchers from HI2 and the HRP to gather key information—such as what each nation’s military possesses in terms of technology and resources for virologists, bacteriologists, and parasitologists, so that humanitarian organizations know whom to call on during the next pandemic.

Cultural competence is important, too, so the team will conduct qualitative research to determine people’s perceptions about being treated by people in uniform. In some cases, for example, it will be best for civilian NGO doctors to provide the care while the military provides supplies on the back end. Even the seemingly effective HuMOCC, a sort of pop-up coordination center conceived by OCHA and deployed in recent disasters, needs data to back up its apparent success.

In addition to informing OCHA’s revised “Standards and Best Practices on Humanitarian Civil-Military Coordination,” Levine says, the data generated by the grant will be widely disseminated. The researchers plan to create an open-access database that all involved actors can use, and that with future support they hope to expand.

This kind of networking is fundamental to the HI2-HRP partnership. The two groups have already hosted two humanitarian response workshops—one at the NWC, in Newport, RI, and one at Brown—and a third, to take place in Providence, is planned for this summer. The research questions the grant will seek to answer were generated by last year’s gathering.

“We simply couldn’t be more excited and grateful for the amazing support we are receiving from the Carnegie Corporation. It will allow us to immediately accelerate and expand the critically important work we have been conducting with HI2 over the past two years,” says Dave Polatty, director of the Civilian-Military Humanitarian Response Program at the Naval War College. “Our goal to significantly improve humanitarian civil-military coordination in current and future humanitarian emergencies, whether they be conflict-related or the result of natural disasters, is that much closer to being realized.”