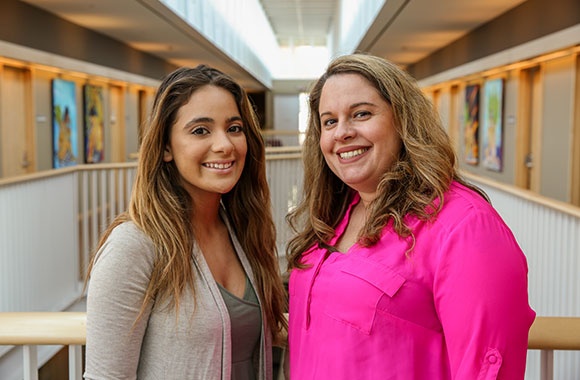 “I hope people at Brown will see that there's life off of the Hill. That there's a whole community out there who may not look or sound like you, but they're doing amazing work. Having their presence on campus is important if we are serious about engaging the community.”

A Win-Win: Internships That Are Good for Local Students and for Brown

While the denizens of Brown University are often reminded to venture off College Hill, one new initiative is bringing young people from Providence onto campus.

The Brown-Met internship program is the brainchild of Melissa Nicholaus, academic program manager for the public policy concentration. Last year, Nicholaus was accepted into the inaugural cohort of Brown’s Administrative Fellows Program, an initiative born out of the Diversity and Inclusion Action Plan and coordinated by of the Office of Institutional Equity and Diversity. The program provides a year of professional development opportunities to a diverse group of motivated staff members. As part of the program, all fellows must design, in partnership with a senior leader, and present a project that addresses an element of the University’s Diversity and Inclusion Plan. Nicholaus worked on her project with Shontay Delalue, vice president for institutional equity and diversity, selecting a part of the plan that focused on community engagement.

“I happened to have had a student from the Met the previous year and I loved having her here,” she says. “I thought, wouldn't it be great if I created a program for other people to have Met interns?”

The Met (short for Metropolitan Regional Career and Technical Center) is a network of six public high schools whose hallmark is a personalized curriculum based on the “learning by doing” approach. Of the school’s 810 students, 63 percent are minority and 68 percent are economically disadvantaged. Met students have done—and continue to do—internships at Brown, but this program aims to extend and systematize those experiences. In addition, says Nicholaus, “I wanted to make it an opportunity for students who might not think they have access to college to get a feel for what it's like to be on a college campus.”

A program manager walks into a restaurant…

One day, Nicholaus was dining at Chelo’s restaurant in East Providence when she and a member of the wait staff started talking. “I just happened to strike up a conversation with her, and she just happened to be a MET student. I told her about my project, and she said, ‘Could I intern for you?’”

Mary Villegas, the Met student in question, was eager to help Nicholaus develop the internship program with input “from the field,” as it were. “I thought there should be a student involved in the project to help Melissa understand how we feel and what we’re looking for,” says Villegas. “I wanted to be the bridge between the Met and Brown.”

At Brown, response to the program (which Nicholaus takes care to characterize as a “pilot”) has been very positive. Currently there are five internship positions across the University—two in different areas of Dining Services, Biology, the School for Professional Studies, and the Brazil Initiative—with several more to come. Nicholaus and Villegas are still tweaking the program. They are developing a list of additional activities for the interns, such as shadowing a student, attending a class or lecture, and exploring the library. They also hope to set up a meeting with Julio Reyes ’12, program director of the First-Generation College and Low-Income Student Center.

One of the greatest things about interning at Brown, according to Villegas, will be getting to see firsthand how college students live and what it’s like in the classroom, as well as being exposed to their area of interest, whether it’s computer science or medicine or restaurant management. Villegas is particularly interested in robotics and hopes to split her internship between Brown’s robotics lab and her work with Nicholaus.

For Ramon Stern—who, like Nicholaus, was in the first cohort of Administrative Fellows and is a member of Watson’s Diversity and Inclusion Action Plan committee—having an intern is helpful on a “practical level,” but it’s the mentoring piece he takes to heart. While his intern, Nicole Soto, has only been with him for a short time, “she is directly involved in … how we’re conceiving of ourselves and what we’re doing. She is taking an active role in thinking through what the Brazil Initiative is about,” he says.

Soto, a junior with interests in architecture and business, says the administrative and organization skills she’ll gain will be valuable, but the cultural content appealed to her as well. “I’m Hispanic, and I’m interested learning about the Latin culture. When I saw this listed, I said, ‘This is my internship.’ It’s a good fit.”

While the work experience will serve the Met students well, Stern and Nicholaus agree that the internships will enrich the Brown community as well. “This is a fantastic initiative on Melissa’s part,” says Stern. “We should have more programs that help create better relationships between the larger Rhode Island community and Brown. It goes in both directions.”

“I hope people at Brown will see that there's life off of the Hill,” says Nicholaus, “that there's a whole community out there who may not look or sound like you, but they're doing amazing work. Having their presence on campus is important if we are serious about engaging the community.”

Villegas has no doubt that she and her fellow interns bring value to Brown. “When people hear ‘high school student,’ they think ‘not responsible’ or ‘not enthusiastic to learn,’” she says. “But students at the Met create websites, they make robots, they do all these amazing things. We actually want to be here and we actually want to learn.”