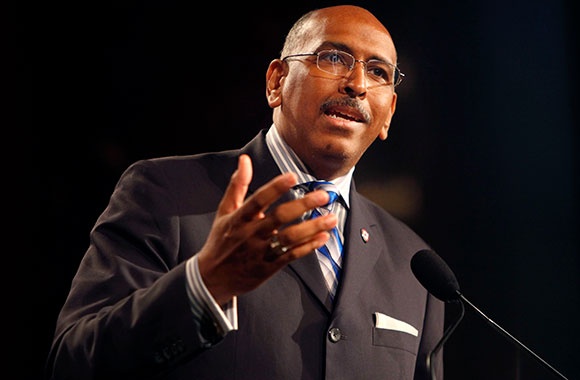 “As everyone knows who has read his work and seen him on TV, he is deeply insightful about politics and public affairs. Moreover, he is committed to open, respectful, and spirited dialogue across the political spectrum.”

While the acrimony between America’s two main political parties may seem to be at an all-time high, Michael Steele is here to remind you that so far, it hasn’t led to anything like the 18th-century duel between Aaron Burr and Alexander Hamilton or the 1856 caning of Republican Senator Charles Sumner by Democratic Representative Preston Brooks.

Steele, former chair of the Republican National Committee and Lieutenant Governor of Maryland, has been named a senior fellow at the Watson Institute for International and Public Affairs. Like his colleague and friend Tom Perez ’83, labor secretary under President Obama and current chair of the Democratic National Committee, he will lead a student study group this semester.

“Michael Steele has had an extraordinary and ongoing career spanning law, business, politics, public service, and journalism,” says Edward Steinfeld, director of the Watson Institute. “As everyone knows who has read his work and seen him on TV, he is deeply insightful about politics and public affairs. Moreover, he is committed to open, respectful, and spirited dialogue across the political spectrum.”

A conservative political commentator on MSNBC and the author of the book Right Now: A 12-Step Program for Defeating the Obama Agenda, Steele will lead a series of five one-and-a-half-hour sessions titled “The Dismantling and Rebranding of American Politics.” With the current political moment as a backdrop, the sessions will explore America’s political parties in depth, as well as the rise of tribalism, the importance of political slogans, the role of money in elections, and the emergence of such movements as #MeToo, Occupy Wall Street, and Black Lives Matter. The series will culminate in a close look at and analysis of the lead-up to the 2018 midterm elections.

“Just when you think you know everything about American politics, along comes Donald Trump. So it’s become essential to understand the why and how of one of the most volatile periods in America’s political history,” says Steele. “I’m excited the Watson Institute has offered me the opportunity to provide students a front row seat to some perspectives they may not otherwise appreciate about our culture, our politics, and themselves. It’s not enough to react; you also have to know how to respond. That’s when things get interesting.”

The additional series was added after the popularity of Perez’s study groups, which he led in the fall and spring semesters last year. The choice of someone from the other side of the aisle, as it were, was no accident.

“Michael Steele and Tom Perez approach issues from different political perspectives, and they probably disagree about many aspects of public policy,” Steinfeld says. “They both, however, are champions of open discussion and the sharing of diverse ideas. Their willingness to listen, learn, and seek solutions across the partisan divide reflects a civicness and openness to learning that are central to the mission of the Watson Institute and Brown University as a whole.”

The study groups are intended to help students apply theory and research to real world challenges. Both Steele and Perez will invite other prominent practitioners as guest speakers, giving students a chance to get up close and personal with veterans from the field. No course credit is given for the study groups, but there will be suggested readings as well as informal lunches and office hours. On October 25 and November 19, Steele and Perez will also host two public events focused on the midterm elections.

Registration will open for Brown University undergraduate and graduate students on September 5. A link to the application will be available on the Watson Institute homepage and in Today @ Brown.

Listen to Michael Steele discuss the future of the Republican party and more on this episode of Trending Globally: Politics and Policy.