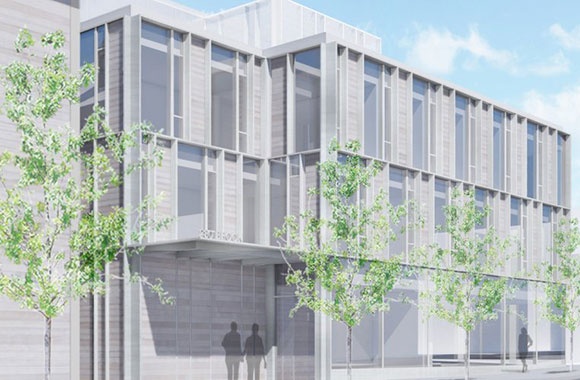 "It’s our academic mission to include as many voices as possible."

Late this fall, construction will be completed on the Watson Institute expansion project. The building will officially open in February, at the start of the spring 2019 term.

Begun in June 2017, the ambitious project is designed to accommodate the Watson Institute’s growth and reflect its commitment to fostering community. Comprising both construction of a new building and renovation of an existing one, the project also features carefully planned landscaping that will connect the four Watson buildings to each other and the entire complex to the Brown campus.

The buildings will open during the Spring 2019 semester.

We recently sat down with Edward Steinfeld, director of the Watson Institute, and asked him for an update.

WI: What is the main purpose of the new building?

ES: From the start, the idea behind the design was that if we’re serious about inclusion—inclusion of all different kinds of community members, students, faculty, visitors, as well as intellectual perspectives—the physical space has to reflect that aspiration. The current buildings [at 111 Thayer Street and 59 Charlesfield] are beautiful, but they don’t represent the entirety of who and what we are, or what we want to become. The new building project at its core is about the creation of public space for the freest, most exuberant, inclusive, intellectually incisive exchange of ideas possible. I believe firmly that the new building expresses a spirit of radical ecumenicism, the kind of ethic that a Brown education is all about.

WI: What do you mean by “public” space?

ES: I mean space that is not “owned.” I mean a commons, a space that is open to all and shared by all. Or, to borrow the ancient Greek concept, I mean an agora—a central public gathering place where all people, no matter who they are, are warmly welcomed. This is a place where anyone can walk in, grab a cup of coffee, and sit around and chat or do work. My hope is that people will be bumping into each other, and all manner of conversations – whether planned or serendipitous – will ensue. To me that’s what learning is fundamentally about. I don’t care where one sits in the formal Watson hierarchy or what program or concentration one belongs to. Everyone bears unique knowledge and experiences, everyone can be a teacher and a student, and the more opportunities we have to interact, the more we’ll all learn.

WI: How does the design of the building reflect that vision?

ES: There is a wide-open, multilevel space in the middle of the building. In addition to daily informal use, we’ll occasionally hold large gatherings there, particularly for speakers or panels we don’t want to convene in a lecture hall. In some cases, we’ll want to avoid the rigidities of formal lecture spaces. When we convene in the more open agora, people will be able to stand on different levels and look down into the space and watch what’s happening.

WI: What other kinds of space does the new building contain?

ES: In addition to lots of sitting areas that will feel private, there are small meeting rooms where four to five people can gather to study, or talk, or Skype. These are glassed in, so they’re open but acoustically private. Finally, we’re experimenting with the “hoteling” approach by including some reservation-based offices.

WI: Who will be housed in the new building?

ES: Our growing regional programs, our postdoctoral fellows, some of our academic programs, and visitors.

WI: Does the new building change how the existing one, at 111 Thayer, will be used?

ES: In some respects, 111 Thayer will continue to be used much in the way it has in the past. The building is beautiful, but more of a quiet work space for faculty and administrative staff. That won’t change. And we will continue to make full use of the Joukowsky Forum, McKinney, and the Kim Koo Library. There will, however, be one very big and decidedly positive change. Brown’s political science department will move into the third floor of 111 Thayer Street. My great hope is that over the long run, other social science departments will move into closer proximity as well. Much to our benefit, all Watson faculty are jointly appointed with disciplinary departments. Being in close proximity with these departments is great for learning.

WI: How does the new building relate to the ones around it?

ES: I see the building as part of a larger organic whole. It’s designed to work with 59 Charlesfield and 111 Thayer, as well as with buildings Brown might build nearby in the future. The entryway of 111 Thayer in many ways serves as a pathway into the quad. The quad can also be accessed from various points on Brook, Charlesfield, and Benevolent streets. The landscape design fosters movement and connection across the quad and between the various buildings. We want to encourage people to flow through the buildings.

WI: How do you see this building’s role on the larger Brown campus?

ES: I hope it will be a gateway to the campus. But also I hope people passing through it will stop a while and see what’s going on. I want it to be a destination for people who are interested in international and public affairs, and those who don’t think they are. It’s our academic mission to include as many voices as possible. I want my biggest problem to be that the building is too noisy and there are way too many people using it. If I had that problem, it wouldn’t be a problem.