A project involving both historic and new buildings transforms the corner of Brook and Charlesfield streets.

The sounds of cool jazz filled the airy, 1,400-square-foot agora of Stephen Robert ’62 Hall yesterday morning during an open house for students to mark the start of reading period. 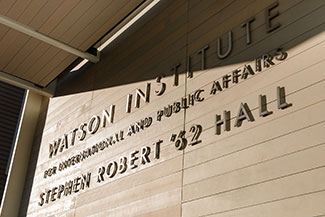 But students were making the most of the Watson Institute’s recently completed expansion project long before the spread of pastries, juice, and coffee appeared yesterday. “I spent six hours studying here the other day,” said modern culture and media concentrator Olivia Kan-Sperling ’19. Along with fellow juniors Claire Schlaikyer and Isabelle Rea, Kan-Sperling lives in Fox Point and is glad to have new study space just up the road at 280 Brook Street. “The building sort of re-orients the campus,” she said.

Public policy concentrator Paola Vasquez ’19, who lives in Perkins Hall, said she and fellow senior Leah Lam had been spending a lot of time in the recently opened School of Engineering, but Robert Hall has quickly become their “number-one go-to study space.” Lam said the bright white walls and the natural light “make you feel really motivated to study.” As if to prove her point, the small tables on the second floor were all occupied by students sitting alone and in two’s and three’s, most with headphones on, all of them staring intently at their laptop screens.

“There’s not a lot of collaborative study space on campus,” said Julia Kirschenbaum ’19, a development studies concentrator. “This place offers that.” She’s right: the new building adds 3,600 square feet of “soft,” or open, space, as well as 25 study spots in the form of conference rooms, communal tables, and lounges located on three floors. 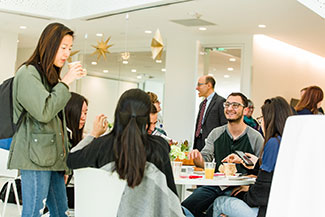 The facility houses several of Watson’s centers and institutes but attracts all kinds of students, which was part of Director Edward Steinfeld’s vision. “Seeing the building become activated is thrilling,” he said, noting that while it’s reading period now, “the spring semester will bring new ways for us to use it. I hope people will get in the habit of coming by, getting a coffee in the café, meeting friends. The building is organic,” he added, “and it will respond to the creativity of our community.” He predicts that the building itself and the activities within it will pull more and more people to the Watson quadrangle, shifting the campus’s center of gravity away from the main green.

And the building has already made its film debut, having served as the setting for a film Manuel Pereira Arias ’19, a double concentrator in political science and economics and an administrative assistant at Watson, recently directed for Brown Motion Pictures.Completed in just over two years, Robert Hall expands the Watson Institute by 31,000 square feet of both renovated and newly constructed space. This marriage of old and new contribute to what Steinfeld describes as a “bold architectural statement.” Indeed, while there’s no lack of pristine white walls, the building contains few right angles. With forty-two percent of the façade consisting of glass, Robert Hall is flooded with light in the day, while at night it’s the building itself that seems to glow, thanks to the 25 lights suspended above the agora.