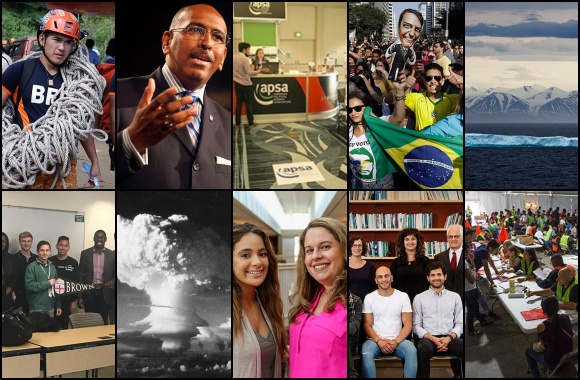 It’s hard to believe a year’s gone by. Here’s your chance to take another look at our most-read stories of 2018.

10. Brazil Elections: Who's in Play and What’s at Stake
Historian and Brazil expert James N. Green discussed both rounds of the presidential elections in a Q&A and a series of Watson-produced podcasts.

8. Civil-Military Humanitarian Response: How to Work Better Together
Watson’s Humanitarian Innovation Initiative and the Naval War College received a grant from the Carnegie Corporation to support a collaborative research project that will create an evidence base for civilian-military coordination as well as information-sharing networks.

7. BIARI Beyond Brown: Improving Disaster Response Where Disasters Happen
The Brown University International Advanced Research Institutes (BIARI) hosts a regionally-focused conference, titled Community Resilience for Natural Disasters, in the Philippines. This new model, BIARI Beyond Brown, is locally adapted and conducted in partnership with public/private sector partners on the ground.

6. From Boulder to Bonn: Climate Change Is the #1 Crisis
An MPA student joined 11 Brown students in Bonn, Germany, to attend COP23, organized by the United Nations Framework Convention on Climate Change.

5. Is Nuclear War No Longer Taboo? A Conversation with Professor Nina Tannenwald
In light of tensions between the United States and North Korea, the director of Watson’s international relations concentration compared the danger of nuclear annihilation in 2018 and 1953, the height of the Cold War.

4. Brown’s Third Cohort of Brown in Washington Students Placed at Public and Nonprofit Sector Agencies across D.C.
The Swearer Center at Brown University in collaboration with the Watson Institute for International and Public Affairs announced the newest cohort of the Brown in Washington fellowship program participants. The selection of these students from a variety of backgrounds and majors, contribute to the missions of both the Swearer Center and the Watson Institute, while providing practical experience in the public policy sphere.

3. A Win-Win: Internships That Are Good for Local Students and for Brown
Melissa Nicholaus, academic program manager for the public policy concentration, created an internship program in which Providence public high school students gain work experience at Brown.