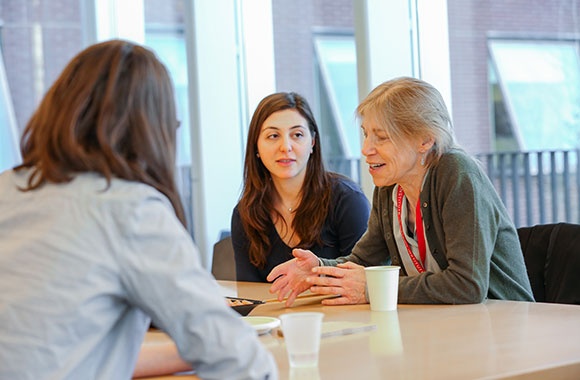 Alissa J. Rubin is the New York Times Paris Bureau Chief and a Pulitzer Prize winning journalist. She previously served as the Times’ Bureau Chief in Baghdad and Afghanistan

Q: Iraq declared victory over ISIS in December. What’s next for the country and its fight against terrorism?

A: That’s a really difficult question.

First of all, declaring victory doesn’t make it so. Second of all, [Iraq] is a country in the middle of a very difficult set of decisions about the extent to which it is going to give power to different groups--Sunni Arabs being a very big one, but also Kurds. For as long as they make the determination that they’re not going to give those groups the kind of power that the Shia plurality has, it is going to be very difficult to stabilize the country.

Also, ISIS may have been extirpated and killed in Mosul, but certainly they weren’t all killed. I was just back in the region, and there is a lot of worry in the north that there are people walking around who were active ISIS members who just shaved their beards, cut their hair, and put on civilian clothes. Are those people really feeling friendlier? Or do they feel really angry that they were defeated? My guess is that they feel pretty angry.

So, I think we’re in a period where the decisions are really going to count that the government makes. The decisions will also count a lot in terms of what they are going to make of their relationship with Iran. Because that too will determine whether or not it will be a more peaceful or less peaceful future. And it’s very difficult to say that there’s a ‘right’ decision.

Q: How can American intervention help in that process instead of hindering it?

A: Well I would be very unsure that it could help. American intervention was necessary to help get rid of ISIS, though they probably could have done it with just the Iranians. But, the U.S. currently has a very strong anti-Iran policy and that’s not necessarily helpful, particularly to Baghdad. You can talk about standing up to Iran and limiting influence, but you also have to understand the pressures on the Iraqi government and similarly on the Syrian government. The role the U.S. plays has to be very delicately balanced. You can’t just smash Iran and use extravagant rhetoric and expect that Iraqis-- some of whom rely on Iran for their livelihoods in the government context-- are going to then be willing to listen to you. They’re not. They’re going to be listening to their friends – I mean Iran-- who are also neighbors and who have helped them politically and financially for many years. So, I don’t profess to know what U.S policy should be. I’m relieved I don’t have to make it. It’s a moment when the U.S has to be very careful not to make things worse.

Q: With that in mind, is there an issue in Iraq or Afghanistan that you wish would receive more attention from policymakers and the public?

A: On Afghanistan, I go back to my history background. Just read the past: nobody who comes from the outside ever wins there at the end of the day. Genghis Khan lasted longer than most but, in the end, he was forced to leave. The Persians, the Brits, the Russians and finally us. What exactly are we hoping for?

On the other hand, if we left, Al-Qaeda would be back. Or ISIS. Or some mélange of the two, because the country would become ungoverned space. There’s no question. The best thing we can do is to be honest about why we’re there and try not to get too mucked up with the government because we’ve always supported bad actors.

Q: I like to return to something you mentioned earlier about the difficulty of reintegrating ISIS combatants into Iraqi society. You’ve also written about transitioning returning fighters into Europe, particularly Paris where you’re stationed. What should this process look like?

A: I guess I feel like you’re always a citizen of the country you’re from. But that doesn’t necessarily mean you have the same rights if you have contributed to fighting against your country. The difficulty in the ISIS framework is that you have a lot of people who were not involved directly in the act of physical warfare but were associated with it or supportive of it. They were the wives or the older adolescent children of ISIS fighters. What exactly you do about them becomes very muddy. I have really been torn—I don’t know that I have a view.

I think what I can best do as a journalist is to write about the moral hazard of each choice. Because there are moral hazards. If they welcome [fighters] back, they will undoubtedly let some go FREE on the theory that they were bewitched into supporting ISIS and it was all a mistake, as some of the fighters will claim. And some of them will be lying.  Those people could become terrorists at home. That’s a reality.

Q: One last question. You’ve put yourself in dangerous situations. What motivates you to take risks in order to tell stories?

A: Well, I never acknowledge that I take a risk. I think very hard about how to make whatever it is I’m doing not risky. But, I’m also really curious. If I think there’s a way to answer a question, I’ll go to wherever I need to go to answer it. Mostly that’s worked out. Once in a while it hasn’t.

Or in some cases I felt an obligation. If we didn’t tell it—I don’t want to say nobody would tell it because that would delusional—but it would be less told. And some things need to be told, in my opinion. Sometimes I guess that involved unanticipated risks.

For the most part, I believe that you shouldn’t take risks because you have to be able to come back to tell the story. I do my maximum to make sure that happens. A dead reporter or a kidnapped reporter is worthless.