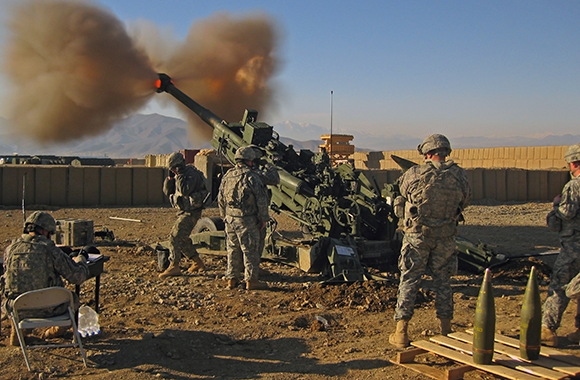 Ground-breaking research by the Watson Institute’s Costs of War project reveals that a staggering $5.6 trillion has been spent and obligated to be spent by the United States on the post-9/11 wars, in contrast to the Pentagon’s estimated price tag of $1.5 trillion for the same wars. The Pentagon’s war budget, called the Overseas Contingency Operations budget, simply doesn’t represent war’s true costs, and neither Congress nor the Pentagon has been motivated to evaluate them comprehensively, says Catherine Lutz, co-director of the project. Since its founding in 2011, the project has issued more than three dozen reports, with contributions from several dozen legal experts, researchers, and scholars, including several from the Watson Institute.

In contrast to the U.S. government’s more narrowly defined estimate, the report, “United States Budgetary Costs of Post 9/11 Wars Through FY 2018: A Summary of the $5.6 Trillion in Costs for the US Wars in Iraq, Syria, Afghanistan and Pakistan, and Post-9/11 Veterans Care and Homeland Security,” also factors in additional Homeland Security and Veterans Administration expenses as well as interest paid on monies borrowed to fund the wars. While comprehensive, the report is not all-inclusive; it omits certain expenses, which could total billions of dollars, including the federal government’s gifts of excess defense items to Afghanistan, future interest payments on borrowed monies, future medical costs for veterans, and the value of U.S. allies’ military spending on these wars.

“Through history, governments have often sold war to their citizens with the message that they are going to be simple, fast, and cheap, but these promises virtually never pan out.”

Nevertheless, these costs are often ignored or disregarded, says Lutz, who is also the Thomas J. Watson, Jr. Family Professor of Anthropology and International Studies at Watson. “Most people don’t experience these costs yet. Because money has been borrowed to pay for the post-9/11 wars, they’ve felt cost-free,” says Lutz. “People aren’t paying higher taxes [to fund war efforts], something that has not been true in any American war before this.” Moreover, less than 1 percent of the American population is in the military and another few percent has an immediate family member in the service, which also distances the vast majority from military issues.

Neta C. Crawford ‘85, a professor of political science at Boston University, authored the report. She and Lutz have studied war extensively, including researching U.S. military bases’ impact on their local communities. Crawford and Stephanie Savell also co-direct the Costs of War project.

Why is Watson’s project the first institution to comprehensively address war’s true costs? “It’s difficult [to do these analyses] … and, for too many people in the United States who make money [from war], these costs are not bad news, but good news,” says Lutz. The Pentagon has failed to audit itself more generally, explains Lutz, and this has also made it difficult to assess how its vast budget is being spent.

First and foremost, Lutz hopes that this report will make new wars slightly less likely. “Through history, governments have often sold war to their citizens with the message that they are going to be simple, fast, and cheap, but these promises virtually never pan out,” she says. Should the U.S. government decide to invade North Korea, for example, the public might be persuaded that the invasion can be readily accomplished. This latest report documents military invasions’ negative costs for people and budgets and demonstrates the dangers of such erroneous assumptions.

A small fraction of the costs of this “credit-card war” would equal, for example, the entire budget of the Food and Drug Administration or the Environmental Protection Agency, says Lutz.

Too, Costs of War project reports and other reports from non-governmental organizations looking at the wars’ consequences more comprehensively can produce positive feedback loops.  When data on the number of civilians killed in U.S. air raids become more transparent and accessible, for example, we can demonstrate that such transparency has sometimes lead to a lower civilian death rate, Lutz says.

“Our reports are a resource for the many people who get up every morning in and outside government to work on a more rational foreign policy,” she says, noting that these evidence-based reports are critically important to those who oppose an interventionist, non-diplomatic/military-focused foreign policy.

For more about the Costs of War Project, visit watson.brown.edu/costsofwar/