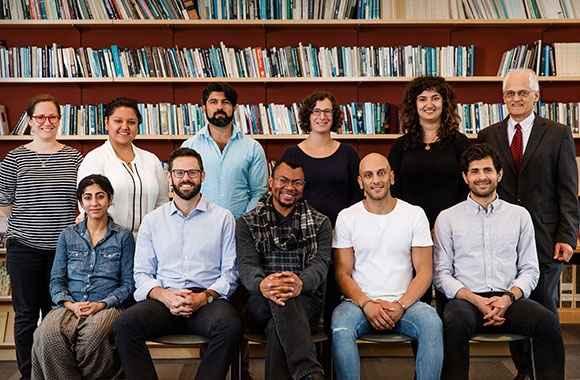 "These young scholars represent the future of their fields."

“The Watson Institute emphasizes a cooperative approach to academic inquiry, and our postdoctoral program fosters mutual support among the very talented young scholars who become fellows,” according to J. Nicholas Ziegler, director of the postdoctoral program since 2017 and professor of international and public affairs. The program requires the fellows to present their work to faculty, other scholars, and their peer fellows. Three departing fellows discuss their fellowship experiences and plans.

Noting Watson’s collaborative, multidisciplinary approach to teaching and research, Narges Bajoghli says, “I’m grateful that I’ve been able to engage with and learn from scholars across different fields.” Bajoghli, who is also an affiliated fellow at Watson’s Humanitarian Innovation Initiative (H12), and Yusuf Neggers both say they intend to carry Watson’s supportive, interdisciplinary, and intellectually generous spirit into their positions as assistant professor in Middle East studies at the School of Advanced International Studies at Johns Hopkins University and assistant professor of public policy at the Ford School of Public Policy at the University of Michigan, respectively.

“Watson’s rich cohort of international graduate students, scholars, and professors bring global perspectives – from their own country or from doing field work in foreign countries,” says Ali Kadivar, who will soon begin a position as assistant professor of sociology and international studies at Boston College. “We all share this experience of being foreigners and immigrants.”

“While our two-year fellowship program competes with the best of other multiyear postdoctoral fellowships, ours is different,” says Ziegler. Fellows are selected for dissertations that represent the highest quality of discipline-based research while simultaneously addressing real-world problems. But unlike some other institutions, where postdoctoral fellows are hired to support someone else’s research, Ziegler says, “we carefully protect these fellows and insulate them from other people’s agendas, keeping them focused on their own research, writing, and publication trajectory.”

Kadivar received Watson Institute funding to hire an undergraduate research assistant for his forthcoming paper, “Sticks, Stones and Molotov Cocktails: Unarmed Collective Violence and Democratization.” The author or co-author of three additional papers addressing issues of democracy and elections in the Middle Eastern, Kadivar also has written several newspaper and magazine articles, primarily on issues relating to Iran, during his fellowship.

Bajoghli, who has submitted her book manuscript, “Anxieties of Power: Sustaining the Revolution in Iran,” to Stanford University, is working on her third documentary, “America Held Hostage,” about the Iranian hostage crisis. “I was in college during 9/11, so it was important for me to try to be a scholar offering a different perspective from the one-dimensional depictions of Iraq and Iran frequently circulated in the United States,” she says. Last November, her one-day conference, “Middle East Toxic Wars,” brought scholars from across the United States and Europe to Brown to discuss chemical warfare in the Middle East.

Teaching is integral, not optional

“By requiring fellows to teach one undergraduate course each year,” Ziegler says, “we ensure their latest research filters into undergraduate education. This teaching obligation also provides a bonding experience for the fellows – who compare notes about their teaching experiences – and strengthens their professional development.”

Engaged and energetic students make the academic atmosphere at Brown University “a dream for a teacher,” says Bajoghli, who says she enjoyed teaching “Middle East: Media Wars.” Kadivar twice taught the course, “Reassessing Contentious Politics and Social Movements” with cases from the Middle East. Neggers says teaching one core MPA course, “Program Evaluation and Policy Analysis,” was very rewarding, as he enjoyed connecting with graduate students who will make an impact upon joining the work force.

“The fellows are really quite amazing and are important to all of Watson’s constituencies,” Ziegler says. “They bring close familiarity with the latest literature into our discussion and are therefore extremely interesting for the faculty here. Their dissertations are among the best in the world in their fields. These fellows are valuable examples for graduate students to see in action, and they’re often exceptional teachers as well.”

Commending former program directors Catherine Lutz and Keith Brown for their work in making the program a premier fellowship for social scientists, Ziegler says, “I want to continue to reinforce what they did. These young scholars represent the future of their fields.”