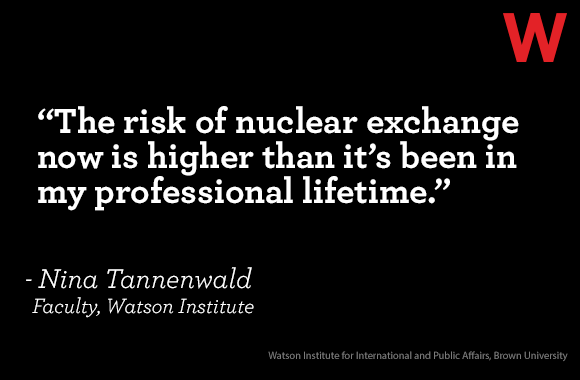 Is Nuclear War No Longer Taboo?

A Conversation with Professor Nina Tannenwald

The doomsday clock now stands at two minutes to midnight--the same time as it was in 1953 at the height of the Cold War. Is the danger of nuclear annihilation really the same?

“Yes and no,” says the Watson Institute’s Professor Nina Tannenwald. Tannenwald, who has written extensively on nuclear weapons, can see both sides.

On the one hand, “the risk of nuclear exchange now is higher than it’s been in my professional lifetime” says Tannenwald. “There is zero chance at this point that North Korea is going to get rid of its nuclear weapons. When North Korea’s leaders saw what the United States did in Iraq in 2003, engaging in regime change and overthrowing Saddam Hussein, and then again in Libya in 2011, overthrowing Qaddafi,” they learned that only nuclear weapons could “prevent the U.S from coming in and engaging in regime change.”

Theoretically, “there would be room for [an] agreement” that guaranteed the survival of the Kim Jong Un regime “in exchange for significant constraints on the arsenal and the missiles” of North Korea. With the current administration, nonetheless, that hope looks dim.

"The quicker we move on from the fiction that we are ever going to get them to get rid of their nukes, the more likely we are to deescalate this crisis. We are going to have to make some kind of commitment that we’re not going to engage in regime change."

A brighter possibility is the nuclear taboo, the “72-year tradition of non-use of nuclear weapons. Most people now think that nuclear weapons really aren’t to be used. Since the 1950s, most American presidents have shared this view. And, despite all the talk from Trump and Kim Jong-Un, the North Korean leader, it’s still in effect.”

The nuclear taboo reminds us that a nuclear war would kill millions of people on both sides. After all, says Tannenwald, “there is a lot of incentive for both countries to be very cautious about intentionally launching a war that could escalate to a nuclear exchange. North Korea could be wiped out and the United States would have catastrophic damage.”