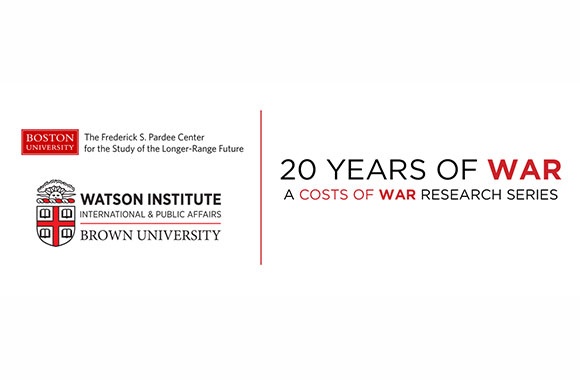 The Watson Institute and the Frederick S. Pardee Center for the Study of the Longer-Range Future at Boston University have launched a new collaboration to expand the Costs of War project. The new “20 Years of War” research series is funded by a generous grant from the Carnegie Corporation of New York through the Pardee Center. BU’s College of Arts and Sciences and the Provost, along with the Watson Institute, are also supporting the project.

Over the course of the past decade, the Costs of War project at the Watson Institute has focused on the human, financial, environmental, social, and political costs and consequences of the post-9/11 wars and illustrated how the impacts of the wars will ripple into the future. To date, the project has produced over 70 papers and garnered significant attention from policymakers and major media outlets.

Beginning in Fall 2019, the two-year 20 Years of War series will produce a new set of analyses to mark the 20th anniversary of the beginning of the post-9/11 wars. This effort will include updating existing papers as well as producing new reports in order to provide a comprehensive overview of these wars’ many costs.

Founded in 2010 by Neta Crawford, Professor and Chair of the Department of Political Science at Boston University, and Catherine Lutz, Thomas J. Watson Jr. Family Professor of Anthropology and International Studies at Brown University, the Costs of War project draws on a global network of over 50 researchers, including scholars, legal experts, human rights practitioners, and physicians.

Dr. Heidi Peltier, an economist who has been in the Costs of War network for a decade, has joined the Pardee Center and the Department of Political Science as a research professor. Dr. Peltier will direct the 20 Years of War series at the Pardee Center, coordinating the new work in collaboration with the ongoing Costs of War project at Brown.