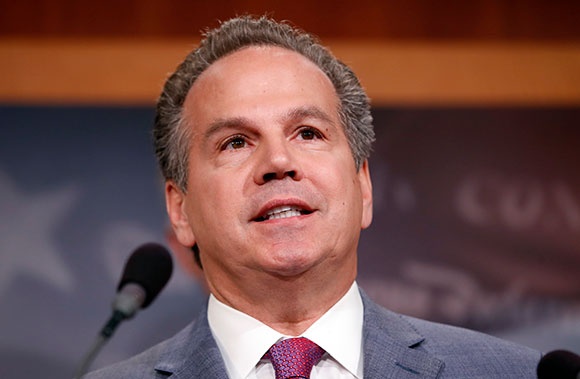 "I enjoy opportunities to engage with students about the work that is happening in Washington, D.C., and critically analyze issues that are important to our democracy."

“I enjoy opportunities to engage with students about the work that is happening in Washington, D.C., and critically analyze issues that are important to our democracy,” says Rep. Cicilline in a telephone interview. “Teaching is a great way to stay engaged and share my current perspectives. I hope to ignite students’ interest in public policy and maybe inspire some students to serve in public office.”

Cicilline is no stranger to teaching graduate students, an experience he finds enjoyable and meaningful. Earlier in his career, he taught Advanced Problems in Constitutional Law and co-taught Advanced Trial Practice at Roger Williams University Law School. A former Rhode Island House representative and two-term mayor of Providence before being elected to the U.S. House in 2011, Cicilline has long been interested in politics and public policy. As a Brown undergraduate, Cicilline, along with the late John F. Kennedy, Jr., and William Mondale (son of former vice president Walter Mondale), co-founded a College Democrats chapter.

Cicilline created the curriculum and chose the assigned texts for the six-week course, which will explore the consequences and causes of partisan polarization, focusing specifically on how polarization impacts the development and implementation of U.S. national policy. Using historical and contemporary examples of successful and failed policy-making in our splintered environment, the course will examine how effective political leadership and entrepreneurship can promote widely-supported policies and overcome barriers to adopting such policies. As a Member of Congress serving in a Republican-controlled and Democratic-controlled House, the newly-named chair of the Democratic Policy and Communications Committee, member of the Foreign Affairs and Judiciary Committees, and incoming chair of the Judiciary Committee’s Antitrust Subcommittee, he is ideally suited to analyze how polarization can negatively impact issues of national importance.

“I’m excited about being more deeply connected to Brown University; it’s a special place,” says Cicilline, who has spoken at the Brown campus, including the Watson Institute, in career roundtables and other programs. In this, his inaugural opportunity to teach at the Watson Institute, he anticipates opportunities to spend time with great young people about their perspectives on national policies, the difficult political divide, and welcomes hearing their ideas about how we can respond to our deeply partisan democracy. “I’ll share my experiences of being in Congress and [impart] a better understanding of how our public policy is developed or not.”

“Since graduating from Brown in 1983, Congressman Cicilline has devoted his entire professional life to public service.  Whether as a public defender in the District of Columbia, a member of the Rhode Island General Assembly, the mayor of Providence, or as a member of the United States Congress, David Cicilline has participated in the design and implementation of policies that shape the lives of citizens in absolutely fundamental ways,” said Ed Steinfeld, Watson Institute director. “No matter where we reside on the political spectrum, we have so much to learn from Congressman Cicilline’s experience and perspectives.  I’m thrilled and grateful he’s willing to join our scholarly community.”