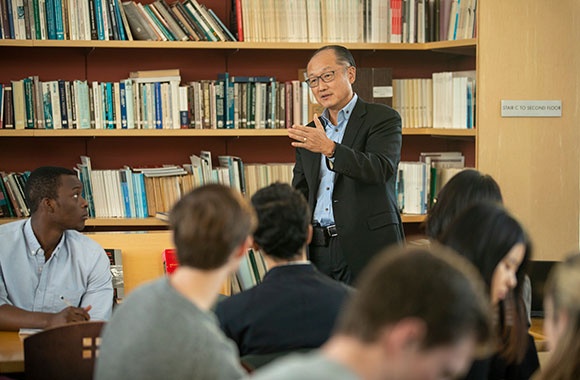 “I hope I can bring insights as a practitioner of global economic development and global multilateral politics."

In the Room Where It Happens: Jim Yong Kim ’82 to Bring Real-World Experience to Watson

Poverty, inequality, and lack of access to health care are issues Jim Yong Kim is known for tackling throughout his career – as a co-founder, with Paul Farmer, of Partners in Health, as chair of Global Health and Social Medicine at Harvard, as director of the HIV Department at the World Health Organization, and as president of the World Bank Group. Long before his career began, however, his commitment to social justice was honed as a pre-med at Brown, where he spent many a late evening at the then-Third World Center. Located in the basement of Rites and Reason, the TWC was where this Korean-American from Iowa could “drink in the enormous diversity of perspectives, of experiences, of the institution.”

Now Kim can have an impact on today’s Brown students, as a senior fellow at the Watson Institute, effective February 1. What he brings to the table, he says, is the kind of experience that can deepen students’ understanding of how policy is made.

“I hope I can bring insights as a practitioner of global economic development, global health, and multilateral politics,” Kim says. “I want to give students a sense of how different multilateral institutions work and how the leaders and staff of those institutions can have an impact.”

Often, he says, students have great ideas about how to improve the world, but are mistaken about how to get things done. “I've been in the room where the sausage is made,” says Kim, “so I hope I can help students think more strategically about how they can change the world with their great ideas and their passion for making a difference.”

Kim says he plans to give lectures and lead smaller discussions on different aspects of economic development, global health, global education, and global policy. He also hopes to attract to Brown global leaders he worked with at the World Bank Group. “I think it would be great to bring in thinkers and leaders in the world of development to have a public conversation with Chris Paxson.”

If Kim inspires – and equips – students to go out and change the world, it will be returning the favor of his years of study here. “Brown really helped me set the direction of my life,” he says.