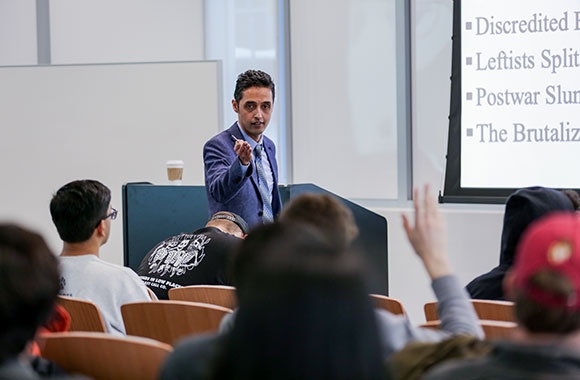 “This course is a great example of the many ways in which the NWC and Watson can complement each other’s strengths, learn from each other, and together strive to address the great policy challenges of our time."

A new course is being taught this semester by Michael Dennis, a historian of science and technology, and Anand Toprani, a diplomatic and military historian and author of Oil and the Great Powers. Both are professors of strategy and policy at the Naval War College in Newport.

Titled “The Political Economy of Strategy: From the Financial Revolution to the Revolution in Military Affairs,” their course examines economic competition and economic warfare among the world’s great powers. Dennis and Toprani developed the course, which uses a case-study approach, thanks to a generous grant from the Stanton Foundation. They have already taught it to students in the Advanced Strategy Program at the NWC and are currently teaching it – separately – to undergraduates at Brown.

The course, Dennis says, was intentionally designed to be taught to these two different populations – neither of whom was overly familiar with the material, he adds. “The War College students have spent their entire lives in a military environment. They have little to no experience with the civilian world. They see their problem set purely in terms of the military instrument. Conversely,” he says, “we have students here [at Brown] who are unaware of the strategic dimensions of contemporary conflict. But they’re profoundly curious. And they should be – this is a major part of the U.S. national budget.”

On April 11, Toprani notes, students from the NWC will join Brown students in Stephen Robert ’62 Hall’s classroom 101. A gathering after class will enable members of the two groups to get to know each other.

“This course is a great example of the many ways in which the NWC and Watson can complement each other’s strengths, learn from each other, and together strive to address the great policy challenges of our time,” says Edward Steinfeld, director of the Watson Institute.

With sections titled “Can you Starve an Economy?” and “Do Numbers Kill? Sanctions as a Coercive Tool,” the course is relevant on both sides of Narragansett Bay. “We're at this remarkable period in our history where whatever else you'll say about our president, he's forcing us to ask ourselves very serious questions: Do we want to keep paying the price of being a great power? What are the actual benefits we accrue from being a hegemon?” Toprani says. “If the military officers are there to provide professional guidance to their civilian decision makers and Brown students are there to play the role of informed citizens and future policymakers, they all need to understand more about how it is we found ourselves in this position.”

Take U.S.-China relations. “There's a grave sense of anxiety that the era of American primacy is passing, both economically and militarily, and we are trying to think about how to live with China,” Dennis says. “How can we compete with China without coming into conflict with China?”

“The two nations are tightly entangled,” he adds, “but that doesn’t mean war is inevitable. We want our students to know that there are always off-ramps. To see the options that others may not is what the course is all about.” Citing the “paradoxical trinity of reason, passion, and chance” posited by famed Prussian general Carl von Clausewitz, they teach their students such notions as “just because you win, doesn’t mean you were right” and “you can do everything right and still not get what you want.”

Streator Bates ’19 enjoys the professors’ “unique banter and repartee, which make the fascinating course that much more accessible and engaging when combined with their vast knowledge of the subject.” The course, he says, has given him a “deeper understanding of how economies can be used not just to facilitate a conflict, but how they are often wielded as the primary drivers and catalysts of warfare.”

The pair really does have chemistry, according to freshman Dheraj Ghanjikunta “My favorite part of the class is the professors themselves. They're both brilliant, and the dynamic between them adds a lot to the depth of the class.” They’ve also opened his eyes to the non-military tools that states can use to resolve conflicts. “You're never really aware of how essential the economy is in terms of defense strategy, and this is what the class teaches you,” he says.

That should please Dennis, who says, “If we make students aware of the penumbra of possibilities other than war, we will have done our job.”

Dennis and Toprani spoke to the Watson Institute in a non-official capacity. The views they expressed were their own and not those of the U.S. Government.