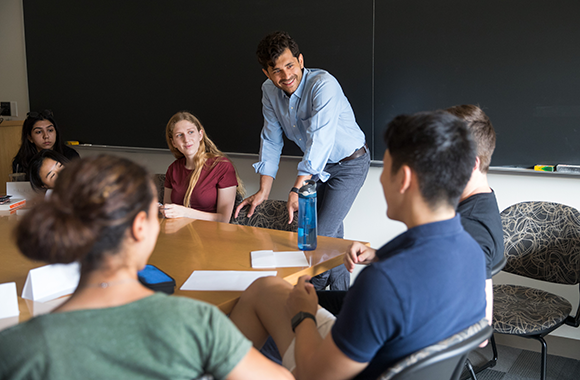 “Watson faculty are very highly qualified, so they can always answer questions about the latest debates in their field. But at the same time, they are nourished by the active working-out of a younger scholar's argument."

Nick Ziegler, concluding his second year as director of the Watson Postdoctoral Fellowship Program, uses one word to describe the eight fellows who are leaving: “fantastic.”

It’s also that they worked so well with and for each other. “They generated a remarkable degree of cohesion, a mutually supportive culture, despite the real differences in their disciplines,” he says.

For example, in addition to engaging in the program’s formal components – monthly Works in Progress gatherings, practice job talks, and publication workshops – the fellows developed an informal writing group, and in some cases invited their partners, if they were academics, to participate in the life of the program. “While Watson can provide the enabling conditions for that kind of small group culture and cohesion, only the fellows themselves can provide the catalyst for making that happen.”

“It was great to be part of an inter-disciplinary cohort,” says historian Anthony Pratcher. “My program colleagues pushed my thinking in directions I had not expected. I’m a better scholar because of it.”

Re-launched in 2013, Watson’s program, which has supported 28 fellows to date, aims to nurture the work of young, high-potential social scientists and to “catapult” them into successful academic careers. “We try to protect them from short-term demands of working on research agendas other than their own,” says Ziegler, by providing what sociologist Rawan Arar calls “the time and space” to do their work.

According to sociologist Adaner Usmani, “Watson afforded me the mix of guidance from others and time to myself that I needed to be ready for the next stage of academic life. I was thus able to make the most of two years of research.

While the program is all about supporting the fellows, Watson gains as well, Ziegler says. “Watson faculty are very highly qualified, so they can always answer questions about the latest debates in their field. But at the same time, they are nourished by the active working-out of a younger scholar's argument. There's nothing quite like seeing articles or book manuscripts being revised, redesigned, and critiqued in real time.”

For undergraduates and for the fellows, teaching, too, is a win-win situation. “I learned an enormous amount from the whip-smart students I taught,” says Usmani. “I leave not just a better teacher and communicator as a result, but also a better academic.”

“The upshot,” according to Ziegler, “is these fellows have secured a terrific set of career options. Their work represents one of the Watson Institute’s many important contributions to knowledge advancement.”

Below is a list of who these fellows are and where they’re going.