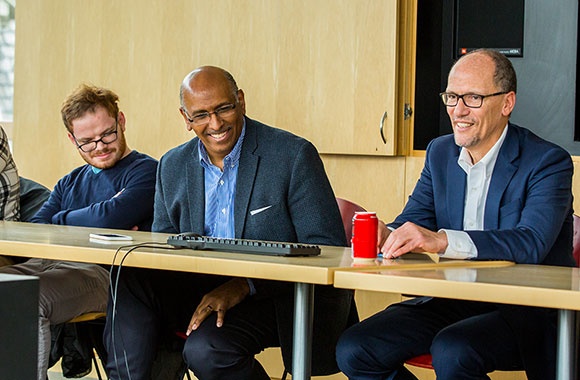 In today’s turbulent times, the journey to form a more perfect union often appears as difficult as ever. The “shortest distance theory” is seldom part of the playbook of progress in Washington, D.C. and elsewhere. A host of factors have created a political atmosphere of hyper-partisanship in which effective governance is elusive, and principled compromise is frequently derided as a four-letter word. As a result, public confidence in our political institutions, especially at the federal level, is at a low ebb. I have had the privilege throughout nearly three decades of public service to work in all three branches of the federal government, as well as in state and local government. I have run for office, and have experienced success as well as setbacks. My education at Brown laid an important academic and ethical foundation for my future work. At the same time, as a student, I had a strong feeling that there was often a wide gap between what I was learning in the classroom, and how things actually got done in the real world.

To paraphrase Friedrich Nietzsche, madness is rare in individuals - but in parties it is the rule. From the very founding of our American political system, we have been less than sane when it comes to our politics and political parties. But what makes the madness different today? And why does it feel so personal? How does political activism and the rise of grassroots movements such as Tea Party, Occupy Wall Street and even “Trumpism” create pathway for a “third way” as the dominant political parties try to hold on to voters and rebrand themselves?

We’ll take a look at both the madness and the methods of our political parties in the fight for domination and electoral success; and ultimately how the emergence of Donald Trump and Bernie Sanders may signal not just a profound transformation of both political parties but their eventual end.

A multidisciplinary exploration into the growing mistrust of mainstream media, increasingly siloed sources of information, and disagreement about fundamental facts.

This study group will examine media controversies, while considering the cognitive processes by which the brain develops and maintains belief systems, even in the face of contrary evidence. Featuring guest lectures from practitioners of objective reporting, opinion journalism, and partisan rhetoric; as well as from Professor Steven Sloman from the Department of Cognitive, Linguistic, and Psychological Sciences.