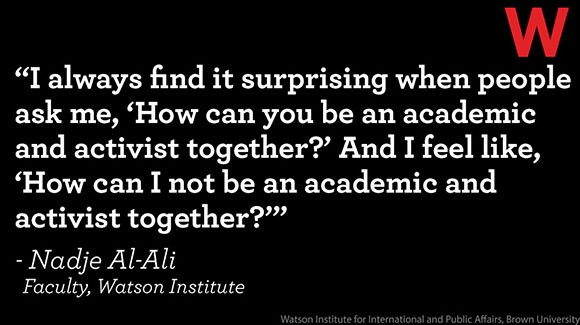 It’s Complicated: How Women, Islam, and the State Intersect

In 1991, the publication of Women, Islam, and the State changed how we study the position of women in Muslim societies. Edited by Deniz Kandiyoti, an expert in gender and developmental politics, the book challenged the prevailing narrative that the only two forces operating on women in Muslim-majority countries states were culture and religion. To fully understand their position, she argued, it’s also necessary to consider the role of the state.

Anthropologist Nadje Al-Ali, the Robert Family Professor of International Studies at the Watson Institute, agrees. “Mainstream political scientists and international relations scholars think about women and gender as side issues to the big questions of political transition, democracy, authoritarianism,” she says. “But when you look at what's been unfolding…in terms of protest movements in the region, you don't need to be an academic to see that [gender] has been a central component of challenging previous regimes – as well as a central component of regimes trying to control their populations.”

Al-Ali recently co-edited a book with Kandiyoti and Kathryn Spellman Poots, a visiting research scholar in Columbia University’s Middle East Institute. Gender, Islam and Governance presents nine case studies that examine how not only imperialism and neoliberalism affect gender issues, but how politics at the state and local levels, too, play a role.

To learn more about her work, listen to Al-Ali on this episode of Trending Globally. This November, you can also see Al-Ali and her coeditors discuss their book at the Watson Institute.