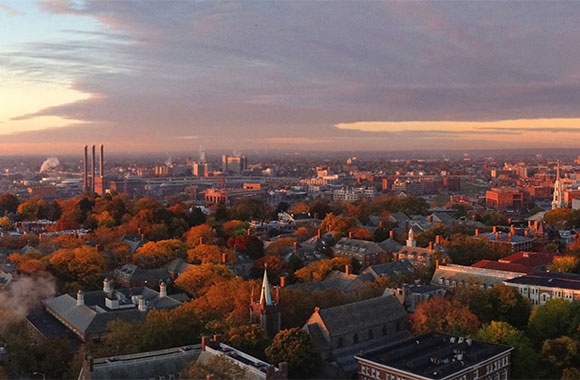 Climate change can’t be solved by climate experts alone. We need experts on development, gender, finance. Facilitating conversations like these is a particular strength of the Watson Institute.

The Climate Solutions Initiative will focus on overcoming barriers to confronting climate change, through scholarship, learning and research-informed infrastructure changes on campus, in Providence and beyond.

PROVIDENCE, R.I. [Brown University] — One of the greatest obstacles the world faces in the fight against climate change is inertia — the force that maintains the status quo and inhibits individuals and societies from making the most impactful changes that could mitigate the effects of climate change on a large scale.

“There are many well-meaning people who understand how our future will be negatively impacted if we don’t take radical action, but who don’t take the actions that are required,” said Stephen Porder, assistant provost for sustainability at Brown University. “That’s because the world we live in isn’t set up to combat climate change.”

For example, homeowners might be interested in heating and cooling their homes more sustainably with an air-source heat pump — but they may have difficulty finding technicians who can do the job. On a global scale, leaders of many nations may believe in the urgency of taxing carbon emissions but face the reality that a carbon tax may negatively affect their trade relationships.

A new initiative at Brown will launch a series of efforts focused on overcoming climate inertia, with the ultimate goal of inspiring universities, cities, regions and international governing bodies to take action to halt and reverse the effects of climate change.

The Climate Solutions Initiative, a three-year undertaking managed by University leaders, the Office of the Provost, the Watson Institute for International and Public Affairs and the Institute at Brown for Environment and Society (IBES), aims to curb climate inaction locally and globally through scholarship, learning and research-informed infrastructure changes. It will also establish a Climate Solutions Lab, housed at the Watson Institute, that will harness Brown’s faculty expertise on energy, trade and finance to create public-facing policy analyses and offer courses on climate policy and finance, training the next generation of climate action leaders.

The initiative will not only leverage Brown’s reputation for high-impact research on climate change, said University President Christina H. Paxson, but is also a natural extension of Brown’s ambitious plans for decarbonization on its own campus. In the last two years, the University has committed to reaching net-zero greenhouse gas emissions by 2040, selling all of its financial investments in companies that extract fossil fuels, and supporting student and faculty efforts to push for a Rhode Island climate-resiliency plan.

“With our bold commitments to reducing our on-campus carbon footprint and advocating for climate action in our home state, Brown has already established itself as a leader in addressing a defining challenge of the 21st century,” Paxson said. “This exciting initiative harnesses our momentum toward net-zero greenhouse gas emissions, our extensive faculty brainpower and our partnerships with communities beyond Brown to inspire concrete actions that could halt or even reverse the catastrophic effects of climate change.”

Porder said that while there are many barriers to finding climate solutions, inertia is one crucial obstacle that doesn’t receive the attention it deserves. The Climate Solutions Initiative will work to remove barriers to climate action where possible by convening conversations between experts and stakeholders, sharing lessons learned with other universities, cities and states, and engaging students in research and advocacy.

“Current students at Brown have lived their entire lives being told their futures are uncertain, or even doomed, because of climate change,” Porder said. “At Brown, there’s no shortage of research and courses that convey the seriousness of the problem. This initiative will focus on new ways to teach about and seek real solutions.”

The first scale will build on Brown’s considerable work toward decarbonizing its own campus to create a living laboratory that offers guidance to other universities.

Efforts to reduce greenhouse gas emissions at Brown began more than a decade ago, when University leaders committed in 2007 to nearly halving annual emissions levels. Based on a conversion of Brown’s central heating plant from oil to natural gas, a thermal efficiency upgrade that enables the plant to circulate hot water instead of steam, and a variety of other campus energy efficiency projects, Brown is now approaching that goal.

In 2019, the University established four phases of achievable actions that include a series of immediate steps that will enable it to cut emissions by 20% to 30% by 2025 and to reach net-zero greenhouse gas emissions by 2040. The net-zero plan’s first phase — two renewable energy agreements with providers of solar and wind power to offset 100% of Brown’s on-campus electricity use — is already in motion, with the Mesquite Farm wind farm in Texas up and running as of June 2020 and offsetting about 30% of on-campus electricity use.

Porder said more than 600 higher education institutions across the country have made similar pledges to reach carbon neutrality in the coming decades, but they may face a long, tough road ahead. The Climate Solutions Initiative’s first stage will offer lessons learned by Brown leaders to catalyze change at other colleges and universities, which together emit roughly the same amount of greenhouse gases as the power generation sector in the state of New Jersey. Spurring universities to reduce their carbon footprints could also impact their surrounding communities, Porder said, given that schools are often viewed as thought leaders.

“The same barriers to climate action exist on every campus,” Porder said. “Now that Brown has overcome some of the biggest barriers to reducing its emissions and is on target to reach net-zero by 2040, we want to share the important lessons we have learned about collaboration between administrators, faculty, students and staff, which is necessary to overcome the institutional inertia that too often precludes rapid change.”

Porder said that as part of the initiative, Brown expects to convene a conference of presidents, provosts, key faculty and facilities managers from colleges and universities across the country to work toward a larger movement for decarbonization in higher education. Porder also plans to teach a course that explores inertia and climate change solutions through the lenses of multiple fields of study. The course may later become available to students globally via an online platform nationwide, he added.

“An engineer, sociologist and political scientist may all see different obstacles in facing the climate challenge,” Porder said. “Bringing those perspectives to students will provide a chance for them to explore the solutions from a multitude of angles.”

The second scale of the initiative will investigate barriers to climate reform in Providence, particularly with respect to heating and transportation. Porder and other initiative leaders hope to work with city administrators, utility companies and clean energy experts to find opportunities to reduce emissions from heating, air conditioning, lighting, vehicles and more. That work would complement existing climate-focused partnerships among University, city and state stakeholders — including the Providence Resilience Partnership, a coalition of organizations led in part by IBES Professor of the Practice Curt Spalding and formed in 2019 to address the imminent threat of rising sea levels in the Providence area.

“Overcoming inertia is no small task, and we hope to work with our neighbors and our larger community to find greener solutions that are politically and technologically feasible,” Porder said. “With decisive changes now, Providence has a chance to become a sustainability leader whose actions other American cities can emulate."

Roberts, also an IBES-affiliated professor, will lead efforts to tackle the third scale, the New England region. For several years, findings from research fellows, undergraduates and graduate students within Roberts’ Climate and Development Lab have exposed the many ways in which they say utility companies in three New England states defend the status quo and slow the pace of efforts to confront climate change. Roberts plans to expand his lab’s research to every state in the region, improving understanding of the main barriers to change, convening stakeholders across the spectrum of interests, and building capacity in each state to re-balance the scales.

Thanks to two renewable energy agreements with providers of solar and wind power, Brown is headed oward offsetting 100% of its on-campus electricity use. The University is currently working with a Providence developer and leading energy provider to transform a former North Kingstown gravel pit into a solar facility. Photo: Stephen Crocker/Brown University

To target the fourth scale, global trade, the Watson Institute has established a new Climate Solutions Lab, which will call on the institute’s faculty experts on climate-adjacent subjects such as energy, trade, finance and international development to launch new courses, research and discussions — some of which may ultimately influence public opinion and sway policymakers.

Colgan explained that policy proposals seeking to halt climate change, such as carbon taxes or a cap-and-trade policies, face resistance because leaders worry they could hamper economic growth and employment.

“As a world, we have some work to do to modify the policies at the World Trade Organization to make sure they are not inhibiting progress on climate change,” Colgan said. “But that’s not going to be simple, and we can’t change that with scholarship alone. We need to start conversations between social science scholars, policymakers, activists and climate scientists.”

According to Colgan, the Watson Institute is the ideal place for those conversations. It is home to senior fellows such as former World Bank president Jim Yong Kim and former U.S. Sen. Heidi Heitkamp, who frequently lend their expertise in public discussions and work with students in seminars; it hosts groundbreaking talks between leaders who have different but complementary expertise; and it is home to countless renowned faculty whose scholarship often sparks discussion in Congress and leads to real change.

“Climate change can’t be solved by climate experts alone,” Colgan said. “We need experts on development, gender, finance. We need people who can take a look at climate scientists’ wish lists and say, ‘Hang on, we can’t just focus on these goals. We also need to reduce poverty and address systemic inequalities.’ In those conversations, at first you face tough tradeoffs. But then you start to find solutions that will address multiple problems at once. Facilitating conversations like these is a particular strength of the Watson Institute.”

As part of the lab, Colgan is teaching a Fall 2020 course titled Politics of Climate Change, which will arm potential climate advocates at Brown with knowledge on the political forces obstructing climate action and the social movements, institutions and economic interests that shape the response to climate change.

Colgan is also calling on his colleagues within the institute to devote time this year to exploring solutions to climate change through the lens of their expertise, whether through research, teaching, talks or commentary. Already, he said, a handful of affiliated faculty have signed on, including Senior Fellow Deborah Gordon, who works on global oil and climate change issues; Center for Latin American and Caribbean Studies Director Patsy Lewis, who has studied the effect of natural disasters on the development of island nations; and Rhodes Center for International Economics and Finance Director Mark Blyth, who has weighed in on the economic and political feasibility of a Green New Deal in the U.S.

Colgan himself made the first contribution, arguing in a recent Foreign Affairs piece that severing trade links between the U.S. and China would make it impossible to save the environment. Both Colgan and Porder said they believe this is just the beginning of faculty and student involvement in the initiative.

“Sustainability is something we need to work toward together — as a campus, as a city and state, as a country and world — and my hope is that more and more people join us from across campus as we build this living lab,” Porder said. “Compared with where we need to go, we’ve only dipped the first toe in the water.”

Visit the link below for more on the Climate Solutions Lab.