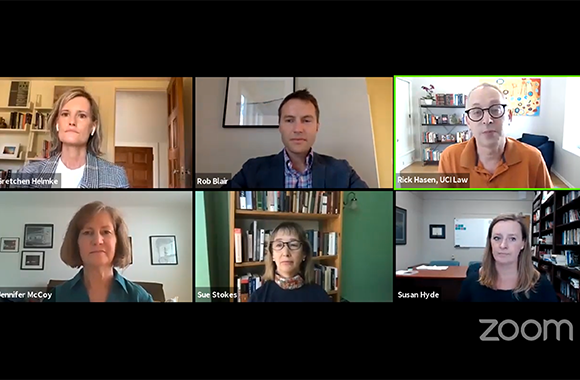 Seminar Compares Erosion of Democratic Norms Around the World

The live-streamed panel discussion Voting & Electoral Manipulation was held a few days after President Donald Trump repeatedly proclaimed that he wouldn’t commit to a peaceful transfer of power if he were to lose the election. During the discussion, hosted by the Democratic Erosion Consortium, panelist Susan Stokes, the director of the Chicago Center on Democracy at the University of Chicago, warned, “We are observing the sabotaging of the election in real time … our democracy is in grave danger.”

The genesis of the Democratic Erosion Consortium, which Professor of Political Science and International and Public Affairs Rob Blair directs, was the 2016 presidential election. Then, Blair, whose expertise centers on security institutions in developing countries, realized he felt ill-equipped to understand whether Donald Trump’s win was a risk to democracy, as so many pundits asserted. In a phone interview before the live-streamed panel discussion, Blair said, “I didn’t have the analytical tools to understand whether all those warnings were valid. I wanted to better understand this very unusual political moment. Colleagues at other institutions felt similarly.”

Blair’s efforts to build interest through word-of-mouth, emails, and blog posts paid off. With additional help from research assistants at Brown, Blair and a group of faculty from around the country collaboratively developed the Democratic Erosion seminar syllabus. Every summer, revisions are made based on faculty feedback; before the 2019-20 academic year, the syllabus was significantly overhauled, said Blair.

With no financial commitment from participating academic institutions, barriers are quite low to join the Democratic Erosion Consortium. With financial support from the Hewlett Foundation and other donors, the consortium has grown to include more than 50 academic institutions where faculty teach the seminar. With participating institutions in the United States, England, Philippines, South Korea, Israel, Romania, Turkey, and Australia, among others, Blair believes that such widespread cross-collaboration is novel.

Although the 2016 election was the catalyst for the eventual creation of the Democratic Erosion Consortium’s seminars, Blair emphasized, “[Our focus] is not just on American politics. It’s about democratic erosion as a global phenomenon.” First taught in the fall of 2017 at Brown, the seminar’s comparative analysis enables students, who may be worried about U.S. democracy, to identify and analyze parallels and differences between the United States and such nations as Poland, Brazil, and Venezuela. “It’s a testament to the fact that we are not alone in worrying about the quality of our democracy,” said Blair. “Democratic erosion is a global phenomenon.”

The seminar is not a “Bashing Trump 101” course, Blair said. The 13-week syllabus’s readings include, among other topics:
-Definitions and theories of democratic erosions;
-Using democratic institutions to undermine democracy;
-Populism and demagoguery;
-Disinformation and fake news;
-Corruption and money in politics; and
-Civil society and social movements.

According to Blair, the country-specific case studies that seminar students research feed into something more ambitious than a final paper for an audience of one professor. Led by Jessica Gottlieb, an associate professor of international affairs at Texas A&M’s Bush School of Government, graduate students there use the case studies to develop quantitative and analytical data. This Democratic Erosion Event Dataset (DEED) was developed in collaboration with USAID’s Center for Excellence in Democracy Human Rights and Governance, and is available to students, scholars, and policymakers worldwide.

“Some people call [voter suppression efforts] the new Jim Crow. It’s a lot like the old Jim Crow,” said Hasen at the recent panel. “The best way for people to feel the election is legitimate is to actually hold a legitimate election.”