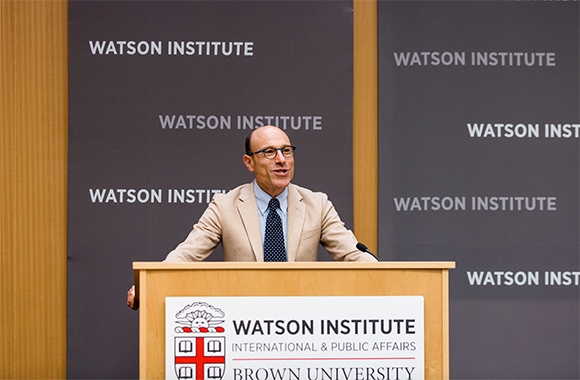 In a letter to the community this morning, Brown University President Christina Paxson and Provost Richard Locke announced the reappointment of Edward S. Steinfeld as the Howard R. Swearer Director of the Thomas J. Watson Institute for International and Public Affairs. Provost Locke lauded the Institute’s significant progress during Ed’s first term, citing his leadership in expanding the Watson faculty, launching a new undergraduate concentration, strengthening the Master of Public Affairs program, overseeing the creation and construction of Stephen Robert Hall, and raising the Institute’s profile, visibility, and influence in the world.

Citing the importance of the Institute’s work, they wrote, "Since his initial appointment in 2015, Ed has led the Institute with great esteem, achieving increasing levels of accomplishment and impact. Through his continued vision, direction and stewardship, the Watson Institute will advance its mission at a time when its work is so sorely needed, and contribute to creating more just, peaceful and prosperous societies locally and globally through exceptional teaching, research and engagement."

READ The LETTER TO THE BROWN COMMUNITY