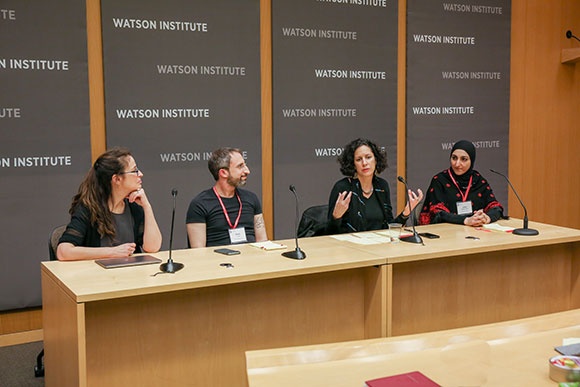 "I think this is one of these spaces where we can actually engage with the other side and learn. To create a better world, we need dialogue."

Facing Complexity and Controversy in Film

Conference brings together Israeli and Palestinian academics and filmmakers

The Watson Institute recently hosted an unusual, and perhaps unprecedented, gathering of eminent scholars and practitioners in Israeli and Palestinian film. The two-day conference, titled “Gender in Israeli and Palestinian Film,” was organized by Katharina Galor, Hirschfeld Visiting Assistant Professor in Brown’s Program in Judaic Studies, in collaboration with Najat Abdulhaq, a Berlin-based Palestinian scholar. Middle East Studies was a co-sponsor.

Through papers, presentations, film screenings, and panels, participants explored the (arguably equally) sensitive issues of gender and Israel and Palestine. Discussions drew not just from the field of gender studies, but from a variety of disciplines, including media and cultural studies, postcolonial theory, post feminism, and queer theory.

To study one without studying the other, the organizers say, is tantamount to succumbing to artificial boundaries. “Najat and I both feel that you can't really have a serious academic discussion of Israeli film without engaging Palestinian film, and vice versa,” says Galor.

That said, the organizers made a point of foregrounding the inherent asymmetries in the Israel-Palestine relationship. Galor, in her introductory remarks, explained, "We do think it is important to stress the repercussions of the political context on cinema as an aesthetic art form, as a social and cultural medium, as a means to reflect individual, collective, or national identities, as an educational forum, as a tool of shaping public opinion and consciousness, as a commercial product and economic stimulator, or as an instrument to enhance social and political change, resistance, or revolution." Highlighting those "stark structural inequalities" is what made it possible for many of those invited to attend and participate, according to anthropologist Nadje Al-Ali, the Robert Family Professor of International Studies at Watson and a conference panelist.

In addition to the financial and political contexts and challenges of filmmaking in the region, attendees also learned about gender dynamics within the industry. Many were surprised to discover, for example, that while 5 percent of American films and 12 percent of European films are directed by women, in the Middle East, that number is 26 percent. And in Palestine? Fifty percent.

But the issue is not one of “just add women and stir,” according to Al-Ali. It’s about depicting the complexities and nuances of real life. Al-Ali praised the Palestinian domestic drama Personal Affairs, for example, for portraying “universal humans embedded in a national allegory” and for not allowing “dogma to outweigh human relations.”

The conference’s 10 invited scholars and practitioners included former Watson Postdoctoral Fellow Sa’ed Atshan, now assistant professor of peace and conflict studies at Swarthmore College. Having traveled to Brown from as near as Boston and as far away as the Middle East, they were unanimous in declaring the event a success. Rami Younis, a Palestinian writer and activist who is a religion, conflict and peace initiative fellow in Harvard Divinity School’s Religious Literacy Project, described it as “challenging, stimulating, and inspiring.”

“I have learned so much, from critical and creative perspectives alike,” said Anna Ball, associate professor of postcolonial feminisms, literatures and cultures at Nottingham Trent University in the United Kingdom, declaring the event “hospitable and daring.”

“I think this is one of these spaces where we can actually engage with the other side and learn,” says Galor. “To create a better world, we need dialogue.”