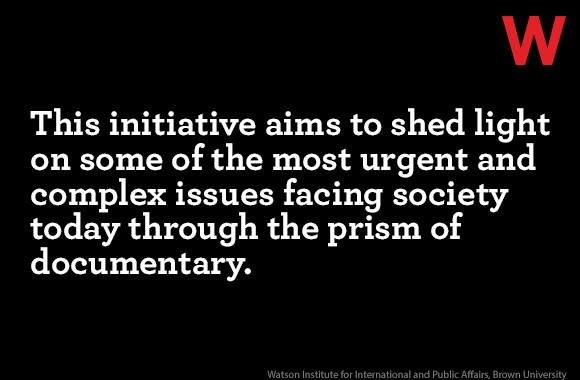 The John F. Kennedy Jr. Initiative for Documentary Film and Social Progress reflects the values of its namesake, a Brown alumnus who throughout his adult life was committed to the quest for truth and social progress through the creative use of imagery and narrative. In the mid-’90s, Kennedy co-founded George, a magazine covering contemporary politics. The monthly is credited with pioneering many practices that are now standard in print and digital media coverage of international current events.

The initiative will focus on both traditional and innovative modes of storytelling, and, in the process, create dynamic correspondence between filmmakers, journalists, and students.

“This initiative builds on the strong student- and faculty-driven film festivals on campus,” said Poster. “Our vision is to create substantive engagement – academic programming with partners across the University – as well as access to the premier practitioners of documentary film and bring them to Brown to open direct dialogue with the community.”

Among the renowned practitioners will be Fredrick Wiseman, widely considered the “dean” of American documentary film. In April, following the screening of a selection of his films, Wiseman will deliver the John F. Kennedy Jr. Distinguished Lecture.

Though starting with screenings and lectures in its first stage, the initiative aims to foster course offerings designed in collaboration with various entities on campus, including the Brown Arts Initiative, the Department of Modern Culture and Media, and beyond. The seeds of such collaborations are being planted early. For example, the screening of The Edge of Democracy, which focuses on the fragile state of the Brazilian body politic, will feature participation by the Brazil Initiative, while the screening of Black Woodstock, which explores the August 1969 Harlem Cultural Festival, will be cosponsored by the Center for the Study of Race and Ethnicity in America and the Department of Africana Studies.

It’s hoped that the initiative will eventually offer professorships and fellowships as well.

The Watson Institute, says its director, Edward Steinfeld, is a natural home for a series about investigative reporting and visual storytelling. “While we are anchored in the social sciences,” he says, “we believe that there are many paths to truth, and many different ways by which that truth, through the richness of human creativity, can be expressed to mobilize awareness and action.”

“We hope this initiative will attract a broad audience of students who are interested in different modes of rendering truth," said journalist Stephen Kinzer, a senior fellow at Watson. "Brown students and alumni have a long history of engaging in storytelling, whether in writing, producing, or acting, and access to these masters can only serve to elevate their impact."

Launching in January 2020, the initiative has events scheduled throughout the calendar year. The first is a January 28 screening of Coup 53. The 2019 film, directed by Taghi Amirani and edited and co-written by Academy Award-winning editor and sound designer Walter Murch, depicts the combined efforts of the United Kingdom and the United States to overthrow the democratically elected government of Iranian Prime Minister Mohammad Mosaddegh. The screening will be followed by a panel discussion with the filmmakers and Kinzer, who is interviewed in the film.

In February, Emily Kassie ’14 will hold a screening and master class. Kassie is an Emmy-nominated filmmaker, photographer, and investigative journalist who has created award-winning works for the New York Times, NBC, Huffington Post, Highline, and more.

In March, the inaugural John F. Kennedy Jr. Film Forum will launch with the theme “Democracy in Peril.” The forum will begin with a screening of three contemporary documentaries: The Edge of Democracy, directed by Petra Costa; The Kingmaker, directed by Lauren Greenfield; and The Great Hack, produced by Geralyn Dreyfous, who also founded the documentary film fund Impact Partners. The forum will culminate in a moderated discussion among the three filmmakers, all of whom will be on campus to celebrate the new initiative and promote film-related scholarship across the University.

In addition to Wiseman’s lecture, April will feature a screening and discussion of Where’s My Roy Cohn? by documentarian Matt Tyrnauer, director of the 2018 Studio 54 and a past editor-at-large and special correspondent for Vanity Fair, who will discuss his process and methodology in tackling such explosive, cultural subject matter.

Rory Kennedy ’91, director of numerous documentaries, including Ghosts of Abu Ghraib and Last Days in Vietnam, will screen her most recent film, Above and Beyond, about NASA and climate change, and offer a master class.

Looking to the Fall

In the fall, Davis Guggenheim ’86, director of the documentaries An Inconvenient Truth, Waiting for Superman, and He Named Me Malala, will offer a screening and master class.

Oscar-winning Errol Morris, director of The Thin Blue Line and The Fog of War, will screen and discuss American Dharma, his controversial portrait of Steve Bannon.

Richard Linklater will kick off the second John F. Kennedy Jr. Film Forum, themed “Pursuing Truth through Fiction.” Following screenings of his films Slacker, Dazed and Confused, and Boyhood, Linklater, named among TIME magazine’s 100 most influential people in 2015, will discuss modes of storytelling and offer a master class.

Next, producer Christine Vachon ’83 will screen Boys Don’t Cry, as well as two of the many films she has worked on with director Todd Haynes ’83: Velvet Goldmine and Dark Waters, from 2019.

“That we can bring such amazing world-class talent to Brown is a testament to John F. Kennedy Jr.’s life, and to how much people want to honor him,” said Steinfeld. “We want this initiative to continue his legacy.”

To learn more about The John F. Kennedy Jr. Initiative for Documentary Film and Social Progress, and for up-to-date announcements and event details, visit the initiative’s webpage.