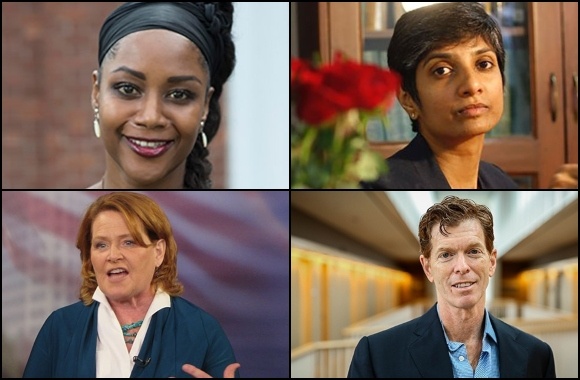 “Watson’s senior fellows are committed to challenging Brown students to think critically and independently, and apply their discoveries in and out of the classroom. Our students benefit from the expertise these lawmakers, writers and lawyers, bring to the classroom and we are thrilled to welcome our newest cohort.”

The Watson Institute for International and Public Affairs will welcome four new senior fellows in the spring 2020 semester. A former U.S. Senator, an acclaimed writer on race in America, an internationally respected human rights attorney, and a legal expert with Wall Street and government experience will engage with students, faculty, and visitors, sharing insight and knowledge gained from years of experience in their respective fields.

Former U.S. Senator Heidi Heitkamp, author ZZ Packer, and Senior Advocate at the Supreme Court of India Menaka Guruswamy will each devise a study group for students built on a theme of her choice, while Ari Gabinet will teach in the Institute’s new International and Public Affairs undergraduate concentration. This new cohort joins a returning group of prestigious senior fellows, including Former Republican National Committee Chair Michael Steele who will once again lead a study group, and others hosting events, mentoring students, and teaching courses.

Announcing the appointments, Watson Institute Director Edward Steinfeld said, “Watson’s senior fellows are committed to challenging Brown students to think critically and independently, and apply their discoveries in and out of the classroom. Our students benefit from the expertise these lawmakers, writers, and lawyers, bring to the classroom and we are thrilled to welcome our newest cohort.”

Building on his distinguished career as a general counsel for leading global financial institutions and a regulator in the U.S. Securities and Exchange Commission, Ari Gabinet will offer students unparalleled insights into the interaction between business organizations and the surrounding legal and regulatory environment. Gabinet will continue teaching his successful “Law and Public Policy” course, now housed at Watson, and offer a new course that will focus on analytical thinking and writing with respect to issues of law and regulation.

Menaka Guruswamy, a Senior Advocate at the Supreme Court of India, is a constitutional rights litigator and scholar. Among other cases, Guruswamy was one of the lead lawyers in the recent Supreme Court case to overturn the Indian law banning homosexuality, for which she was named one of TIME magazine’s 100 most influential people of 2019. Jointly appointed by the Center for Contemporary South Asia at Watson, Guruswamy will engage with faculty and students on the complex issues of law, human rights, and advocacy, and will lead a study group, titled the “U.S., India, and Iran: Current Issues of Constitutional Crisis and Political Division,” later in the Spring.

Senator Heidi Heitkamp served in the U.S. Senate from 2013 to 2019, the first female senator to be elected from the state of North Dakota. She also served extensively in state-level government as the state’s tax commissioner and attorney general and, most recently, founded the One Country Project, an organization focused on addressing the needs and concerns of rural America. Senator Heitkamp will lead a study group, titled “How to Influence America's Future,” that will push students to ask complex questions about America’s global status and America’s position on global issues like climate change. She will bring to the conversation a deep understanding of politics in a state that voted for Donald Trump by a margin of roughly 30 percentage points.

ZZ Packer, a fiction and non-fiction writer whose work examines the long-term societal impacts of race in America, will lead a study group titled “The 1619 Project: Governing Narratives.”  A recent contributor to the New York Times 1619 Project, a journalistic effort to re-examine the legacy of slavery in the United States, Packer will engage students in the exploration of how certain political, historical and sociological narratives inform an American ethos and construct an American identity—sometimes at the expense of competing narratives. Packer’s stories have appeared in the New Yorker, Harper’s, and 100 Years of the Best American Short Stories published in 2016. Her non-fiction has appeared in the New York Times Magazine, the Washington Post Magazine, the New York Times Book Review, and the Guardian.

Participants in the study groups will not receive course credit, although there will be suggested readings, informal lunches, and office hours. Students are expected to attend the entire series of meetings. More details regarding application deadlines and meeting times will be posted soon.