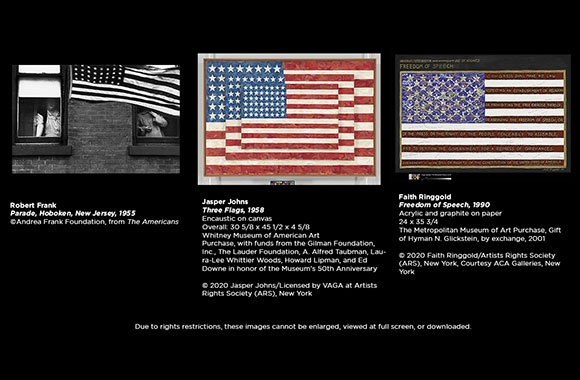 The devastating pandemic, widespread protests, raging forest fires, a tattered economy, and a divisive presidential election: It’s no wonder Americans’ nerves are frayed. It’s the perfect time for "Out of the Fray," the new virtual art exhibition at the Watson Institute. Curated by Judith Tolnick Champa '79 MA (History of Art), the exhibition features the works of 12 contemporary visual artists and includes single iconic works by so-called "progenitor" artists – the late Robert Frank, and Jasper Johns and Faith Ringgold – whose interpretations of flags as artistic political statements have inspired countless artists.

The artists’ bold representations of the American flag are stunning and thought-provoking: While Liz Collins and Gary Graham used the American flag to create "Pride Dress," Barbara Kruger’s 30 x191-foot mural, "Untitled (Questions)," that the Museum of Contemporary Art in Los Angeles commissioned in 1990, was reinstalled there in 2018. The mural questions include: "Who is bought and sold?" "Who follows orders? Who prays loudest?" Dave Cole ‘00 used bullets and bullet fragments to create "American Flag (Bullets)." In his artist’s statement, Cole wrote, "There is something immensely satisfying in how every little piece is beautiful. And yet, every element has been fired from a gun and recovered; each is a very real act of potentially deadly violence. This juxtaposition – beauty and brutality, creativity and violence – comes up again and again for me."

A diverse array of artists – from internationally known names such as Kruger and Ed Schlossberg to Vanessa Leroy, a rising young photographer studying at MassArt – incorporate flag messages through textiles, video, photography, and other media. Elizabeth Duffy’s "Unraveling: Suit with Lapel Pin," featuring a flag stitched to resemble an unraveling lapel pin, and Tasha Dougé’s video, "The Rhode to Brown," describing the role of Brown University and Rhode Island in the African slave trade, were developed for this show.

A member of the Art at Watson Committee and former Bell Gallery curator, Tolnick Champa was inspired to organize an exhibition depicting the American flag as a political, cultural or social justice symbol after she had witnessed and collected numerous photographic images of flags and protests over recent years. From a call for unity for Black Lives Matter and other social justice advocates to a "love it or leave it" symbol for right-wing conservatives to a full-throated display of patriotism at Fourth of July parades, the flag contains myriad interpretations.

"The American flag is ‘big’ right now; it’s fraught and it’s frayed, yet no artist lightly undertakes reimaging the flag," explained Tolnick Champa, who sees Watson as the proper venue for the exhibition, given the institute’s mission to promote a just and peaceful world. "As an alternative space – not a museum and not a gallery – Watson ensures art appears in a place of teaching, learning, and questioning," she said. "And, in addition to having a permanent collection, Watson can respond to the immediacy of the world and today’s urgent challenges."

"This exhibition is really fantastic; I love it," Edward S. Steinfeld, Director of the Watson Institute and Professor of Political Science, said. "I hope that a broad audience accesses these works and the excellent commentary; it’s all very thought-provoking."

Tolnick Champa’s plans to host a voter registration drive alongside a projected physical presentation were quashed, when the pandemic eliminated large in-person events. Logistical and technical support from Associate Director Steven Bloomfield and John Mazza, web and multimedia production manager, respectively, provided invaluable assistance and expertise in bringing the exhibition to virtual fruition. The pandemic aside, Tolnick Champa hopes the exhibition might be used productively in an academic setting, with a program inviting the artists to converse with faculty and students, for example.

"This exhibition – which runs through Jan. 31 – is a high point for us. Judith gathered works from some of the most exciting contemporary artists working today under the inspiration of Frank, Johns and Ringgold," explained Sarah Baldwin, host of Watson’s Trending Globally podcast, and a member of the Art at Watson Committee. "She’s a specialist in contemporary art, and a remarkably skilled, astute, and sensitive art historian and curator."

Baldwin continued, "I think the Watson leadership appreciates how art and the humanities can express and interpret topics that social scientists are examining." Of the exhibition, Gayle Wells Mandle, an artist in her own right who earned an MFA from the Rhode Island School of Design, wrote Tolnick Champa, "[I] enjoyed seeing all the artists’ takes on the flag. It’s so perfect an exhibition for this risky political time in our country."