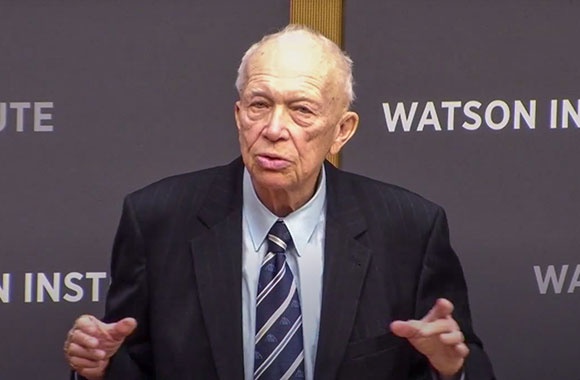 Sergei Khrushchev, a retired senior fellow at the Watson Institute, died June 18, at his Cranston home, at age 84. The son of former Soviet Premier Nikita Khrushchev, Sergei held several engineering degrees, including a doctorate from the Moscow Technical University, and was a rocket engineer and computer scientist who developed guidance systems for rockets and cruise missiles. He was also an expert on U.S.-Soviet relations from 1950 to 1964 and on the history of the Soviet space program. While at the Watson Institute, Sergei taught, lectured extensively around the country, and wrote three books about his father and the Cold War. Many of his former colleagues recalled Sergei’s sweet, gentle nature and sly sense of humor.

Between 1964 and 1989, Sergei could not travel outside the East Bloc, recalled James Blight, former research professor of international relations at the Watson Institute. Blight and his colleague and wife, janet Lang, former adjunct associate professor of international relations at Watson, met Sergei in Moscow in 1989. Blight, with help from Mark Garrison, founding director of the Center for Foreign Policy Development (CFPD), which became the Watson Institute, arranged in 1991 to bring Sergei to Brown for a one-year term. Sergei went on to serve as a senior fellow at the CFPD and eventually at Watson until his 2012 retirement.

“Sergei wrote extensively while he was at the Watson Institute, and several of his books, especially the memoirs about his father, will be invaluable for future historians,” said Garrison. “Nikita’s memoirs are basically the history of the Soviet Union and its ruling party from 1919, when Nikita served in the Red Army, until he was deposed in October 1964.”

“Sergei made it his life’s work to tell the real story … one not censored by the KGB or filtered by interpreters,” said Blight. After being deposed, Nikita walked and talked for hours with Sergei, who recorded his father’s memories. From those recordings, along with his daily experiences with his father, Sergei wrote Nikita Khrushchev and the Creation of a Super Power, a 752-page tome that contained detailed memories unique to Sergei. “He put you in the room where discussions happened,” said Lang. “If Sergei wasn’t there, he was listening to his father describe the secret meetings with senior advisors (whom Sergei knew well) – meetings to deploy nuclear missiles to Cuba, and to later withdraw them.” 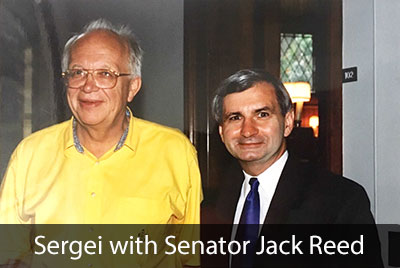 Having begun his research in the early 1980s, when access to Soviet archives on the Khrushchev period was unavailable, William Taubman (now Bertrand Snell Professor of Political Science, Emeritus, at Amherst College) faced formidable roadblocks in his work on Nikita Khrushchev’s biography. Fortunately, he met Sergei (and his second wife, Valentina), in 1990 and they introduced Taubman to Nikita’s former colleagues and traveled with him to places in Russia and Ukraine where Nikita was born, grew up and began his career in the Communist Party. Taubman’s book, Khrushchev: The Man and His Era won a 2004 Pulitzer Prize biography. Sergei challenged some of the book’s analyses, but according to Taubman he would say, “When I don’t agree with an author, instead of criticizing him or her in print, I should write my own book about the subject.” Nevertheless, on his speaking tours, when Sergei was asked his opinion of Taubman’s biography of Nikita Khrushchev, he would answer, “It’s the best book about my father – except for all my own books about him."

After Sergei wrote a book in Russian recounting his father’s last years, Taubman was asked to edit and translate the book into English. Like Nikita Khrushchev's own memoirs, this book, Khrushchev on Khrushchev – An Inside Account of the Man and His Era, by His Son, Sergei Khrushchev, included "all kinds of details which we had not known in the West,” said Taubman.

“So many of our fellow scholars around the world were able to put ourselves and our students into the Kremlin and into the Khrushchev family’s dacha, [vacation home] to vicariously experience what was happening during the most dangerous weekend of the Cuban Missile Crisis,” said Blight. Before Sergei published his volumes about his father, many accounts of U.S.-Soviet relations were abstract. Blight recalled one intimate and insightful vignette from Nikita Khrushchev and the Creation of a Super Power: Nikita eschewed his regular shot of vodka for a cup of lemon tea, because, Sergei explained, he knew the world could blow up in the next 24 hours and he wanted to be sober and thinking clearly.

When Sergei, Blight, and Lang led a Cuban Missile Crisis program for a Model U.N. with high school students (organized by Brown’s Choices Program), Lang said, “I represented former President John F. Kennedy, Jim represented former Cuban Prime Minister Fidel Castro, and Sergei represented his father. At the time, Sergei looked just like his father had in 1962. The students were looking at a living picture from their history books. A few students initially requested pictures with him; then a line of many dozen students … all excited to show their parents or grandparents. Sergei didn’t hesitate for a moment; he smiled for every picture.”

“Sergei was very instrumental to our group in planetary geosciences,” said James Head III, Watson Institute Senior Fellow and the Louis and Elizabeth Scherck Distinguished Professor of Geological Sciences (Research) in the Department of Earth, Environmental and Planetary Sciences at Brown University. A member of the Russian Academy of Sciences who has served as an investigator for both NASA and Russian space missions, Head said, “Sergei would come to our lab from time to time to talk about the Soviet, Russian, and U.S. space programs. I’d ask him questions so students could understand the history of the [U.S.-Russian] space race. He was so open and loved talking, with no holds barred, to both graduate and undergraduate students… they could really relate.” 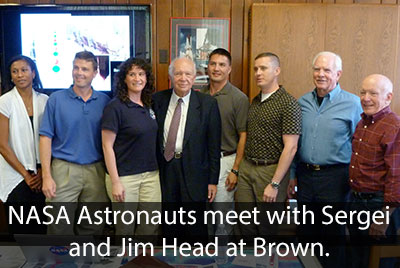 Head, who still trains NASA astronauts, brought members of the 20th class of astronauts to Brown to meet with Sergei, who shared his knowledge of the Soviet space program. “They were just knocked over,” said Head, who also teleconferenced Sergei into talks and meetings he conducted with scientists and astronauts in Houston. In those calls, Sergei provided insights about the Soviet and the current Russian space programs. “As a rocket scientist, he thought very analytically, but he was also so multidimensional in his thinking.”

After his U.S. citizenship ceremony in 1991, Sergei spoke with teachers at a summer program run by the Choices Program at Watson, and was always available to advise teachers working on issues related to his expertise. “He seemed to get so much joy from … bringing a piece of history to life for these teachers,” said Susan Graseck, Choices Program founder and a retired Watson senior fellow. “They were enlivened by this historical figure.”

Of an invitation to speak to the Woodstock Academy (where Graseck’s husband taught) and the Woodstock, CT, community, “Sergei said, ‘You can’t afford it and I am not allowed to do it for less [under my arrangement with the speakers’ bureau], but I’ll come for free.’ He spent the entire day at school, attending classes and eating lunch with students, and then gave a talk to the entire community,” Graseck said.

He bought the largest available Buick – reminiscent of what he’d seen on his trip to the United States in 1959 – and colleagues always watched from Watson’s windows as he struggled to park it in the small lot, recalled Blight. His frequent speaking engagements took him around the country, and he pinpointed each city he visited on a huge U.S. map in his office. When he met Susan Eisenhower, former President Dwight Eisenhower’s granddaughter, at the Eisenhower Library in Abilene, Kansas, Sergei felt that he’d truly arrived in the America he’d fantasized about, said Blight. According to James Head, Sergei also loved mac-and-cheese with lobster, a uniquely American culinary treat.

Twice voting for Barack Obama as president, Sergei predicted Donald Trump would win the election during the 2016 primaries, recalled Garrison. “In his old age,” he said, “Sergei became somewhat cynical about both [nations]. He thought the Russian influence [in the 2016 presidential election] was questionable, but he also wouldn’t put it past the Russians to interfere.”

“Sergei was a good friend; he was always interested … in how the past can inform you about the future,” said Head. At parties at the geologist’s home – where the basement bar was a focal point – people could find Sergei and Head drinking vodka and exchanging stories.