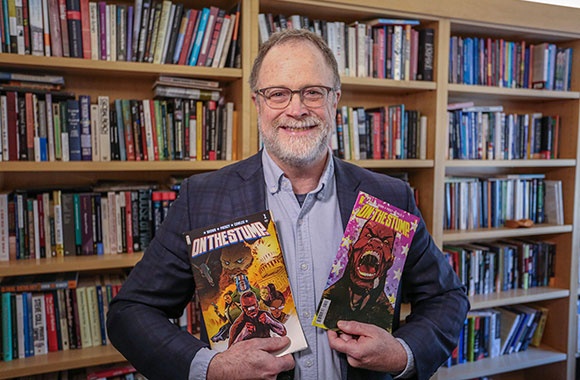 Professor of Sociology and International and Public Affairs Michael Kennedy, who relishes sharing his expertise through a variety of media, has contributed a thoughtful essay in a newly published comic book series, “On the Stump.” Kennedy, the first of five academics invited to write for this series, talks with the Watson Institute about the power and reach of 21st century comics.

WI: You’ve written extensively in academic outlets describing how studying super-heroes can influence our perspectives about politics, race, sexism and more. What inspired you to write an essay, Fighting Over America, which offers a dystopian interpretation of America under President Donald Trump, in the premier issue of “On the Stump?”

MK: I was quite honored to be asked by Julian Chambliss, Ph.D., professor and Val Berryman Curator of History at the MSU Museum at Michigan State University, and Chuck Brown, known in the comic book industry for having written for “The Black Panther” and ‘”Punisher” and for co-creating “Bitter Root,” one of my favorite, and the most cutting, comics I have ever read. Julian, who knows more about superheroes and American popular culture than anyone I know, and Chuck invited me to be the first of five academics to contribute to each of five issues that form the arc of “On the Stump.” For me, the only question was: “How fast could I write this essay?”

WI: This issue of “On the Stump” depicts a terrifying protagonist. Did you write the essay with that cover in mind?

MK: More than that; the comic’s pages are quite violent. The comic contains a message that we must recognize: I believe America is at risk, and democracy is at risk, not only of destroying an America understanding itself as democratic, but of plunging us into even more violence than we currently suffer. It’s a wake-up call.

This comic is particularly special because it’s an expression of Black speculative fiction, different from the superhero genre I normally address, but with the same sequential art form. I owe Julian big time; he has helped me appreciate how this tradition articulates the ways in which political norms are broken, justice for Black people, and thus all people, is regularly denied and Black people can imagine a better, more just, future. Such fiction is closer to a great dystopian novel like “Brave New World” than a superhero comic. Although this comic fits within the framework of Black speculative fiction, I am a 62-year-old white man contributing to it. I wish there were more folks like me who appreciate the genre, and get its politics. But as there apparently are too few, the invitation by Chuck and Julian honors me greatly.

WI: What do you hope to accomplish by publishing your essay in “On the Stump”?

MK: I write and contribute to public discussion in several ways, including op-eds, blogs, television shows, etc., to reach individuals who are not professional sociologists. It’s not enough for me to just share my knowledge and perspective with other professional sociologists; it’s important to share it with the public so that we have another vector of truthfulness in the public sphere. Too, more people will be reading this than anything else that I have written… thousands and thousands of people will read this. I want people to recognize the dangers of our times, and wake up. What needs to be done after people wake up can’t be answered in comic book form, however.

WI: Is there a super-hero figure who you believe could restore America to “a United States of America” – one, as you wrote, “whose care, truth and beauty might still inspire us to fight for America, and not just over it”?

MK: Captain America; Black Panther; Ms. Marvel. Comics have been portraying these dilemmas for some time. In 2015, I wrote an essay, which was never published, about how different folks in the Republican and Democratic parties looked like different superheroes. U.S. Senator and presidential contender Bernie Sanders, for example, was Captain America whose character struggled with what it means to be an American. Of Captain America, one commentator wrote, “His greatest superpower was his ethical integrity.”

Only recently have I recognized that all the superheroes I identified were white, and were I to write such an essay again, I’d have to build on another exclusively white cohort of presidential contenders. I wish that there were a contender who would remind me of the Black Panther, not only because he is among my favorite reads, but also because of his link to the Black speculative tradition, so evident in the 2018 film and commentaries about it. That character invites us all to view possible futures in which all might be free. And respected. I love reading comics for just that liberating vision; Chuck Brown, Ta-Nehisi Coates, Eve Ewing, John Jennings, Stacey Robinson and others are transformational figures in the genre. It matters who creates heroes, and what those heroes challenge us to be, to do. I appreciate so much the opportunity, now, to be associated with this creative force.

WI: Who reads this comic? Where can people find it?

MK: It is written for very mature audiences, not for children. The hard copies of that first issue came out Feb. 19 and immediately sold out at my favorite local comic book store, Toy Vault, in Warwick, whose manager, John Dalton, is also deeply knowledgeable about the field (and saved me a copy!). I just learned, too, that the issue is sold out nation-wide, and a second printing is forthcoming. It’s also available digitally at https://www.comixology.com/ or Amazon.