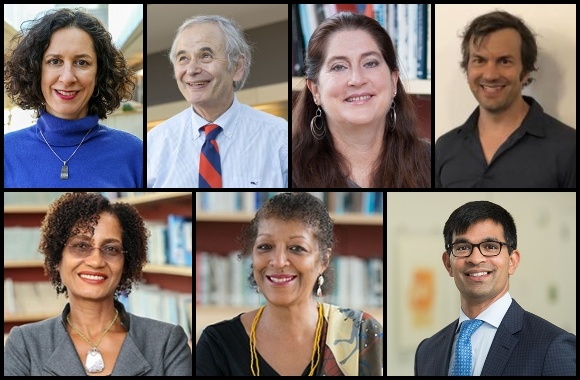 As of July 1, 2020, several changes in leadership have taken place at the Watson Institute.

Nadje Al-Ali, Robert Family Professor of International Studies and professor of anthropology and Middle East studies, assumed the role of director of the Center for Middle East Studies. She succeeds Shahzad Bashir, Aga Khan Professor of Islamic Humanities, who had served as director since 2018.

Senior Fellow in International and Public Affairs Richard Arenberg began a one-year term as interim director of the Taubman Center for American Politics and Policy, succeeding Susan Moffitt, associate professor of political science and international and public affairs, who had served as director since 2017. Wendy Schiller, currently chair of the Department of Political Science and a Watson faculty fellow, will become director on July 1, 2021.

Patsy Lewis, a faculty fellow at the Watson Institute and an expert on Caribbean nationalism and small states development, has been reappointed director of the Center for Latin American and Caribbean Studies after having served as interim director for the preceding year.

Jeremy Lehnen, Visiting Associate Professor of Gender Studies, was named the Interim Director of Brazil Initiative while James N. Green, the initiative’s director since its establishment, is on a one-year sabbatical.

Shankar Prasad, deputy provost for global engagement and strategic initiatives, is serving as interim director of the Institute’s one-year Master of Public Affairs program, which he was instrumental in launching in 2015, while Eric Patashnik, the Julis-Rabinowitz Professor of Public Policy and professor of political science, is on sabbatical. Olivia Whalen also joins the team as associate MPA director, having recently served as assistant director of admissions and recruitment for the Harvard Kennedy School’s MPA and MPP programs. Melissa Nicholaus will continue to carry out her important administrative work with the MPA program, while taking on new responsibilities to grow and strengthen Watson’s diversity-and-inclusion initiatives.