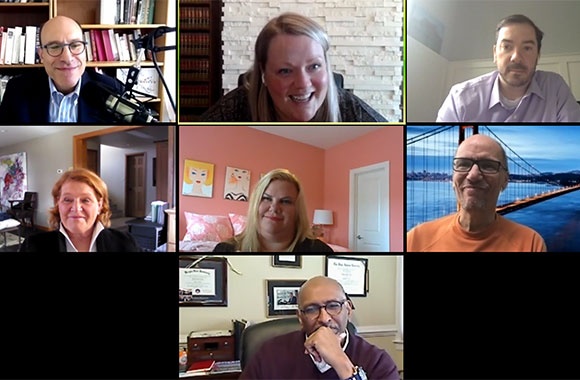 Virtually United: Maintaining a Sense of Connection Despite Geographic Separation

Since late March, after the spread of the coronavirus made it clear that campus would not re-open after spring break, students and faculty have been navigating the new world of remote teaching and learning. But even as classrooms were replaced by computer screens, the Watson Institute was devising innovative ways to continue to share content and keep students connected and intellectually engaged.

Moving quickly to respond to student requests for more career workshops featuring Brown alumni, Taubman and the Public Policy concentration coordinated panels on working in journalism, the nonprofit sector, and on political campaigns. Asher Lehrer-Small ’20, a public policy concentrator who had previously worked on a gubernatorial campaign in his home state of Vermont, moderated the latter panel, which had originally been scheduled as an on-campus event. “All the panelists were able to participate. Watson made that happen, despite the circumstances,” he says. “That was great.”

All senior fellows—including the writer ZZ Packer, former World Bank president Jim Yong Kim ’82, and Perez—offered to hold virtual office hours, and some maintained seminar-style discussion groups on such topics as the new unemployment levels in the U.S. and the 2020 election cycle.

Lectures, normally a daily feature of life at Watson, have continued as part of the new Virtual Events series. One, a conversation between Perez and Andrew Yang ’96 about the 2020 presidential campaign, the impact of Covid-19 on U.S. politics, and their student memories, was watched live by thousands of students, alums, and community members, and elicited hundreds of positive comments Watson’s YouTube channel.

Watson’s centers and programs were just as active in producing both new and previously scheduled lectures. The Center for Contemporary South Asia, for example, hosted a seminar featuring the field work of Brown graduate students studying the Indian government’s response to the pandemic.

The series also includes Virtual Faculty Lectures, which go live on Watson’s YouTube channel at 2 p.m. every Monday. As early as March 23—the first day of classes after the extended spring break—Carrie Nordlund, associate director of the MPA program, delivered a talk titled “Executive Power in the Age of Trump.” Other lecturers include Ambassador Chas W. Freeman on how the United States has responded to the China’s ascendance, political scientist Jeff Colgan and political economist Mark Blyth on the coronavirus oil shock.

Given the logistical and emotional challenges of the campus’s closing, students have been gratified not just by this continuity, but also by their professors’ efforts to adapt their courses to the online experience.

Joy Bestourous ’20, a computer science concentrator, found Colgan “incredibly engaging and informative” even before the pandemic. But she’s particularly impressed by how he has tailored his course, Geopolitics of Oil and Energy, to reflect the new reality.

“The first thing he did was to ask everyone to send him information on their circumstances and how they would feel about changing the grading system,” she says. Based on their feedback, he made the class mandatory S/NC. “Some students were dealing with sick family members or being in different time zones,” says Bestourous. “It was a great thing for him to do.”

Colgan also trimmed his lectures slightly, but without sacrificing any information. “He makes sure to strike a good balance between keeping us informed on what he wants us to know and not keeping us on line for two and a half hours, which is hard,” she adds.

Lehrer-Small, too, appreciates how supportive his thesis adviser, Taubman director Susan Moffitt, has remained. “She’s always there to offer guidance as I go through new drafts and rework chapters,” he says. “I emailed her twice this morning and she responded in 30 seconds.” Moffitt knows the situation has been trying for everyone, but is careful to be extra accommodating and responsive, he adds. “Her support has been huge.”

“Not only is she understanding and flexible regarding deadlines and requirements,” says Slaoui, who plans to concentrate in international and public affairs and Middle East studies. “She also always takes the time to ask her how we are doing and constantly asks us for our opinions, which has made me feel like I am an integral part of my and my classmates’ learning experience.”

Watson’s director, Ed Steinfeld, has high praise for the overall effort. “When faced in early March with what just weeks earlier would have seemed crazy—the need to shift to all remote operations—the Watson community stepped up. We did what we had to do to protect our collective health and safety,” he says. “But we did a lot more than that. By engaging flexibly and creatively in online education, and by participating eagerly in our web-based events and publics forums, we as a community reaffirmed the most fundamental values of liberal education. Just as important, we reaffirmed our care for one another. We still face many challenges ahead, but I’m proud of everybody in this community for getting us to where we are today.”